The Top Sports Shoes for Men 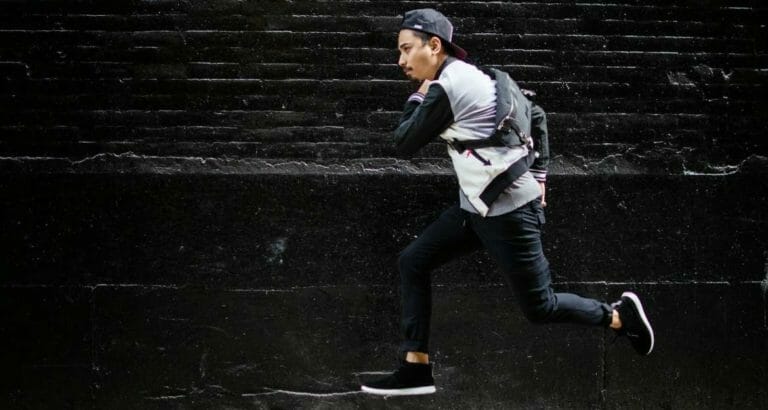 Needing to refresh your kicks? Deep diving into the history, we’re covering the best budget running shoes and where to find them.

Ever since the process of vulcanisation (melting rubber to fabric) was first pioneered, the sports shoe has enjoyed a cosmic rise in popularity. Brands like Reebok (formerly J.W Foster), Nike, Adidas, Asics, Converse and Vans have been pioneering new techniques, styles and methods for producing sports shoes, seeing them continuously develop and evolve with each passing year. They’re now a staple to every guy’s footwear collection and have become just as stylish as their smarter counterparts.

Whether you’re hitting the field, court or club, you’ve no doubt owned at least one pair of trainers in your life. If you’re purchasing some sports shoes for practical use, we wouldn’t suggest going straight to the fashion lines and instead head to the brands that specialise in mens running shoes.

When to Get New Running Shoes

When you’re doing something as repetitive and hardwearing as running then it’s important that your feet are properly supported with the right athletic shoes. Ill fitting running shoes can severally damage your feet so it’s vital that the moment your feet aren’t feeling fully supported that you grab yourself a new pair of running shoes. If you only occasionally use your running shoes then it’s unlikely you’re going to need to get a new pair that regularly. However if you run daily, or even weekly then changing your shoes is a necessary part of your exercise. I would recommend you change your running shoes between 450 to 550 miles.

Don’t be swayed by discount running shoes if they’re not absolutely right for your feet. The deal might seem good at the time, but when you’re hobbling down the street because your shoes are pinching that save in cash won’t seem worth it. In essence, new running shoes are important for your health, so it’s totally fine to splash out on that pair you’ve been eyeing up. For you, we’ve gathered the top picks of the best trainers.

How to Buy Running Shoes

In general, with something as important as running shoes it’s best to try them on before you buy them, however with hectic schedules and shoe shops being the way they are, that’s not always possible. If you’re planning on getting a pair of sports shoes from a brand you haven’t tried before then make sure that you carefully read their size guide. Some running shoe brands can come up smaller or larger than what you’re used to, so to avoid the hassle of returns make sure you know what you’re working with. 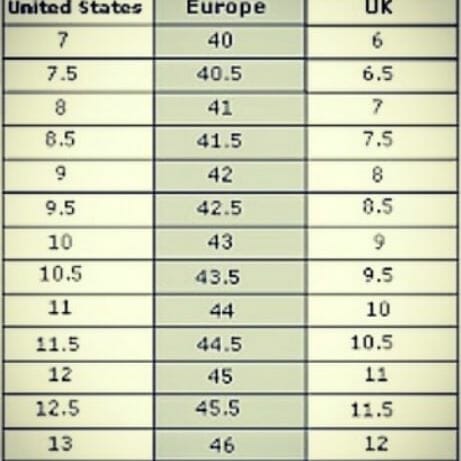 Way back in the 1920s marathon runners were taking on the challenge wearing shoes that resembled more of a formal bit of footwear rather than an athlete’s trainer, with The Ritchings Company producing rubber-soled shoes that weighed less than 10 ounces. Reebok was then the first company to develop marathon running shoes in
a more advanced way when they added running spikes to the bottom of their designs, as the biggest running competitions at the time were in track and cross country. Fast forward to the 1960s and you have what many credits as the first mass produced running trainer – the New Balance Trackster – with rippled grooves to prevent shin splints. 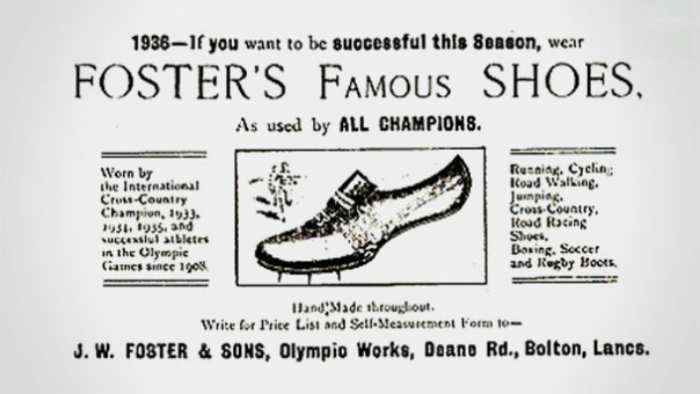 Running shoes have seen huge advancements in technology in more recent decades, becoming lighter, more supportive and shock absorbent every year. In even more recent times the runner silhouettes have been adopted and adapted for an alternative footwear option as men start to dress them up and pair them with previously unthinkable attire. If you’re looking for the most comfortable running shoes for practical use, head to brands like Etonic, Asics, Nike, Reebok and any other brands with history in this area.  If you’re just after that classic and sporty aesthetic, make sure you opt for their fashion lines rather than their actual running ranges. Their fashion lines are built with style in mind so tend to come in better colourways and a more versatile style.

If you’re not planning on hitting the road for a jog and you prefer the idea of styling a pair of shoes simply to look good, then something sleek and simple like a pair of all black running shoes is great for pairing with various outfits. Their versatility means you can match them with everything from jeans to joggers, and choose less athletic more affordable designs such as high top running shoes rather than expensive Lacoste sports shoes. 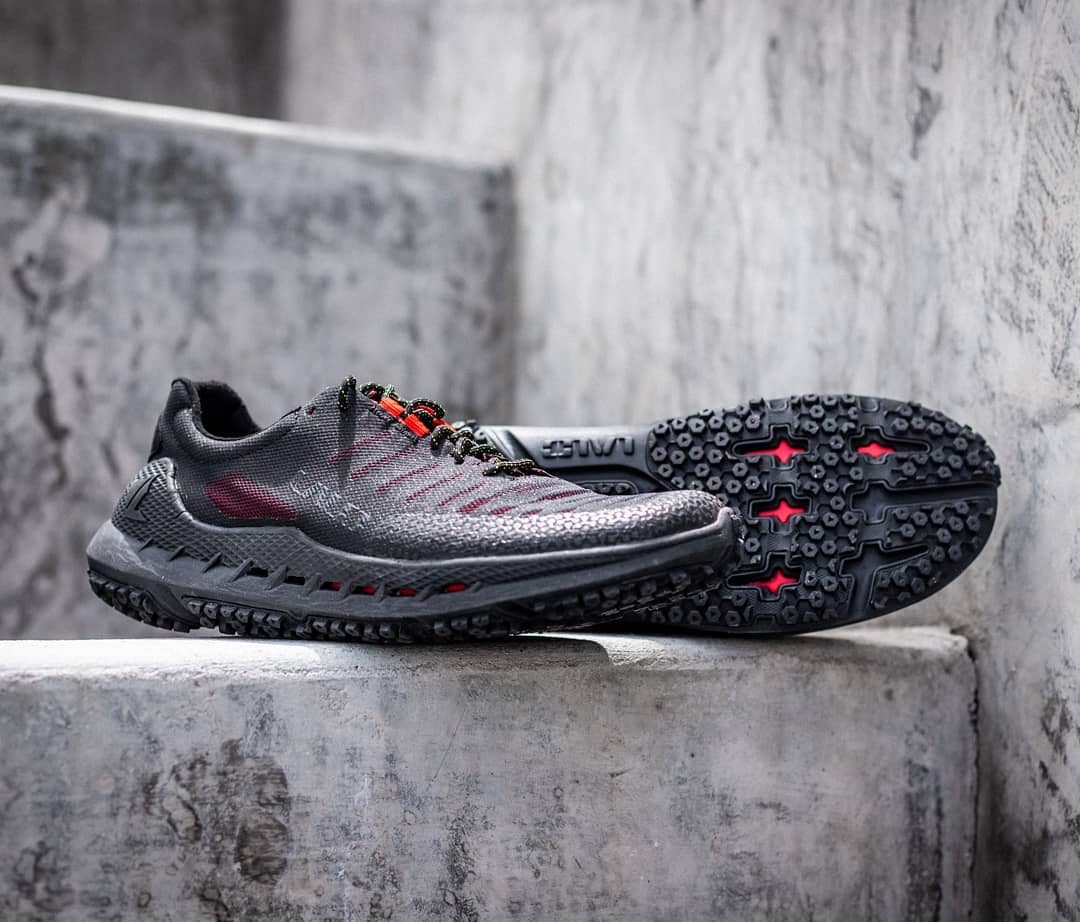 Ever since Romanian tennis star Ilie “Nasty” Năstase became the first tennis player to be sponsored by a brand, Nike, the tennis shoe has been designed by some of the biggest brands around, including Adidas, Fred Perry, Lacoste, Nike, Le Coq Sportif and even Gucci. From Nike’s waffle soles, Adidas’ streamlined silhouettes and Ellesse’s mesh finishing, tennis shoes have had a huge evolution of their own. 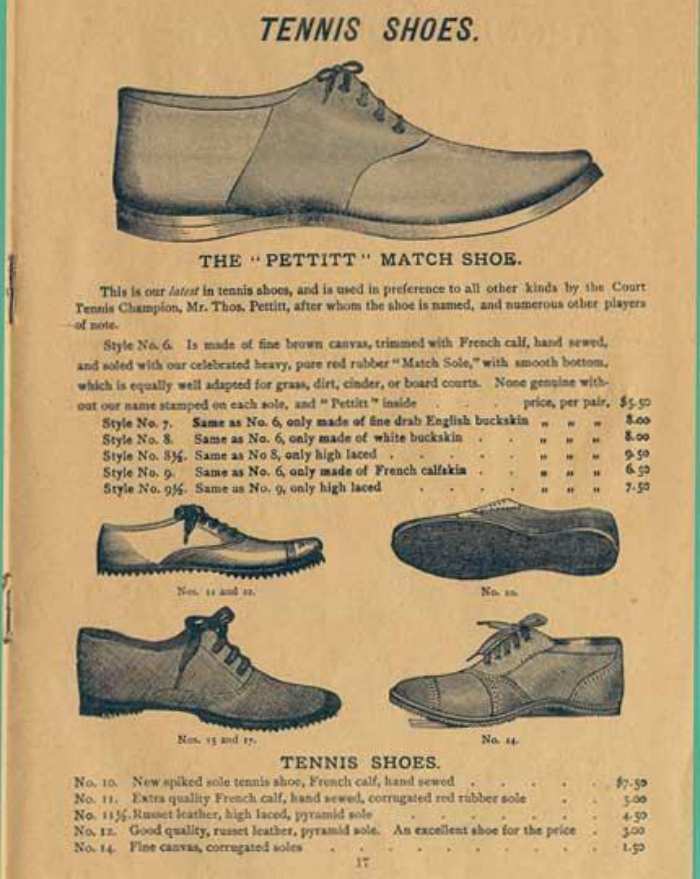 In style terms, they’re the perfect summer shoe for pairing with practically anything, from joggers to tailoring to denim. They’ve never actually faded out of style but we’re seeing a huge surge in popularity at the moment.

One notable style is of course the Stan Smith, a commercial and stylish number that still remains one of the most popular designs around. Just like the other styles in this list, the tennis shoe has also seen more premium designs hit the shop shelves of late, with designers like Common Projects delivering interpretations that could be paired with your finest tailoring just as easy as your weekend denim.

Mens tennis shoes are one of the easiest shoes blend in with outfits. You can match them with simple tailored looks such as skinny jeans and blazers, or more street style looks such as cuffed jeans and oversized hoodies. White running shoes have never been so stylish. 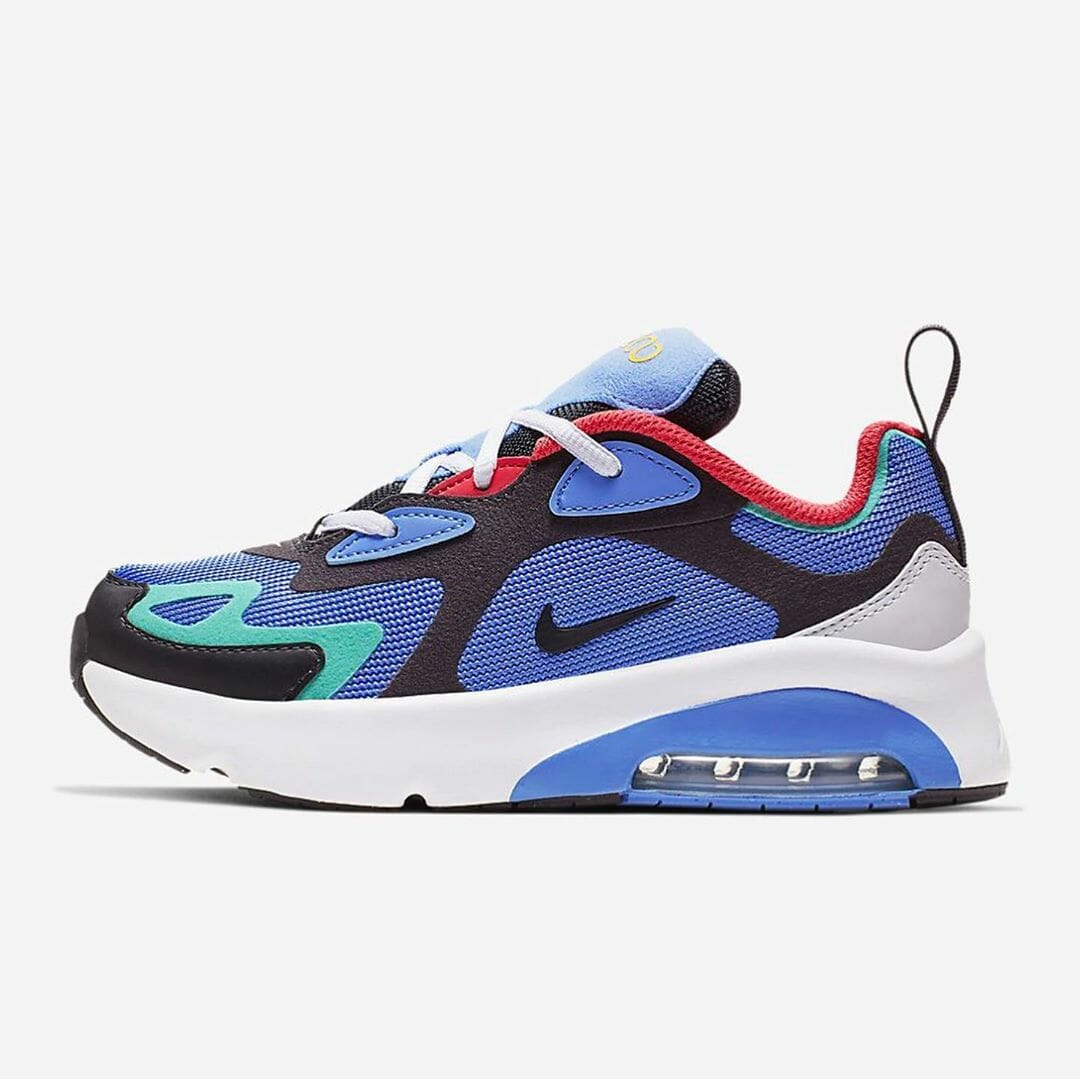 If you’re after a more alternative or (dare we say it) indie finish, you’ve got to be looking towards skate styles. The first skate-specific shoe hit the market in 1965, being produced by the Randolph Company and was a canvas top number called the Randy 720°.  Fast forward thirty years or so and the market was dominated by the likes of DC Shoes, Etnies and éS with chunky aesthetics, less desirable brands and a poor reputation. This combination of traits left skate shoes shunned by the style conscious. That was, until, the likes of Jordan, Nike and Vans entered the game. 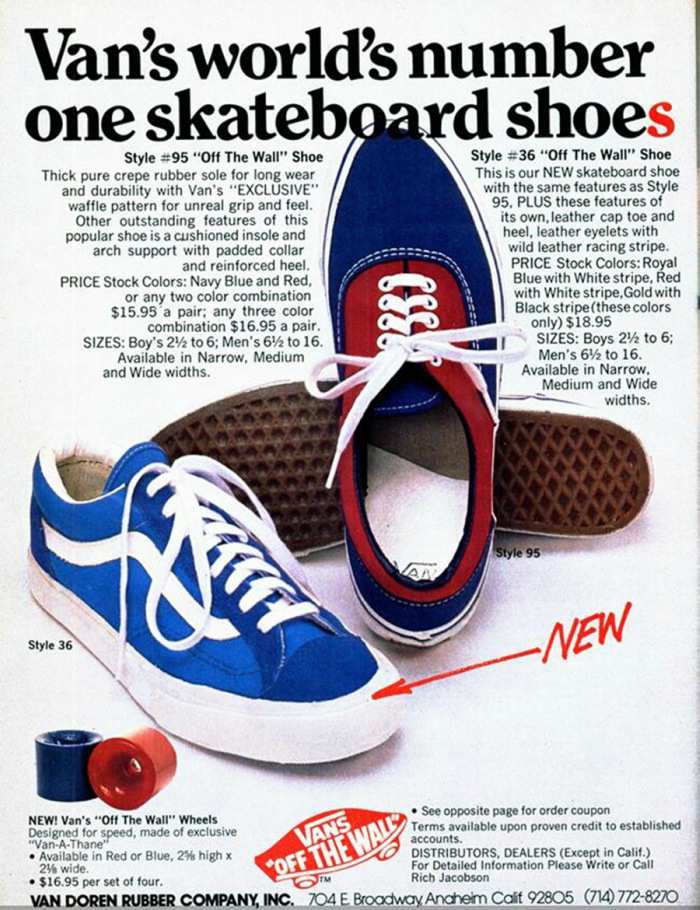 Personally, I’d stay away from the overly chunky styles that were popular in the early 00s/ late 90s and head for the more modern offering. With the likes of Nike SB and the absolute classic, Vans, now available in more streamlined styles, they’re the only skate shoes you need if you want to look the part, even if you’re not hitting the ramps yourself. Easily paired with any fit of denim (apart from boot-cut, obviously) and coming in a range of shapes and colours, there’s a Vans shoe out there for everyone.

With Vans perfecting the black and white running shoes look, it’s easy and convenient to get a comfortable and affordable pair of skater shoes. These, like the tennis shoes, can be paired with pretty much anything, but is best suited to more alternative styles. Try pairing a pair of skinnies with a checked shirt or oversized T-shirt for a relaxed yet stylish look.

Purpose-built basketball trainers go back to one iconic style we now all know and love – the Chuck Taylor by Converse. Dating back to 1917, the Chuck Taylor was developed by the man himself with Converse and was designed to give more support and grip on the court. It took another 55 years before Nike released their first basketball shoe, The Bruin, a drastically different design to their following styles.

Sure, they may not be as practical as Jordan’s, LeBron Xs or Kobe Vs but Chuck Taylors hold legendary status in the footwear game. Unlike other basketball shoe styles, the Chuck Taylor has barely changed in its near 100 year history, even with the release of the Chuck Taylor II in 2015.

High-top basket ball shoes are probably the most worn casual shoes of all time. With guys styling them with suits, shorts, and the casual jeans and T-shirt looks, there’s really not a lot that doesn’t go with these versatile kicks. They might not be the best sports shoes for taking a jog in, but when it comes to style they come up on top.

Where to Buy Running Shoes

Getting your hands on a pair of mens running shoes is something that varies in difficulty depending on what you’re looking for. If you’re going for the same shoe brand and design then you can easily pop online and grab yourself the same size as last time, knowing that it will fit just as perfectly as your old pair. If you’re hoping to get those eye watering, yet oddly stylish yellow running shoes you saw at the gym then you might be in for a harder time.

Quick Guide to The Top Sports Shoes for Men

There are a surprisingly large amount of sports shoes on the market, with many dating back from generations ago and maintaining a rich history that’s synonymous with their quality. With so many shoes to choose from there’s plenty of options not only for exercise but for your everyday look. Get the right brand and you’ll have shoes that you’ll trust in for years to come.

Where to buy a pair of Sports Shoes for Men