101 Spanish Tattoo Ideas That Will Blow Your Mind! 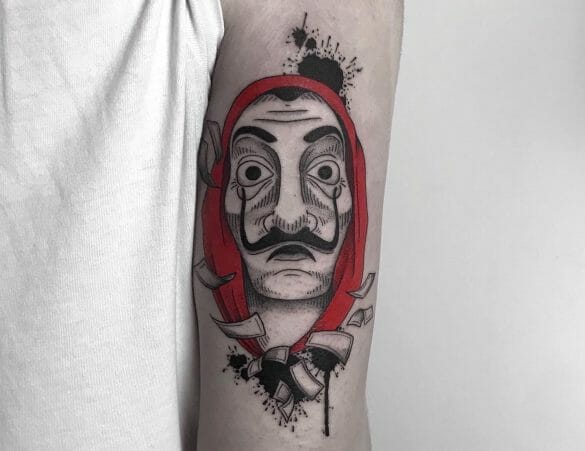 Are you absolutely fascinated by Spanish culture? Here are some fantastic Spanish tattoo ideas that are really going to upgrade your style.

Spanish culture is very popular and is an amazing way to borrow inspiration for tattoos and any form of art.

Some of the celebrated Spanish celebrities are Pablo Picasso, Pablo Neruda, and Frida Kahlo. They have been a very inspirational figurine to Spanish art and tattoo ideas. Women really idolize Frida Kahlo and get outline tattoos of her style statement on various places of the body. Pablo Neruda is one of the most highly celebrated poets by the young generation and his quotes are absolutely inspirational to the people. Pablo Picasso’s abstract art is a celebrated piece from generation to generation. They really are an absolute inspiration for great tattoo ideas. Kehlani, a famous American songwriter has really upgraded Spanish-style tattoos into the world and has made her own style statement. In 2016, a tattoo on Kehlani’s neck was recently made. It is loosely translated to “lost and found”. In Spanish, it says, “perdida y encontrada”. She has got this tattoo to commemorate her heartbreak. Besides these, she has other tattoos engraved on her body with Spanish words.

Spanish tattoos are absolutely versatile and one can get them any place they want. They can be done very well on a middle finger knuckle (which causes minimal pain and adds a great symbolism to have a crazy life), upper arm, right upper arm, left wrist, chest areas, and other places which really uphold all the traditions of Spanish culture.

The Spanish bull is considered to be a symbol of virtues and values in Spanish culture. Spanish bulls are greatly driven by the symbolic concept of masculinity as well as a feminine force. The tattoo over here is a fantastic interpretation of Spanish culture. The tattoo has been made by an unconventional artist and it looks absolutely beautiful. It symbolizes the free spirit of an individual as well as the implication of inner strength. The tattoo is of angry Spanish bullhead and there are red flames coming out of its head and nose which signifies that the animal is angry. The red ink for flames looks absolutely stunning and it is the ultimate choice for the best revenge tattoo. This is one of the most meaningful tattoo ideas ever and really a viable option for one in love with Spanish culture.

Mexican Tattoos For Both Men And Women

Mexican culture is more or less similar and identical to Spanish culture and looks really gorgeous at the same time. This tattoo is inked on the left side of the upper forearm of two dogs. Dogs are considered to be very loyal creatures and are symbolic to take care of a family. This tattoo represents that a wearer is extremely committed to the family and really wants their happiness. The color palette is absolutely gorgeous and is really worthwhile to stare at. The dog’s faces are made of turquoise blue and hues of orange and violet. It looks absolutely beautiful and the hues of this color palette look really enchanting. The plethora of colors that have been used in both the figurines of the dog looks really fascinating and magical. The tattoo is absolutely a must-have and one can really get it if they are a huge fan of such a vast and vivid color palette.

This particular tattoo of Spanish scenery is absolutely mesmerizing and really makes you stare at it all day long. The scene is considered a swan floating in the pond. It is almost dawn and the Sun is about to rise. The sun in this tattoo image is red in color. Red is a sacred color in Spanish culture. The water looks really nice where the shadow of the sun is falling and enhancing the scene. The entire picture has been made with red, blue, and pink hues of colors which really makes the old-school Spanish scenery tattoo stand out. Swans are a sign of peace. The wearer of this tattoo is promoting peace and stability and it is an absolute grab for a tattoo.

This tattoo should be considered to be the best of the lot in the context of Spanish tattoos. Spanish moss tattoos are quintessential tattoos that promote Spanish culture. Spanish moss tattoos symbolize inner peace and really enhance the sacrifice a family makes. It is a deeply symbolic tattoo of one’s family’s history. The color palette that has been used in this tattoo are hues of blue, green, and orange. In the tattoo image, it can be seen that there is a swan which is a spiritual symbolism that God makes. The Spanish moss tattoo represents an absolutely mesmerizing magical life. If you want to make a serene tattoo on your own skin to promote serenity, this can be an inspirational idea for your next tattoo.

Spanish have tried to acquire land in Southern colonies of America to implicate their dominance. Spanish conquistadors are valiant knights who used to maintain peace and security in those Spanish colonies. This particular tattoo is of a Spanish conquistador who is valiantly riding a majestic horse just as himself. This particular tattoo is a fine symbol of the family’s history and heritage and how they were respected in those colonies. This implies that the wearer has Spanish background and belongs to a family who was conquistadors. The tattoo is made with black and grey ink and the amazing hues of the tattoo look absolutely stunning. The horse also looks really fierce which determines and indicates the inner strength of the wearer. This tattoo is made on the right knee and looks really commendable. One can get this tattoo if they want to flaunt their Spanish culture and imperialism.

Salvadore Dali is one of the most celebrated Spanish artists who was famous for his representation of surrealistic art in the 20th century. His famous work, The Persistence of Memory is still etched in the minds of the tattoo artist. This particular tattoo acts as a tribute to Salvadore Dali and the popularity he has been gaining even in the 21st century as one of the most celebrated artists ever. The tattoo has taken inspiration from the famous series the popular culture: Money Heist. The tattoo looks absolutely lively and just mesmerizing. If Salvadore Dali inspires you, you can really get this done. You can even try a minimal version of it on your middle finger knuckle which is going to look really stylish.

La Casa de Papel or Money Heist is an absolute favorite series of the people who are ardent fans of popular culture. This particular tattoo is a fine example of that. The tattoo depicts the mask of Salvadore Dali and Professor, which is a character played by Alvaro Morte in this series. Below, there is also the image of the Royal Mint of Spain where they first began their heist. The tattoo looks absolutely realistic and gorgeous and really a commendable job has been done by the tattoo artist. The tattoo has been done on a right upper arm and looks perfectly healed. If you like tattoos that look absolutely realistic and majestic, you can definitely get behind this idea!

Pablo Picasso is one of the most highy celebrated artists of all time. His art has absolutely inspired millions of people and artists are still in awe looking at his art made by him. This particular tattoo is of an abstract image of line art. The art of Pablo Picasso inspires this sketch tattoo of a woman. The woman has flowers all over her hairband looks really surreal. It is a sketch tattoo that really looks mesmerizing and beautiful. This is a beautiful work of line art and the wearer really has sophisticated tastes. The tattoo also looks really healed and it indicates that the artist has been really amazing with their work. If you are looking for minimal outline tattoos, this can be a perfect option for you.

Cherry tree tattoos are really beautiful and absolutely enhance the beauty of the wearer. It is a tattoo that promotes transiency and is a wonderful floral symbol of love and beauty. This cherry blossom tattoo is a fine example of that. The cherry blossom flowers look really pretty and enhance the overall beauty of the wearer. This means that the tattoo wearer is ready to love and is really looking for a correct opportunity to fall in love. The hues of red cherry blossom flowers look really beautiful and are absolutely cherished. The tattoo placement is also very unique. You can get this done in any other body part as well. The tattoo itself is really pretty.

Spanish quotes and Spanish writing really do enhance the beauty of any Spanish tattoo. This tattoo is quite a fine example of that. The tattoo is of a famous Spanish quote, ‘Que Sera Sera.” This is translated to, “What will be, will be.” The tattoo looks really pretty on the left wrist of the wearer and is really an absolutely gorgeous idea to get a Spanish tattoo on the wrist. There is no visible inflammation and the tattoo artist has been really gentle with the wearer to make this.

Spanish tattoo is a really absolute delicate tattoo and looks really good on the people wearing it. Here are some amazing ideas for Spanish tattoos.

What is a good Spanish tattoo phrase?

There are a number of different Spanish tattoo phrases that you may want to consider. Some popular sayings include “Amor y respeto” (love and respect), “El amor es fuerte” (love is strong), or “La familia es todo” (family is everything). Ultimately, the phrase you choose should

What are some popular Spanish tattoo designs?

Some popular Spanish tattoo designs include traditional images like the Virgen de Guadalupe or floral and nature-inspired designs. You may also want to consider a quote or phrase in Spanish as your tattoo design. Ultimately, the design you choose should be something that has personal meaning to you.

What are some tips for choosing a Spanish tattoo phrase?

When choosing a Spanish tattoo phrase, it’s important to choose something that has personal meaning to you. You should also consider the placement of your tattoo and whether you want it to be visible to others. Additionally, it’s important to make sure that you choose a phrase that you’re confident you can correctly pronounce.