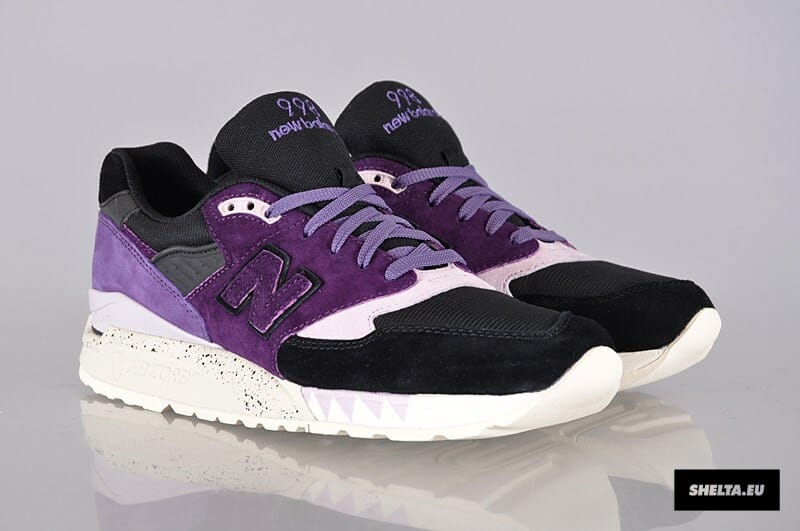 We won’t lie to you — when we first spotted the Sneaker Freaker CM998SNF makeup, we were excited. Then we heard that they were China-made New Balances, our excitement faded a little. After all, that’s the puffy toe capital of NB lifestyle releases and we associate the New Balance with a refined, premium, Maine-made form. We have a certain expectation when it comes to the 1993 classic. Then we handled a pair and had to shut up. Why? Because Woody and the crew were obviously concerned about the same things that trouble us. After a brief delay in release that took it from Sneaker Freaker’s tenth anniversary to the year after, that reassessment with regards to production has paid off. Three shades of premium suede (purple, purpler — if that’s even a word — and a violet) and a mesh that minimises the dreaded forefoot bulk all combine to make this a shoe that doesn’t suck.

We cant get down with a lot of the recent MT580s that are causing our server to cry at midnight, but we can understand the interest in Sneaker Freaker’s Tassie Devil. SF go wild with the Aussie and Trans-Tasman concepts (to be honest, we thought they’d be the first do do a cork shoe) and while we await a blood splattered ‘Ghosts of the Civil Dead’ themed Gel Saga II from them, their Tasmanian Devil effort is the best collaboration from them to date. We also like the donation being made to the Save the Tasmanian Devil Program. We owe those furry brutes some dough in return for the hours of happiness spent playing ‘Taz-Mania’ on the Megadrive. Having messed with purple (and a soft-porn comedy theme) on a Gel Lyte III, they’ve gone wild with the purp on this one and the tinkering on the sole unit is significant — a speckled section that isolates the ABZORB and some jagged ‘devil teeth at the forefoot, plus an off white rubber compound just works.

We know the quantities are extremely different, but we’re noticing a madness in consumers that mirrors Jordan-mania when it comes to certain New Balance and Saucony drops. We never really saw that coming. Kids are bugging over these kinds of drops and we’re only getting a couple of each size (rumor has it that the global distribution beyond Sneaker Freaker’s store is around 70 pairs and North America is being snubbed completely — as hype meteorologists we can forecast a server battering of some serious magnitude for everyone selling these online). Anyone still weeping about shape can grab one of the American-made restocks dropping this week, but for those interested in capturing a Tassie Devil can lay in wait at midnight on the 30th of this month. Be warned though — these are more of an endangered species than the animal they’re themed after.

Where to buy a pair of New Balance CM998SNF