Scorpion Tattoo Meaning – Everything You Need To Know! 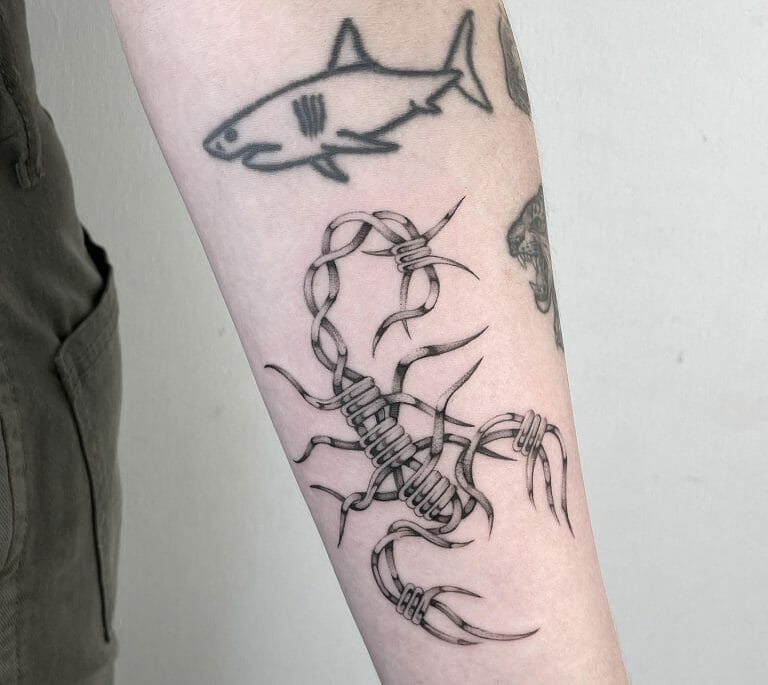 From being a constellation to a sign of death, the scorpion tattoo meaning can cater to the needs of all the tattoo enthusiasts around the world.

Regarded as one of the most frightening creatures in the insect world, the symbol of the scorpion has a very old origin and transcends different meanings in different cultures and religions.

The scorpion represents victory and protection from the enemy. It can even demonstrate a retreating stance of the enemy due to the intimidating nature and control of the insect just like the snake and lion tattoo.

The scorpion is one of the most popular tattoo designs both among men and women and can represent an array of meanings. Like in the Mayan culture it was regarded as a symbol of medicine and surgery whereas in African folklore the scorpion’s venom is mentioned to have paramount healing power. Even a scorpion tattoo is representative of powerful sexuality as the scorpions use a unique dance to captivate and mate with each other.

This simple tattoo design is very popular around the world and is mostly viewed as a symbol of animalistic strength. The predator is known for its deadly power and poisonous tail through which it pumps its venom and hunts its prey. These tattoos are mostly done in black ink and the preferred choice of placements include the chest, shoulder, back, ankle, arms, and neck.

Now, these simple designs when done in different countries represent different meanings. Like in Mexican and Cuban gangs a scorpion tattoo is mostly done by and represents a contract killer while in Russia a scorpion tattoo represents a person who has been in prison. Now again a scorpion with open claws indicates a person who has been in special forces. In some countries, when the scorpion tattoo is done with a sting up it means the person is a drug user whereas a sting down represents he or she has quit the drug addiction. Endurance, death, tenacity, evil, and perseverance are also other traits that are represented by this design.

If you are an ardent admirer of Egyptian Mythology then such a tattoo is the best one for you. They are mostly done as small scorpion tattoos on the wrist, back of the neck, and ankle. the choice of ink is mostly coloured which makes this tattoo more vibrant just like Egyptian signs and symbols.

As we know that the Egyptians were followers of pagan religion and worshipped nature, where the scorpion was greatly revered and feared and was associated with Serqet, Goddess of the dead. This goddess was the protector of the body and viscera of the dead and was also known to accompany them in their journey to the afterlife. For the people who believe in the afterlife, this is a great tattoo choice that will also serve as a fashion statement. Interestingly the Egyptian Goddess Isis who is the goddess of magic and healing is sometimes also represented by a scorpion, a cow, or a bird.

The scorpion and rose tattoo meaning is extremely contrasting in nature. One of the most famous tattoo designs around the world, the scorpion is mostly inked with black while the rose is done with red or vice versa. Both famous among males and females they are mostly inked in the arm, calves, thighs, and back of the body.

These scorpion tattoos act as a warning and symbolise the concept of ‘looks can be deceiving’; though the scorpion is small in stature yet the scorpion venom is a dangerous thing and can even kill a human. On that same note, a rose is known for its beauty and fragrance yet its thorns can hurt you just like a scorpion sting. These tattoo designs are preferred by people who are complex in nature and also act as a symbol of not getting close to the.

Done mostly as a realistic scorpion tattoo with vibrant colours this tattoo design is famous among males. They can be done in different portions of the body but requires quite a large space to blossom beautifully. The sword is a deadly weapon serving human beings from the dawn of civilisation itself whereas the scorpion’s tail is also regarded as the deadliest weapon in the animal kingdom.

When the sword and scorpion are together inked it demonstrates the traits of strength, fatality, protection, and fierceness. These tattoos are really popular among people who serve in the military and are known for their bravery and courage in battle. They are also done by dangerous outlaws to show their deadly nature and also portray the fact that if any association or communication went wrong the other person will meet his or her maker either with the cold blade or with the venom of the scorpion sting.

Located in the Southern Celestial Hemisphere the Scorpius is one of the forty-eight constellations spotted by the Greek astronomer Ptolemy. This zodiac sign tattoo design is quite simple in the tattoo world but greatly preferred by the tattoo artist and the client for its deep meaning. In Greek Mythology there is a tale where a fearsome hunter named Orion pledged to kill all animals on the mother earth. Gaia, the protector of animals and earth was ferocious about this and send Scorpio, a giant scorpion to stop Orion before harming anyone.

This Scorpio tattoo idea which reflects the Scorpius constellation can be done both in colour or in black ink. The places which are best for this design are the wrist, biceps, ankle, back, and neck. People born between October 23 to November 21 fall under this western zodiac sign. It can be done to commemorate one’s birthday falling under these dates, or as a homage to the Greeks. These scorpion tattoo designs can also be done as a fashion statement and the one who is born under this sign is mostly misunderstood due to their toughness and defensiveness but in reality, they seek emotional intimacy.

The small scorpion tattoo is done in the form of a minimalistic approach. Crisp, and clean they can be done either with black ink or with colourful ones depending on the person who is doing it. These scorpion tattoo designs are especially popular among women and are done in places like the shoulder, wrist, ankle, finger, and neck. The concept of ‘less is more’ is ardently followed both by the tattoo enthusiast and the artist doing the work and a variety of tattoo meanings can be obtained from it.

When done by a female this Scorpio sign represents feminine strength. Just like the scorpion is dominated by others in the animal kingdom, similarly, women are also exploited and controlled by this male-dominated world. Now not only strength but here the Scorpio represents the struggle for survival in this jungle, but never backs off. As with her cunning and the fighting spirit she never gives up, similarly the scorpion stings with its tail striking fear in the hearts of its enemies.

The tribal scorpion tattoo meaning will vary from culture to culture and also the designs will be different. Done in black ink these scorpion tattoos are mostly inked by men and the places of choice include the arms, legs, neck, back, and shoulder. From representing personality traits to demonstrating the heritage and achievements, the scorpion tattoo’s meaning depends on the person wearing it.

For a few tribes, it was a symbol to ward off evil spirits. The shaman sometimes also extracted the dangerous venom and used it as a medicine for protection. Due to this reason and also due to the untamed and attacking nature of the scorpion, the holder of the tattoo symbolises a person with protective nature.

Also known as the emperor scorpion, the black scorpion is regarded as one of the largest scorpions found in the forests and deserts of Africa. Though their venom is not fatal their sting is dangerous and almost as fearsome as a wasp. Their black colour looks extremely intimidating yet seductive.

The black scorpion tattoo thus demonstrates the symbols of extreme strength, limitless perception, ability to protect oneself, and potent sexuality. The sexuality, in particular, demonstrates the sexual passion, arousal, and courtship because of the unique mating dance done by the male and the female scorpions holding their pincers. They are mostly done by people who think of themselves to be mysterious and seductive.

These butterfly and scorpion tattoos are unique designs in the history of animal tattoos and are done both by males and females. They can either be inked with vibrant colours or can be done simply with black. Now the symbolism this tattoo demonstrates is extremely beautiful and potent. Mostly the concept of opposites is reflected by this design.

Where the butterfly represents innocence and life, the scorpion represents toughness and death. These tattoos require quite a great amount of space to blossom and the places of preference include the arms, legs, back, and chest. They are done by people who have both good and bad qualities in them and will behave accordingly to how they are treated.

A skull is the symbol of life and death, rebellion, and the afterlife as per common norms. Now when the skull is combined with the scorpion it becomes a deadly combination both in appearance and in meaning. This tattoo is mostly done in black ink and blossoms well in the arm, leg, shoulder, and back.

Whoever is the owner of this tattoo design people must be aware of them. The fearful combination is not only intimidating but also signifies them to be extremely dangerous just like the predator scorpion. They are mostly found among mercenaries and people with a dark past who on occasions can even take life.

Universally recognised as a fearful predator the scorpion tattoo idea is not only a cliched style tattoo but one which is famous among certain lanes of the world. From the demonstration of power and attitude to symbolising death and protection, this cool tattoo design is a must-try.

Other scorpion tattoo designs that can be tried by people are:

10 Best Samurai Tattoo Back Ideas That Will...