Roman Numerals Tattoo Meaning – Everything You Need To Know! 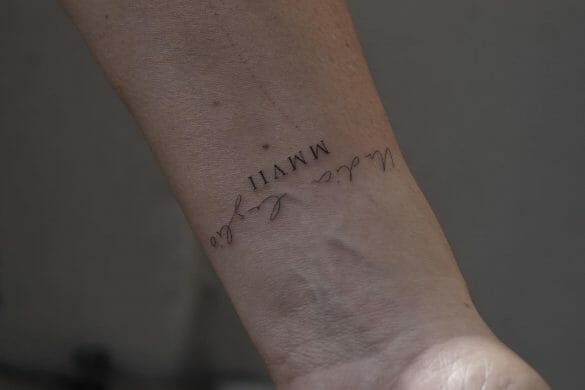 If you are fond of Roman numerals and use them in place of Arabic at times, then Roman numerals tattoo meaning with different style must be your cup of tea.

The origin of the Roman Numeral system was in ancient Rome.

Here the numbers are not represented like in the Arabic system but the Latin alphabet is used to demonstrate them. The system has seven symbols with a fixed value and generally follows the decimal system where numbers are written in tens, hundreds, and thousands.

Recently the Roman numeral tattoos have become very popular due to the mysterious and unique look it has than the traditional numbers. It not only represents a rich historical heritage but also can range from universal to extremely personal meanings.

This Roman numeral tattoo is becoming extremely popular due to the varied meanings it carries with them. Mostly done in black ink, the requirement of tattoo space is sizeable and is done on the chest, back, arm or legs. Now when a feather is added to a tattoo it mostly represents the tribal nature of the tattoo design and can be used with the infinity sign or as a dreamcatcher and with many more such cool ideas.

One of the boldest of places and eye-catching in nature this tattoo along with roman numeral numbers is a fantastic combination. The one with a chest tattoo firstly represents that he is scared of nothing and always will face everything bravely. It has become the symbol of masculine power, and strength. The colour palette for roman numerals on the chest is mostly black but other colours can also be used.

The roman numerals that are inked in the chest literally and symbolically demonstrate something close to the heart. Mostly any memorable date in roman numbers can be done on the chest either in a bold manner or can be combined with other designs like flowers or clocks. As this is an important portion of the body and the tattoo is quite large in nature it is not for everyone. On the pain scale, it is quite high and can cause severe discomfort, and not suggested by the tattoo artist for someone who is new to the tattoo world.

The story of Jesus’s crucifixion and the importance of the cross symbol is known worldwide. People who are ardent followers of Christianity mostly get the cross tattoo design done on their bodies. The choice of ink is mostly black and they can be done in different sizes which completely depends on the person getting it.

Now when Roman numerals are added to the cross multiple elements come into play. It can act as a contrasting and challenging statement as it was the Romans who crucified Jesus. This roman numeral tattoo design can also act as a homage and honour paid by the tattooer to his or her faith. Last but not least it can be done in someone’s fond memory who has passed away.

The collar bone roman numerals tattoo meaning is quite simple just like the place of choice itself. Dates of great significance can be inked on either one of the collar bones or can be done on both of them depending on the person doing it. This is quite an unusual place of choice for doing roman numeral tattoo designs and is mostly done when other places of the body are already inked.

The colour of the ink is mostly black and these roman numeral tattoos are popular among males. Other than using it for inking important dates it can also act as body art in its own way. Not everyone is suggested for doing this roman numeral design because it can be extra painful as it is directly done on the bone.

From representing an elementary concept of time to representing life and death, this Roman numeral clock tattoo design is simple yet elegant. They can be done either with black ink or with colourful ones and the places of preference include the forearm, calves, back, and chest. Now different clock tattoos with roman numeral designs represent different things.

When a sundial is done with Roman numerals it represents the clock as one of the most ancient inventions of human civilisation leading back to the Sumerians, when done in a melting manner it represents delusion or vigorous experience of time, and when done with a grandfather clock it demonstrates nostalgia. It can be also done by people to symbolise a particular date and time which is of grave importance to them like the time of their child’s birth or marriage date. The Roman numeral clock tattoos also remind people of how temporary time is and the importance of spending that time with their loved ones.

Regarded as one of the most versatile places to get inked by any design of your choice is the forearm. When roman numeral tattoos are done on the forearm they blossom like wildflowers and just look gorgeous. Now, this arm tattoo can be either done in traditional black ink or in multiple colours, and the placement can be on the arm’s underside or on the upper portion.

The arm tattoo design can have as few as one roman numeral to several ones and can represent many different elements. From portraying a specific date like someone’s birth date to paying tribute to someone, one can very much achieve such ideas with this tattoo design. Both popular among males and females one thing must be kept in mind while inking with these tattoo ideas that something personal must be done which will add volume to the tattooer’s personality.

Floral design is one of the most customisable designs that can be combined with several elements to extract a variety of meanings. Rose roman numeral tattoos are one such of a kind that is very popular among males and females. The colour of the rose ink may vary from red to blue but the roman numerals are mostly done in black ink.

Rose has been the symbol of grace, beauty, love, and affection for many centuries and when they are done with roman numbers they represent important dates. The rose roman numeral tattoo can demonstrate someone’s wedding date and is mostly done with a clock to show the eternity of love, it can represent the birth dates of someone important and any special date which is the close to the tattooer’s heart.

From using it as body art to inking an important date this roman numerals design is done in a minimalistic way. They are done in a clean and simple fashion and look super cool on the wrist, neck, ankle, and fingers of the person who has tattooed it. The concept of less is more is implemented here and the number of digits may vary from a single one to multiple ones.

The small numeric symbols make an equal statement as in the large illustrated one and are mostly done by people who want to own a tattoo but not flash it to everyone all the time. People working in certain jobs may be barred from doing large tattoos, so they choose these small yet elegant designs which they can cover up with their shirt or pant depending on the place they have done.

Considered one of the most widely popular tattoo designs around the world the wrist tattoo can be done either on the underside of the wrist or on the anterior side. The ready visibility of the tattoo makes it both inspirational and also a work of beauty. The size of the tattoo depends from very small to small and also can be easily covered by clothes, ornaments, and watches.

The roman numerals tattooed on the wrist can demonstrate various elements. They can be either someone’s first tattoo or represent significant dates of a person’s life, or some can even get inked with their own birthday. Previously in ancient times, it was believed tattooing on the wrist was a way to radiate out spiritual energy. They became a fashion statement and were later inked by adventurers and sailors. Again in the 1950s and 60s, the wrist design also became the symbol of sexuality. The choice of ink for the roman numerals tattoo design completely depends on the person who is getting it and can range from simple black colour to multiple hues.

This is one of the most personal tattoos on this particular tattoo list. When people are in a relationship for a long time they want to create something that will stay with them forever and what better than getting a matching couple’s tattoo. They can be either done as a rib tattoo, or a neck tattoo, and even sometimes on the wrist, and the choice of ink is mostly black. Depending on the position of the tattoo the size of the roman numerals range from small to medium.

The date written with numerals can signify multiple important events like the date of the wedding day, the date when the couple met each other, or when their first child was born. Sharing these dates with a special person and tattooing them is the ultimate way of showing love towards each other.

Though the Roman numeral system has been replaced by the Arabic one for its simplicity it has still not gotten out of date. It has been used by tattoo artists and tattoo lovers for its design due to its royal and magnificent look.