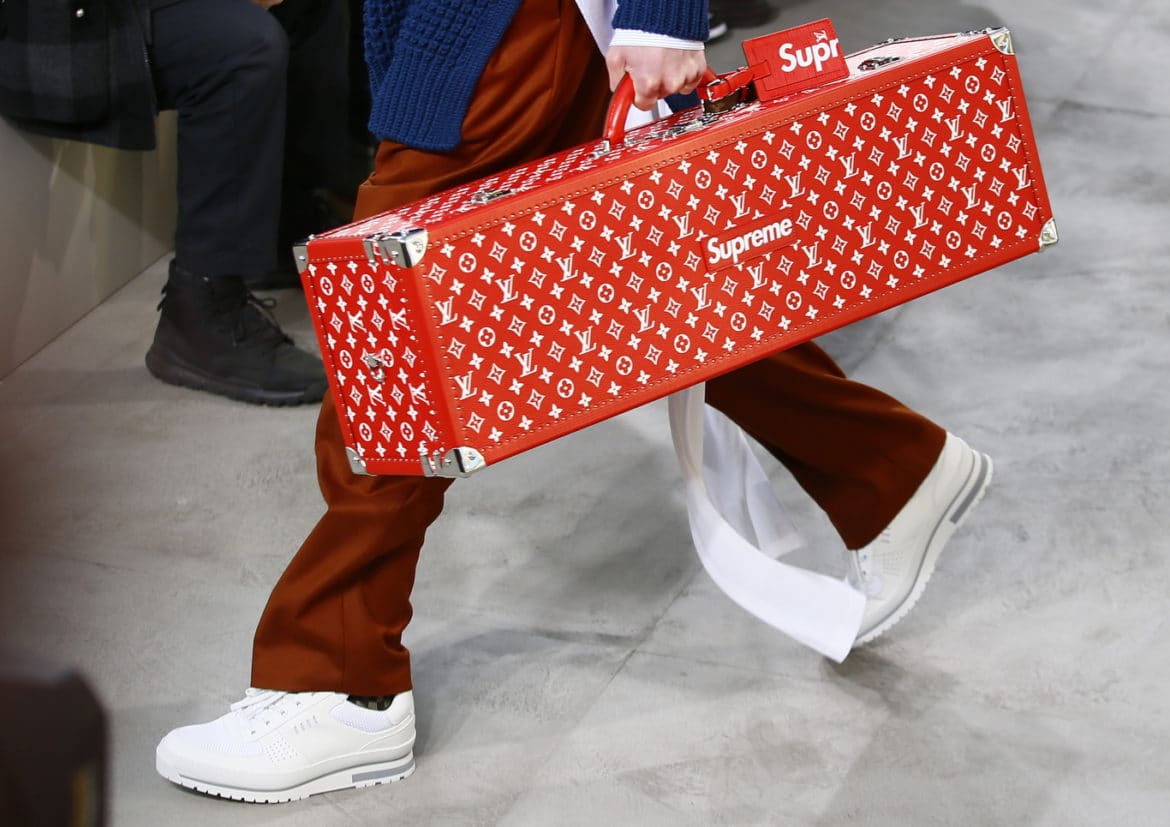 Sure, it may seem as though everyone has a piece of Supreme nowadays, but you can almost guarantee that any of the items you see someone wearing on the street won’t be accessible to you anymore. Due to the way that Supreme functions, pretty much every item they have put out in the past are no longer available to buy. Here we list the rarest Supreme products ever, so don’t even try to get your hands on these.

Supreme is one of the most hyped, if not the most hype, brand in the world. It’s no secret that when a collection drops on a Thursday of the two ten-week Supreme seasons, the queues to Supreme stores are seemingly never-ending. People queue for hours on end just to get a foot in the door on a drop day and even then you can’t be guaranteed to actually get your hands on anything once your time inside a store comes. The same goes for online. Each Thursday the online store is swamped with so-called ‘hype beasts’ trying to get their hands on the latest releases, often to no avail, but sometimes with a little success.

So you can almost guarantee that you will never get your hands on basically all the products Supreme has ever put out. The hype is so high that unless you have a spare few thousand pounds to spend on resold products, then basically you can say goodbye to your hopes and dreams of getting your hands on that limited edition box logo T-shirt from 2003.

Here we’ve done a bit of digging and have unearthed the rare Supreme items to date (i.e. these are the products you should not even consider for your wish list). These are so rare that they basically aren’t in existence anymore, and if they are we highly recommend you keep it a secret as otherwise, the die-hard Supreme fans will be after you.

This is one of the rarest Supreme box logo T-shirts to date and was originally released in 2003. In 2007 it was re-released which was then followed a few years later with special friends and family drop. Recently it has been worn by the likes of Kanye West and 2 Chainz (who is proving to be a massive Supreme fan).

It was a shock that it took so long for Supreme to collaborate with Nate Lowman, mostly due to the fact that the artist’s bullet hole design has graced the walls of the original Supreme store since day one. While he is not one of the most famous artists that Supreme has worked with (Larry Clark, Damien First, Jeff Koons, etc), he is embedded in the brand’s DNA. In 2007 Supreme finally enlisted Lowman to help them create a new set of decks and these featured the bullet hole design. The decks, however, were made only available to a few select employees and have since become some of the rarest decks to date. If you’re lucky you can try and snap one up on eBay, although this will set you back upwards of $5000. You can also spot one hanging in the Gagosian Gallery on Madison Avenue, New York City.

This T-shirt is one of the least known and least talked about in Supreme’s history. This is largely due to the fact that it was never actually released. It was a sample that was rumored to be inspired by American actress and show star Mitzi Gaynor and on the T-shirt. Gaynor is seen dancing in a dress that undeniably features the Supreme logo. Never officially released to the public, the T-shirt has fallen into the hands of some, mostly friends and family of the brand.

This is one of the most legendary Supreme pieces and only 11 were actually ever manufactured and sold. Due to its exclusivity, it is one of the more secret Supreme inventions and very few people have actually heard of the motorbike jacket’s existence. Zech Renteria, the man who began designing for Alpinestars in 2003, essentially met Humberto Liechty, who at the time was running the Supreme L.A. store, and the pair decided to put their creative heads together and collaborate.

Humberto and Jon Warren designed the layout and ended up using brands like UNDFTD, Stussy, and Taka Hayashi’s Vans Syndicate logos across a series of 11 jackets, which were made in Asolo, Italy. This is a jacket that is 99% guaranteed to never turn up on one of those online Supreme forums where teenagers sell and trade their old bits. You’d be extremely lucky to come across one of these, as they weren’t ever actually for sale and were just gifted to close friends of Supreme.

This was exclusive for friends and family, so it is still pretty difficult to get your hands on, although compared to the rest on this list, it’s probably not one of the rarest we’ve dragged out of the vaults.

Rumour has it that this was the original concept for the Supreme x Nike SB 2003 collaboration and so getting your hands on the original sample is near impossible. Initially, it was going to be a Nike SB Dunk Low Pro silhouette delivered in 3 colorways which referenced Nike’s “Be True” campaign in 1986. The original design featured gold Nike logos on the upper design, but this was rejected and instead replaced with stars. The low-cut shape was instead switched out for high tops, as is now seen on the pairs that were actually released.

In 2010 Supreme was celebrating its 16 year anniversary and part of this included a T-shirt that featured the Rizzoli cover. The brand also collaborated on a book that flew off shelves, but it’s the T-shirt that really caused a stir. The T-shirts were only available to employees and so are practically unobtainable to anyone else. Don’t put one of these on your birthday wish list.

Forget box logo T-shirts and hoodies, this was one of the items that were made in such a low quantity that it’s near impossible to get one now.

Unreleased and never hitting stores, this is a Supreme product you will never get your hands on, as it literally didn’t make it to production. A reason for this may be due to the backlash that Supreme knew it would cause. Still its a pretty cool deck that we hope exists somewhere.

The Rolex x Supreme Submariner watch is one of the most coveted and sought after Supreme pieces to date. Initially previewed as part of Supreme’s Spring/Summer 2013 collection, it is believed and rumored that the watch was limited to just 20 pieces and was only gifted to friends and family of Rolex and Supreme. The watch is a typical Rolex design with the words ‘fuck em’ on the front and a Supreme box logo on the back. Online reseller Stadium Goods did have one on their site at one point, but the price wasn’t for the faint-hearted or the average person. Coming in at $50,000 this is one of the most expensive Supreme resells to date.

Released back in June, the Coleman x Supreme mini bike went on release and was one of the most sought after pieces yet. It took the form of the CT200U, which offers specs like a 196cc one-cylinder four-stroke OHV engine, sturdy metal frame, 42-inch wheelbase, and a top speed of 24 mph. Weighing in at 112 pounds, it was a sturdy bike that was well worth the money and it’s all red frame was as Supreme as you can get. Supreme fans will also notice the ‘Ride or Die’ wording on the frame of the bike. While extremely rare, there is one Coleman x Supreme mini bike floating around on the internet for £2,999, so if you have the money, you might want to get your hands on it.

Back in 2005 Supreme teamed up with the Sopranos to release what has become one of the rarest and most sought after Supreme t-shirts of all time. The box logo T-shirt featured the traditional Supreme wording but the ‘r’ had been changed for the Sopranos gun logo. In May 2017, online reseller Grailed put one of the T-shirts on its webshop for a price of $5,400, making it one of the most expensive Supreme box logo resells to date.

Back in 2003 Supreme hooked up with the Russian conceptual artist Andrei Molodkin on what was to become one of the rarest and most expensive Supreme T-shirts ever. The T-shirt that the pair created was red in color and had a picture of Meg Ryan on the front underneath a Supreme box logo in navy.

The T-shirt is so rare that only one of two of the samples ever to be made seems to still exist. The other one is an Andrei Molodkin x Supreme T-shirt which has a picture of President Donald Trump emblazoned on the back of it (this itself sold for $8,600).

Earlier this year, the Andrei Molodkin design that featured Meg Ryan fetched $15,000 when an anonymous buyer got their hands on it. That’s more than the price of an average car!

Of all the Supreme box logo T-shirts that exist, the sample version has to be one of the rarest and not to mention one of the strangest. The brand took its standard box logo design and essentially defaced it, scribbling out the wording, leaving just enough to make it readable to those fans who wanted to get their hands on this.

When Supreme and Louis Vuitton’s Creative Director Kim Jones announced that they would be collaborating, so-called hypebeasts and Supreme fans were rejoicing. The collaboration had been rumored for a while and nothing had happened since Supreme bootlegged Louis Vuitton’s monogram way back when (and were met with a lawsuit). However, fans weren’t so pleased when the two brands also announced that the collaboration wouldn’t be full of products at Supreme’s relatively low prices (in comparison to those of Louis Vuitton) and instead they would have to pay the same price as they would for products from the French brand.

This was even worse though and due to the collaborative limited edition aspect, prices soared even higher than Louis Vuitton’s usual price marking. One such item that was on most people’s wish list was the Supreme x Louis Vuitton trunk. Louis Vuitton itself is embedded in trunk making – the man himself was just 16 years old when he made his first one, thus spelling out the future of the French brand.

The collaboration saw the creation of two trunks. Both the Louis Vuitton x Supreme trunks are bespoke and are only made-to-order and that’s why they come in at such hefty price tags. The Boîte skateboard trunk retails for $46,000, and the Malle Courrier 90 trunk comes in at a massive $57,000.

Due to their high price points, the trunks have become some of the rarest items out there, practically because no one can afford for them to be made.

While Supreme flies of the shelves and there’s a high chance you’ll never get the opportunity to buy a lot of it again, there are still those items out there that are a whole lot rarer and harder to track down others. From the fan-favorite Rizzoli x Supreme T-shirt to the slightly bizarre Supreme sample T-shirt with the scribbled out logo, above we have rounded up the rarest of all Supreme clothing and accessories.