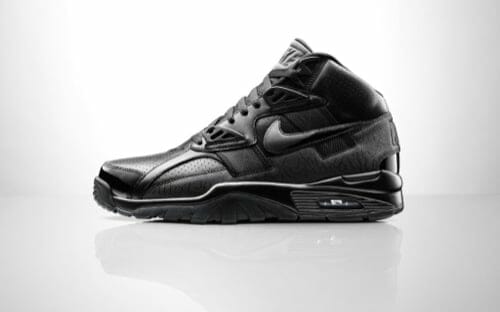 It’s back again in black and we don’t know why we’re suddenly being assailed with one of Bo Jackson’s finest footwear moments. We’re not complaining though (and we believe some OG colours will be arriving in the store at some point soon). Nigel Tufnell from Spinal Tap would approve of Nike Sportswear’s none more noir approach to the Air Trainer SC, but just in case one material wasn’t black enough for you, this goes black-on-black-on-black with three shades of black. The latter might sound like poorly-written erotic literature, but this shoe’s blend of textures actually works. With any other colour, this would be a busy car crash of a shoe, but with a good quality leather (not the usual plastic variety that’s depressingly common on cross training releases nowadays), some patent panels and some elephant print texture, it’s a pretty tactile approach to training. Plus this shoe feels like something somebody would pick up from a secret Shepherd’s Bush shoe spot back in 2001.

We have a soft spot for blacked out versions of shoes we loved in the late 1980s and early 1990s because they remind us of the cool kids at school (the OG influencers) who rocked them with school uniform as sartorial subterfuge. And yes, elephant print is played out when it’s not on a Jordan III or XI Low, but way, way back when it was on random Nike Pegasus, Airliner Cortez and Windrunners, it was a treat so see on a shoe and circa 1988 when it appeared on an incredibly hard-to-obtain Air Trainer, a true grail was born.

While it’s a very different design, this variation feels like a descendant of that classic. The triple black isn’t for all tastes, but for those who like this kind of thing, we recommend handling a pair, because they don’t feel like they’ve been manufactured from a bin bag. Matt, gloss and elephant skin on one of Tinker Hatfield’s definitive moments makes for something quite good that gives this shoe a certain luxury stealth that suits those sailcloth-assisted details and the intimidating silhouette.

Where to buy a pair of Nike Air Trainer SC