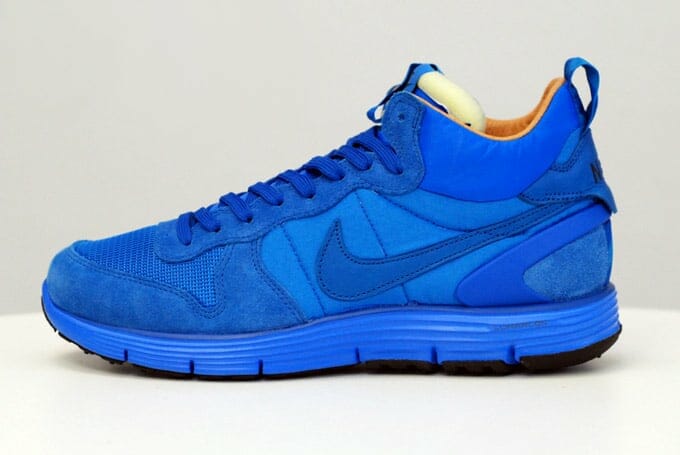 For about 5 seconds we thought these were going to be Italian-made to complement Nike Sportswear’s Italian-made apparel. They’re not, but we’re pretty impressed nonetheless. Playing Dr. Frankenstein with some old favourites and new styles can go wrong, but these pieces of the new-wave of NSW footwear that falls under the White Label banner are not bad at all.

We’re in no doubt that the Inneva Woven’s going to eclipse the Lunar Solstice Mid SP when they drop at the end of this week, but these do a lot right — the NSW Air Solstice was a great update of old Nike D.N.A. with the Nike Internationalist styled upper and these mids apply some new Nike Lunarlon technologies as a sole unit, plus the floating TPU heel counter that locks the foot in place. After the polarising bizarreness of the Lunar Epic, these are a more careful fusion of the old and new, with a lot to like — especially with that nylon collar application and perforated tan lining, heel and tongue tape (like the old KZK ObyO Hiker), plus the exposed foam on the tongue.

Looking for logic and a lineage in the Solstice Mid could give you a headache, but there seems to be a cue from every element of Nike’s running history in there somewhere. This all-blue Smurf colourway’s shades of blue aren’t easy (an accompanying black makeup is far more easygoing) and they aren’t cheap, but they mess with tones and textures in a way we’re feeling.