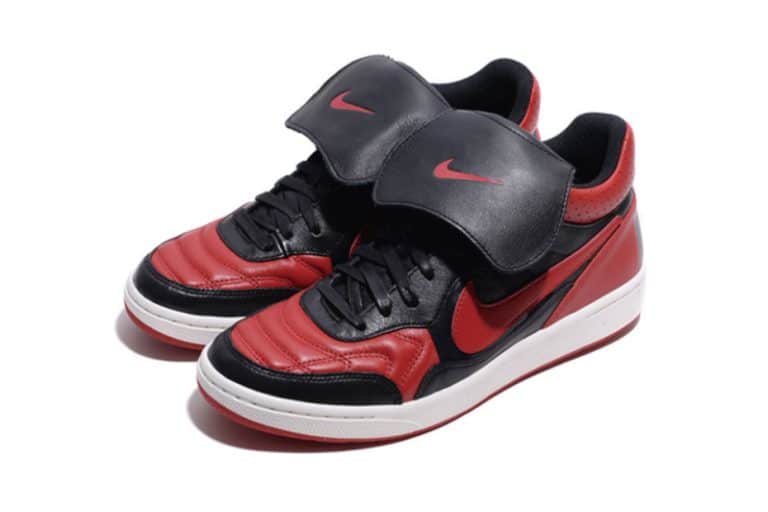 Football shoes and casual styles don’t necessarily work well together. Sure, there’s some exceptions, but rocking training shoes that weren’t Sambas has been fraught with issues. There’s been exceptions in recent years — the Lunar Gato, the SB Zoom FC (massively underrated) and the Zoom Tiempo remix for bikes spring to mind. Remember when the Total 90 Indoor and its related apparel had a boomtime via high street sports shops? While we love the shoe, that wasn’t a strong look. The Zoom Italia Indoor shoe is a slept-on football shoe too. The Nike Tiempo 94 takes the Nike Tiempo Premier, introduced in 1992 (but this is more of a 1994-style upper) that was on the pitch during the 1994 World Cup final on Maldini and Romário’s feet — and a shoe endorsed by Fowler, Wright and Cantona — to remix it for everyday wear with a non-training sole and removable fold-down tongue. We generally wouldn’t pay this shoe much mind because our connection between football and footwear that isn’t boots on the Nike side would come through the Wimbledon, Internationalist and Terra T/C, with their brief moments on the terraces back when the original 1984 Tiempo dropped, with the strange Ian Botham endorsement on the ads. But the Jordan colourways here are pretty good — apparently put together because Zidane baiter Marco Materazzi is a Jordan fan. In fact, these are made of the leather that we’d like to see AJIs be made of and 1994 is also the year when, during MJ’s retirement, Nike put the original Air Jordan out to an audience who, for the most part, opted to leave them on the shelves. Now it’s a completely different story but we can’t help but think that, if Maldini had laced up some boots in those Chicago colours back in the day, we would have spontaneously combusted. It’s a shame that these aren’t the real deal with studs, but if this is your kind of thing, the Nike Sportswear Tiempo 94 ‘Jordan’ pack is in the store right now.