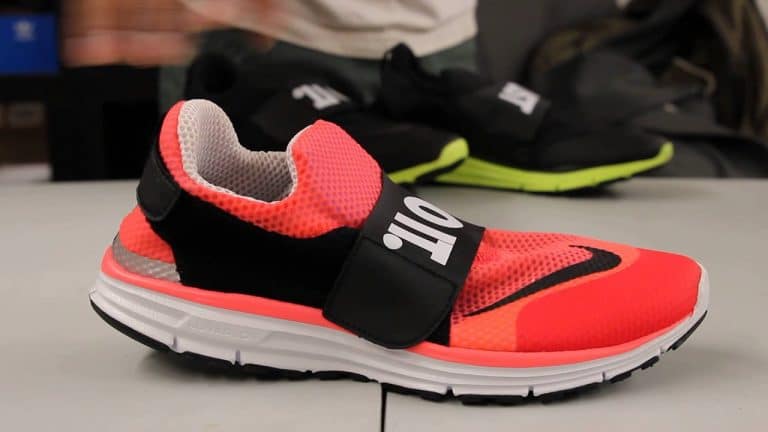 On paper, the Nike Lunar Fly 306 Quickstrike is a terrible, terrible shoe. Laceless, with bold colours and a slogan across both feet? That shouldn’t work. But strangely, this shoe does, following in the obnoxious footsteps of the Sock Racer, Aqua Sock, Presto and the underrated Sock Dart. If this wasn’t released in the knowing, postmodern, digital age, it would have had an incredible W+K helmed ad campaign behind it. Looking like a running shoe with a built-in flip-flop, it’s the decision to pair a vast JUST DO IT in the classic Futura Condensed Extra Bold, split between left and right feet with a 1990s style forefoot swoosh that’s dumb, yet weirdly effective.

With Nike’s most famous slogan resurrected this month for a new campaign, it’s always worth remembering that it was actually inspired by the last words of cold-blooded killer Gary Gilmore as he egged on the firing squad in early 1977. That makes these shoes seem kind of subversive. If you can deal with that call to action across your feet, you’ll appreciate the lightweight feel, sock-like fit, breathability and Lunarlon cushioning that makes them a garish sibling to the equally strange and comfy Solarsoft releases from the last couple of months. Despite the cutting-edge technologies, these can easily sit alongside some of Nike’s more bizarre novelty creations of the ’88 era when this campaign first launched and Nike were locked in a constant corporate combat with the Reebok corporation. While this summer-centric shoe seems to have been released at least a month too late, all three Nike Lunar Fly 306 colourways are in the store right now.

Where to buy a pair of Nike Lunar Fly 306