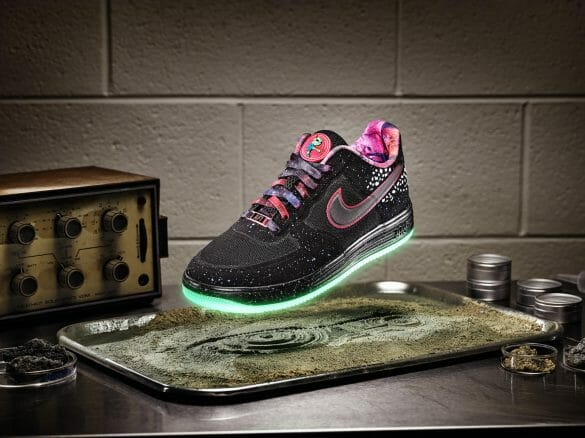 The Nike Area 72 pack isn’t for all tastes (yo, if you can pull off the Barkley Posites, we salute you), but having had the shoes in the office for the last couple of days, we think the level of insane detailing from the NSW design and colourway team deserves a closer inspection. Nuance doesn’t exist in this dojo, but the transparent panel on the heel of the Vandal, the Galaxy patterned laces, the logo treatments and the commitment to going HAM with the speckles is commendable. The Nike Air Force Max 2013 is actually the best in the collection (in our humble opinion of course), even if we can’t see the purpose in updating this 1993 classic with seamlessness. That Sir Charles classic remixed’s metallic accents, mesh underlay in the toebox and glow-in-the-dark elements feel like the best follow up to to last year’s intergalactic All-Star Weekend festivities. But these aren’t for us oldies — they’re for the younger generation who want that Instagram ‘like’ fodder that makes a statement that’s loud enough to be seen from space. We’ll have to make do with this week’s M990Ns on our feet, but as high concepts go, the Nike squad went all out with these and it’s nice to see that the basic boxes have been given a little tweak with their labeling for the whole pack too. Good luck hunting them down if you’re hyped on these

Where to buy a pair of Nike Sportswear Area 72