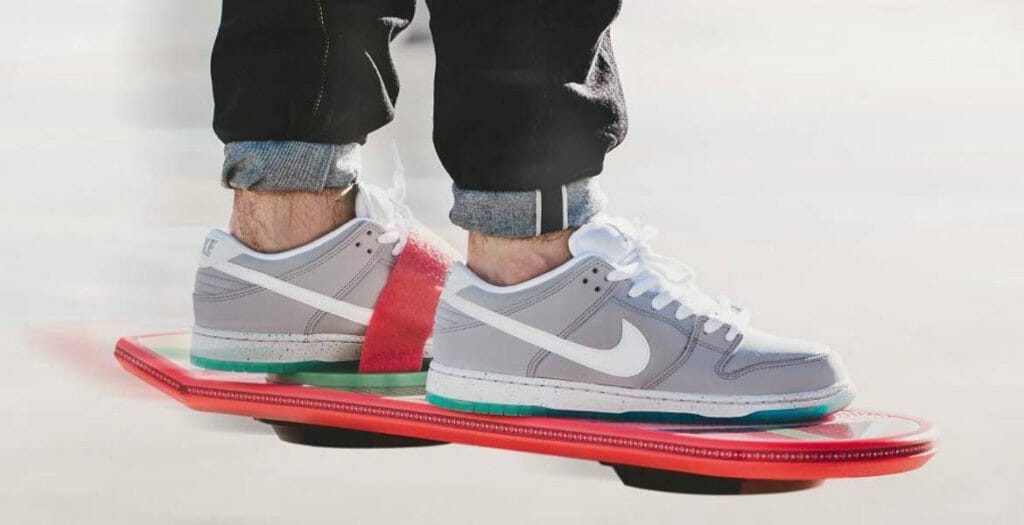 Nike has just created hoverboards, joke. But, they have released the next best thing, we take a look at the Nike SB Dunk Low Premium Marty Mcfly inspired by the cult classic Back to the Future II.

To celebrate the year Back to the Future II takes place Nike are dropping some Marty Mcfly inspired trainers to celebrate. Later this month Nike and Tinker Hatfield will be debuting the Nike Mags with functioning power laces (can you hurry up and create hoverboards too), but until then these new edition Dunks will tie you over. Inspired by the shoes that Marty wore in the film Nike brings back the famous grey, white and teal colourway to the SB Dunk – though I doubt anyone will be skating with these kicks.

With a cool grey upper these kicks have contrasting white accents throughout, even down to the famous swoosh. Light retro accent hit the midsole in a speckled effect, where are the colour sits translucent and bold on the outsole. The custom insoles that were designed specifically for this drop are reminiscent of Marty McFly’s hoverboard.

Four decades after the inception of the slam-dunk, Nike was just over 10 years old and basketball’s popularity was surging.  The year was 1985. It will go down as one of the most pivotal years for Nike Basketball as it marks the year the Nike Dunk was born.

Conceived from the hustle of a young design team, the Nike Dunk basketball shoe was driven by performance innovation that naturally translated to street style. The design solidified Nike’s focus on basketball and reinforced its obsession with creating products to make athletes better.