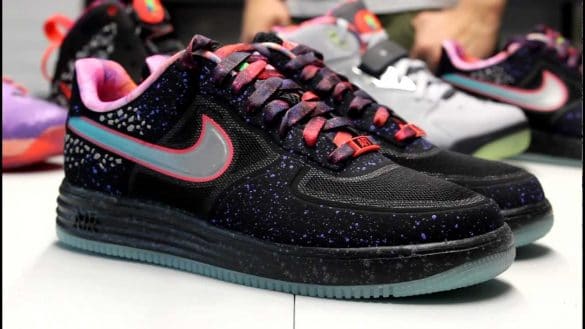 We’re still not sure about Lunar Forces. They make us do the Marge Simpson murmur because it reminds us that we’re stuck in one big referential loop where technology is just a tweak of someone else’s masterpiece. On the positive side, they’re bloody comfy compared to the moonboot, Timbo-like feel of the sneaker world stomp of the original AF1 (have you tried to wear some of the early 2000s lately? Not the greatest fit). It has undeniably been a pretty good year for this model — white on whites are back in a big way, the collaborations have made noise and a shoe we thought might end up being the domain of dads in big jeans and XXL Rocawear garms has stamped its dominance with a younger fan. Even the once-derided mid is having its moment too. These Jacquard LF1 Quickstrikes have a woven fabric upper with some Christmas sweater type patterning on it and they’re decent. Nothing mind blowing, but an approach to the shoe we can’t recall seeing before (but then again, we have seen a LOT of Forces in our time) and two colourways that will be online this weekend. And nope, we don’t know why one has a speckled sole and the other doesn’t.