Nike LeBron X Trainers – All You Need to Know

The Nike LeBron X is one of the most technologically advanced trainers of recent years. Partner this with the publicity that comes with celebrity athlete endorsement and it’s no wonder it’s been so successful. Read on for all you need know about the Nike LeBron X.

You don’t need to look too far back in history to realise that celebrity sneaker collaborations aren’t always as well received as expected *cough* Steph Curry x Under Armour *cough*. With the abundance of successful collabs and guest designers capsules released year in, year out, it’s easy to assume that they all get the same attention – this isn’t the case.

Fortunately for LeBron James, it’s been a ultra lucrative partnership which has seen several styles released – all of which have done incredibly well. One of the best of the bunch, the Nike LeBron X, was released to critical acclaim and has been given several colourway updates since. Read on for all you need to know about, LeBrons and the Nike LeBron X.

Although nobody will ever reach the monumental level of success the Nike and Michael Jordan collaboration has seen, LeBron is informally known as the only one who will ever come close. After coming out of a bidding war between Nike, Reebok and Adidas, the basketball superstar eventually decided to sign with Nike at the young age of 18 (in a contract reportedly worth $90million) and has released countless styles of LeBron basketball shoes and other LeBron sneakers with the sportswear giant since.

After winning his first NBA championship in 2011, LeBron James and Nike released the Nike LeBron X to critical and commercial success. With key features including zoom air, flywire security, superior ankle support it’s incredibly well constructed for those looking to use them during sporting activities making them a favourite among athletes and sneakerheads alike.

Undeniably as a result of the LeBron X, he topped the list of highest selling sneaker collaborations among his fellow NBA players in 2013.

When playing for his school basketball team at St. Vincent-St. Mary High School, LeBron was accumulating a lot of attention from the local, and eventually, national press due to his superior sporting skills and capability on the court. On graduating, a bidding war between major sportswear brands began, with Nike eventually sigining the star for a reported $90million.

Since then, he’s won several championship and countless awards and accolades. The continued success both on the court, and commercially with Nike LeBron’s led to them securing a record breaking lifetime contract deal worth over $1billion. 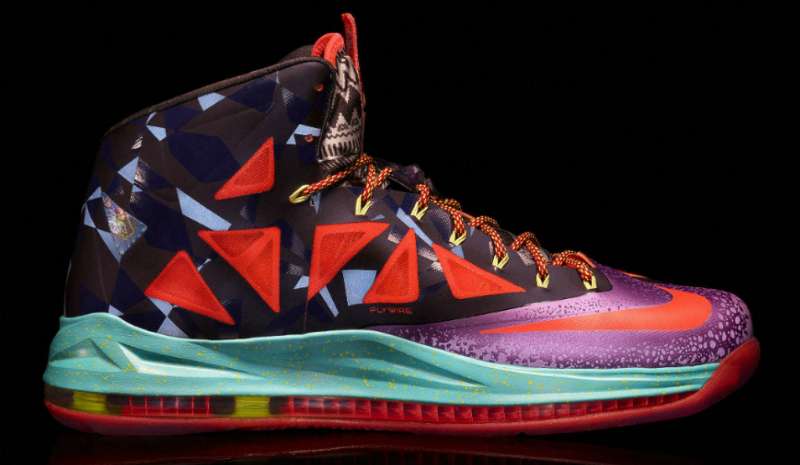 Where to buy a pair of Nike LeBron X Trainers