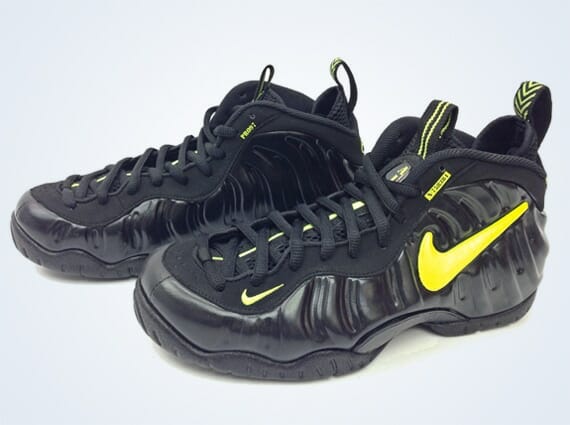 The Foamposite used to be awesome. For everyone who liked the shoe that Bibby and Penny made famous, far more hated it. In the UK, where basketball is a marginal sport at pro level, only players and connoisseurs of weird Nike cared. Even the reissues gathered dust. Back when the Harlem House of Hoops had a snaking trail of overnighters queuing to cop Coppers, downstairs in the Bond Street Foot Locker, it was tumbleweeds. Then the hype went global. Some people got to pretend that they liked them all along and didn’t joke about the perennial pair of Foams in Slammin’Kicks over the years, some people realised that there was a pound or two in selling pairs to overseas fiends and some just got carried along on the excitement of it all. The Galaxy drop in 2012 was pivotal in engineering this. It gave Nike the freedom to get really silly with an already madcap design, and it helped import a new strain of Americanised release mayhem when people brought tents to NikeTown and excitedly created a shanty town of sorts by Oxford Street. Seeing the cash in the Foamposite franchise, Nike set about dropping more variations that played on that weirdness, but got it wrong by colliding franchises — elephant print and Safari would probably have been a moment in hype if they’d dropped a decade prior, but they just came off needy. Weatherman editions looked like they were from Larry David’s freak books. There’s good ugly and there’s bad ugly. It was like putting fancy rims and an airbrush picture of a dragon on a concept car. Unnecessary. We loved the Paranormans, but that was the last time we cared about a Foam. Which brings us to this model.

We don’t think many of the current Foam hoarders cared about the ‘Dr Doom’ Foamposite Pro when it dropped eight years ago — it was one of the best editions of this shoe ever. Which leads us to the mystery of this shoe — why was the Foamposite Pro released in 1997? It’s ultra similar to the Foamposite One, and despite slightly more exposed carbon and an alleged (we can’t sense it) weight loss, bar the addition of a swoosh on the side, there’s not a great deal of difference. With the ‘posite process costing so much we’ve always assumed that Nike wanted to recoup on it and maybe got a little nervous about the low-key branding on the original version, particularly in front of TV cameras. But it takes more than a marking on the side to make this model seem remotely conventional. Yet, in the last few years the Foamposite seemed to become a bit predictable in its attempts to surprise – it was the drunk uncle at the wedding or wake. Unconventional became a new convention. But then we saw this Volt version. Volt has been key to the Nike armoury since Lunarlon debuted, but the lurid shock of fluorescence became the flooded colour on nearly every 2012 Olympics shoe. It’s a staggeringly obvious idea, but by bathing a strange shoe in that neon, this model takes on an obnoxious quality that’s kind of appealing. We don’t know how you pull it off, but as an object there’s something about it that makes it the illogical conclusion to the shoe’s current streak. After all, these shoes helped bring chrome and oil slick pearlescent looks to our feet. Volt was an inevitability and these are online shortly.

Where to buy a pair of Nike Air Foamposite Pro Voltage