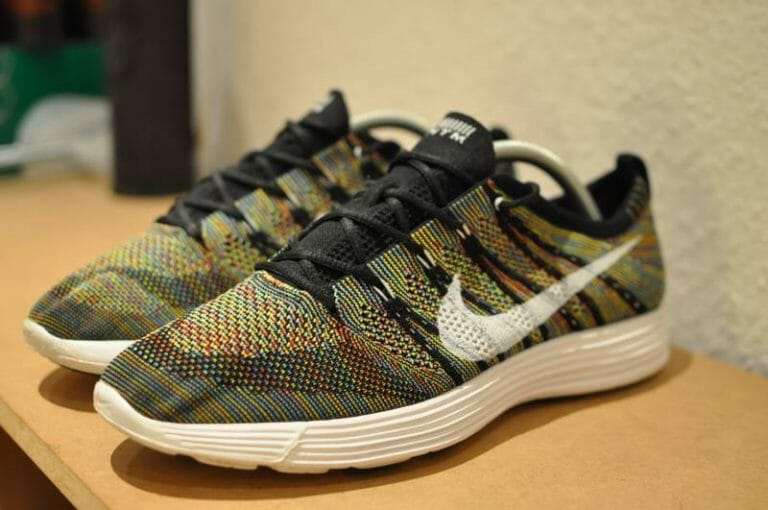 Nike’s Hiroshi, Tinker and Mark helmed HTM think tank stopped with retro shoes a while back. The HTM2 collection from 2010 with the Nike Run Boot hinted at things heading in a different direction, but let’s be honest here — we weren’t ready for what they brought with Nike Flyknit. Performance hype? That was something knew. The downside with the HTM Racers and Lunar releases is that they weren’t the usual limited editions of 10,000+ – they were genuinely in the hundreds, so they were out the reach of those who didn’t have access to a store in the area, a working alarm clock or an inclination to camp for knitted footwear. That said, for those who grabbed the HTM Flyknit story so far without eBay in your eyes, there’s a fair chance the tactile design actually ended up on your feet, which is more than can be said for some impulse excitement over expensive shoes. Rainbow colours on an HTM shoe are over a decade old goes back over a decade and to coincide with Milan Design Week, Nike are ready to cause some mayhem with the release of these shoes. There’s a Nike Flyknit Racer with a phenomenal colour palette on the upper (that we don’t think is HTM) and there’s an Inneva Woven (not pictured, because we were supplied pictures of the original TZ Inneva by mistake) with a black upper and rainbow splattered sole, while the HTM Flyknit Trainer+ with the Dynamic Flywire lines marked brings back memories of last summer’s HTM drop in the colour stakes. These shoes are dropping in very low numbers (we’re hearing rumors of the numbers being in the fifties) in Milan at Nike Stadium Milano on Friday and London’s 1948 store on Saturday. Good luck getting a pair

Where to buy a pair of Nike Flyknit