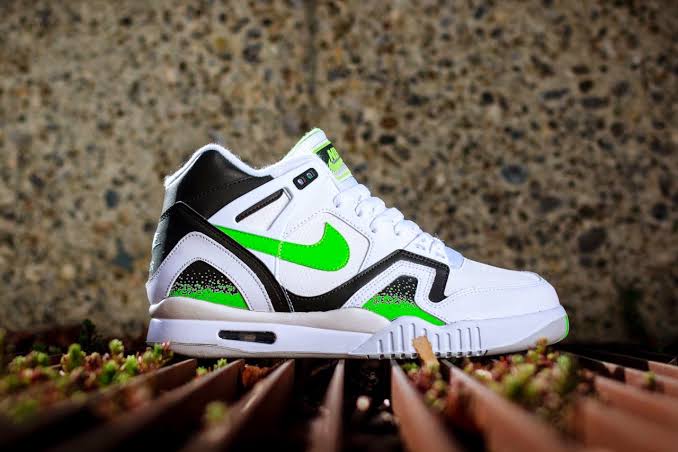 Nike haven’t put a foot wrong with the Nike Air Tech Challenge II reissues. Usually by this point there’s at least a handful of duds, but there seems to be a real reverence for the shoe, regardless of whether the shoe is TZ or inline. Some colourways are better than others though. This makeup goes full Bell Biv Devoe with the Poison Green colours and they’re some of the best versions we’ve seen this year because they look like they could have done the running man straight out of 1990 with a pair of stonewash jeans and specially commissioned Starter Gear. We wish this variation would come accompanied with a matching tennis shirt in a matching green. No Agassi shoe should be muted (well, not until later in his career when things seemed to get more sober and serious) and the fluorescent accent colour pops in the flesh. Nike’s finest offering for the summer of tennis shoes isn’t boring us yet, despite its year-long drip feed to celebrate the hairpiece and pirate earring don’s return to the Swoosh. This is definitely one of Tinker’s greatest moments and as shorts weather approaches, we can’t wait to give the collections we’ve been amassing the outings they deserve. Three-quarter greatness that could easily pass as a shelved sample from the vaults — we’re into them now and we’d be tripping over them 24 years ago too. For those who got aced by the speed those Wimbledon IIs and French Opens sold, these could prove to be a worthy contender.