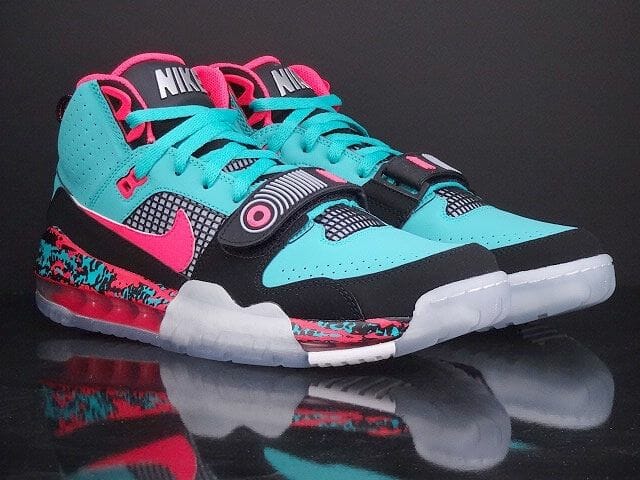 Wow. These were not made for us Nike Air Trainer puritans. We hold the Bo Jackson endorsed line in the same light that we genuflect at the alter of MJ, regardless of the build quality. We’ve excitedly watched the SC and SC II reissues come back with good leather and a certain respect for Bo’s legacy at Quickstrike level, but we knew that someone was going to mess with the formula on a grand scale. We loved the Broken Bats SCs too. We won’t lie — we kind of liked those Medicine Ball Air Trainer 360 things that were meant to arrive in the CT store but never seemed to get a release. For years we referred to a slew of Air Trainers as Bo Jacksons (Noreaga did the same too), but he never had a specific signature shoe until now: here it is — the Nike Sportswear Air Max Bo Jax.

We liked the 1/2 Cent a lot for the adept way it brought some Penny classics together and we messed with the Zoom Rookie too, but we’re too over the hill for collisions of Charles Barkley classics. Now that cut and shut approach to design has focused on Tinker Hatfield’s strength and conditioning classics for multiple activities. We won’t lie— the first shoe to bear Bo’s name should have been a classic and this ain’t it. You can see plenty of shoes in the Jax: there’s 1990 Air Trainer SC in the silhouette, SC II in the combination of height and forefoot Velcro, the 1989 totally washable TW design’s ski-boot style insert and net-like panels, there’s some OG SC (aka. Air Trainer III) in there too and those lace loops seem to come from the 1991 TW. It could have been subtle, but the patterning, South Beach colourway and full-length Visible Air (interrupted by the iconic lateral stability detail) makes it yell kind of incomprehensibly. We wish these were totally washable, so we could get rid of that colourway and see ’em in their purer form to cast a real judgement on them, but it’s all a little too messy to us. We’re sure that a generation who never marvelled at the dawn of this Nike category and the colours and shapes it birthed don’t have that emotional baggage, but we prefer the Raider editions (if we have to call a favourite) — where’s that 1991 TW reissue? We’d sooner see that. Given the wild excesses of our Pump Fury, we’re aware that there’s a pot/kettle insult situation at work, but that shoe always looked insane anyway. Still, we won’t deny that Air Max Bo Jax is a cool name — we just wish that it was attached to a better shoe. For those who are interested, these drop soon…

Where to buy a pair of Nike Air Max Bo Jax