Nike Air Max 97: All You Need to Know 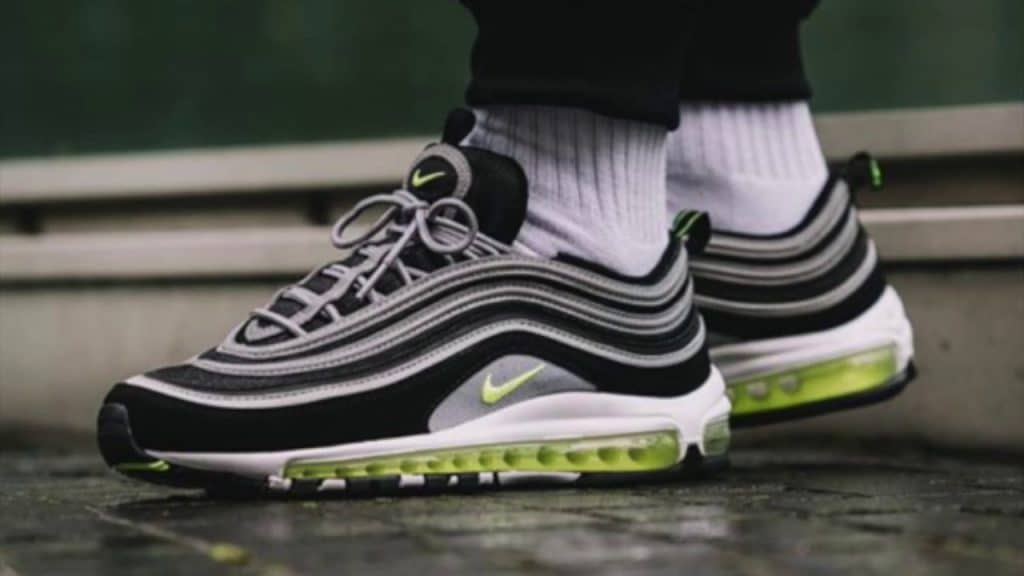 Often dubbed as one of the most iconic of Nike’s archive trainers, the Air Max 97′ is well and truly a member of the sneaker hall of fame. Read on to discover all you need to know about this beloved sneaker release.

A trainer that, without a shadow of a doubt, has been designed for the more active wearers among us; the Nike Air Max 97 featured the same air bubble cushioning as previous models, but instead – extended along the whole length of the sole.

Inspired by the sleek bullet trains of Tokyo, the Air Max 97’s originally came in a streamlined metallic silver colourway. Since then, several spin-offs and limited editions have been released over the years. For the most part, however, the Air Max 97 has been left in the archives to rest with some of the other sneaker greats of the decade. But they’re back with a vengeance, so we thought we’d give you a run down of everything you need to know about the iconic trainer.

Having been released in the late 90s, to this day the Nike Air Max 97 is still one of the most coveted sneakers out there. For the first time, the sneaker featured a full length air bubble that extended the length of the sole. While preserving certain a similar aesthetic from the Air Max 95’s, the 97’s were modernised with a streamlined, metallic sheen and the 3m stripe around the upper.

After the initial release many different colourways were introduced including, for Nike’s first time, a gold option. Despite it’s iconic status, the original Air Max 97 was only around for a year, as it was quickly superseded by the Air Max 98. But several iterations later, the Nike Air Max 97 is still considered one of the most desirable out there – mainly due to it’s incredibly rare nature. It looks pretty darn’ good too!

Late 90s futurism played a huge part in the original design of the Air Max 97 – the original metallic silver colourway is completely reflective of the era, with so many products of the decade very aesthetically alike. With the new millennium looming, it’s no surprise that designers were looking to the future, especially with the Y2K bug and potential electronic meltdown playing a big part in the collective consciousness. It’s really no wonder that the Air Max 97s were designed reminiscent of a big of tech gear.

The 90s preemption of what the future might look like may seem a bit dated and just a bit ‘predictably space-age’ today, but that’s exactly what makes the Air Max 97 so endearing as a trainer. With the trend for all things vintage and 90s still reigning supreme in streetwear, it’s not surprising that both the original silver and later gold Air Max 97 is having a moment in the spotlight again.

Like most models of Air Max, there has been uncountable variations and colourways of the 97 – some undoubtedly better than others. Looking through the history books following Nike Air Max’s 20th anniversary, there’s been somewhat questionable versions of the trainers – namely the Air Force 1/Air Max 97 hybrid which is probably best left forgotten. But here are some variations of the Air Max 97 that you should definitely take note of:

As far as collaborations go, the Air Max 97 wasn’t often used beyond regional limited makeups. Most brands were more interested in collaborating with better known, more commercial models, and Nike never seemed to push the 97. The first real collaboration came as late as 2004, when San Fransisco streetwear store True bought the Air Max 97 back down to earth, swapping the metallic stuff for neutral tones and speckled detailing.

After that, a couple more noteworthy collaborations did pop up, including ones with Sony PlayStation, Shady Records, and even a tribute to Japan’s Kashima Antlers soccer team (complete with Air Jordan III style elephant print).

In 2011, Nike Air Max 97 Hyperfuse was released as a part of the companies continued revival of archive styles. Swapping the usual leathers and suedes for a three-layer super-lightweight material, Nike bought a new lease of life to the Air Max 97.

This was met with strong praise from the sneaker world, with this innovation in design not dissimilar to the original modernism shown way back in 1997, as opposed to the simple colour switch-ups that had come before. While it’s not quite the same as the originals, considering how difficult it is to find Air Max 97s – they make a pretty good second option!

Nike released an updated version of the Air Max 97 in 2010, the Uptempo. With a new air unit, the Air Max 97 Uptempo housed the most cushioning ever for a Nike basketball shoe at the time. It was one of the biggest and boldest designs yet, while pushing innovation to the forefront. The now retro-style basket ball trainer has also had a bit of a comeback of late, with brand new colourways launched this year fitting in nicely with the current trend for all things nineties.

With such an iconic nineties model of trainer, it would be rude not to completely embrace the decade throughout your whole look. Go for a wide leg trouser, turned up slightly to show off those coveted kicks – but if you’re after a more contemporary look, try a slim leg jean for a streamlined look that will work well with the sleek aesthetic of the Air Max 97. Pair with a long sleeve graphic T-shirt to channel nineties streetwear, or throw on a plain crew neck jumper – the key is to keep the rest of your outfit simple, and let your 97s do all the talking.

Where to buy a pair of Nike Air Max 97