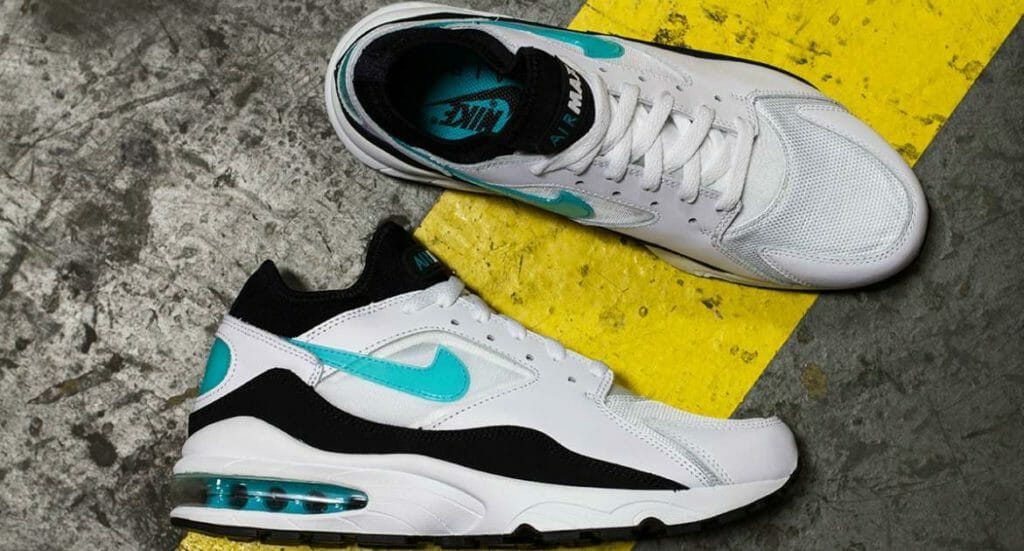 Are you ready for some nostalgia? Nike are dropping a classic, the Air Max 93 OG pack in “Menthol” and “Citrus”. Here we have an in-depth look at the Menthol colourway

If you’re a fan of the Air Max 93 then you are going to love the new OG pack. Going back to the 93’s roots, Nike are re-releasing the Tinker Hatfield classic colourways in “Menthol” and “Citrus”. Even though both colourways are hot, we are having an in-depth look at the Menthol. The icy accents and contrasting black make these the perfect white trainers for someone who likes a pop of colour, and even though these are a summer drop, just picture that icy blue swoosh come winter… it’s a classic.

Keeping true to the 93 features and colourway the Menthol drop is the 2014 retro update of the popular shoe. Though not all Air Max fans rate the 93 silhouette highly, these are Tinker Hatfield’s favourite – we trust in the trainer OG’s taste.

The Air Max 93 was the first of its kind to have 270 degrees of pure visible air, the original design also has a sockliner with no real tongue. Having more air than it’s predecessors meant extra heal comfort making it a smooth and easier running shoe. Tinker Hatfield also introduced the coloured air bubble with this model – all the designs before had the typical white air bubble.

The Air Max 93 was the first to feature a blow moulded cushioned sole with all around visible Air Unit, dubbed the ‘bubble’. You can tell why it’s Tinker’s favourite of the Air Max range, he spent his time up until and including the 93’s designing them, making them the longest developed pair of trainers under his mighty reign at Nike.