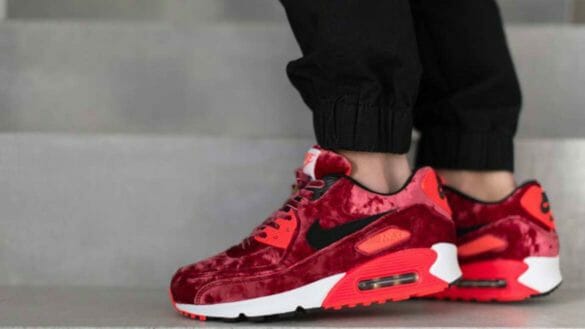 Nike have got a special treat for us, it’s the 25th anniversary of the Air Max 90’s, and they have released six never before seen editions of the iconic silhouette. We take an in-depth look at the 4th in the pack, the Nike Air Max 90 Red Velvet.

As you might already know Nike are celebrating the 25th anniversary of the iconic Air Max 90’s. For the anniversary Nike have pulled out all the stops and are dropping some of the most unusual renditions of the 90’s yet. For the sneakers silver anniversary Nike have dropped six rather eccentric colourways: Cork, Paisley, Snakeskin, Velvet, Crock-skin and one I can’t actually describe… let’s just say colourful. It would be safe to say that all the Air Max collectors out there will be clamming to get a pair of these, so if you’re an Air Max fan then I would suggest having this in your wishlist ready for the drop date.

To mark the anniversary of one of their most iconic silhouettes, Nike presents the Air Max 90 ’25th Anniversary’ Pack. The second of the four in the pack is another unique take on the Max 90 ‘Infrared’. Staying true to form, the shoe features all of the Infrared’s accents amongst an upper made entirely of velvet. Sitting atop a clean white midsole, the shoe features a visible air unit to the heel and is finished with a set of tonal velvet laces.

The Air Cushioning Technology was first introduced in 1979. The use of the Air Cushioning in the midsole was to change the performance in the running shoe making them lightweight and flexible. During the 8 year period of development, the Nike Air component became larger, and a key feature in many of their shoes – increasing the comfort and flexibility of the trainers. The Air Max 90’s came about in the 90’s, duh. However, it moved away from it’s athletic roots and became a fashion sneaker favourite.