Nike Air Jordan 7 French Blue – All You Need To Know 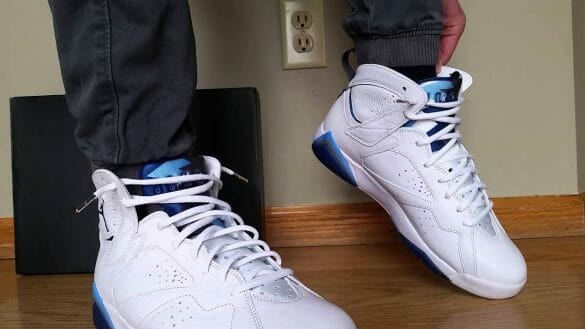 Jordan fans you are in for a treat, Nike is bringing back some of our favourite Jordans of all time. Just announced dropping this week are the Nike Air Jordan 7 French Blue.

As part of their remastered series, the Jordan brand is bringing back some of the best old school retroes. This particular model was first released in 2002 and are now back for a 2015 makeover. However, the price tag has definitely taken a hike up from the $125 to $190, this is due to the premium leather update that is heavily tumbled. They might be expensive but they are worth the cop, we take a detailed look at the pair before the drop date.

The beloved “French Blue” Air Jordan 7 Retro returns newly remastered. The premium white tumbled leather upper is accented with French Blue, Flint Grey, and University Blue. The pair features Jordan branding on the heel, tounge, and tab, as well as the Jumpman on the side. The new leather treatment makes these especially premium and are great for those of us that love a pair of fresh white Jordans.

Tinker Hatfield designed the Air Jordan 7 with change in mind. These were the first Jordans to featured the Huarache technology that allowed the shoe to conform to the user’s feet. These Jordans also didn’t have much visible Nike Air branding as it only featured on the inner sole.

When Micheal Jordan played in the Olympics in 1992 for USA men’s basketball team, Nike released a special Olympic colour collaboration to celebrate the Jumpman. These had Jordan Olympic jersey number “9” on them, instead of the well known “23”.