Nike Air Huarache – All You Need To Know

One of Nike’s biggest re-release success stories of recent years. We give you a guide to everything you need to know about the Nike Air Huaraches.

There are few trainers in recent years that have had as much buzz around them as the Nike Huaraches. If you’re a fan of these iconic 90s sneakers, or you can’t stand the sight of them, keep reading to learn a little more about the Nike Air Huaraches. 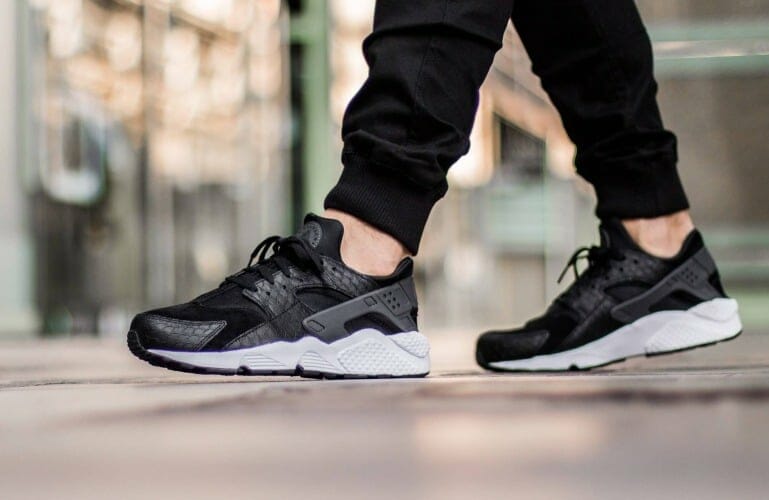 The Huarache is another silhouette that we have to thank the famous Tinker Hatfield for. Once again, in typical Hatfield style he designed this trainer outside of his brief, from his own idea. He claims he got inspiration water-skiing gear – certainly interesting. Nike didn’t like the idea at first, something Tinker must of been used to at this point. It nearly didn’t make it to production level, until it was tested with runners at the NYC marathon in 1991, and the athletes couldn’t get enough of it.

Since then the Huarache has been a huge success with worldwide. In 2014 Nike decided to retro the OG Air Huarache, and it proved an enormous success. You could even say a new hype was created, Huaraches became the “must have” sneaker again. The most popular Huarache colourways recently have got to be Triple Black, notably the Nike Huarache Utility version. 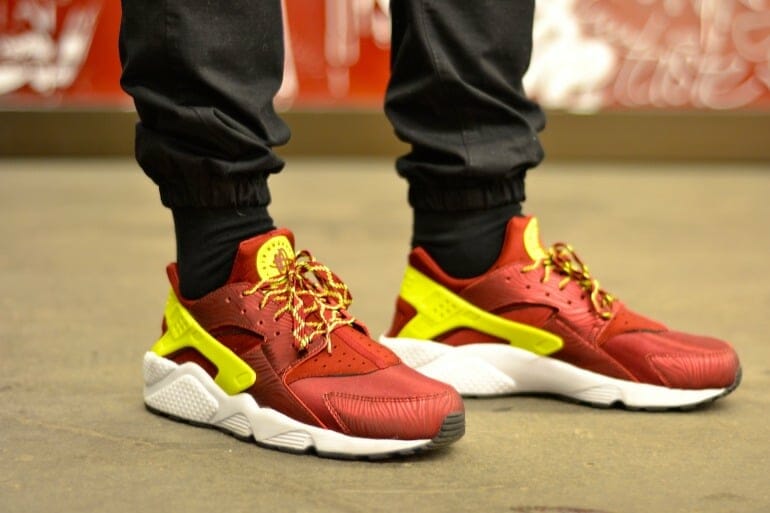 The design of the Huarache was pretty groundbreaking at the time and still is. It was one of the first Nike sneakers not to feature their trademark Swoosh branding. Instead opting for a brand new original Huarache logo on the tongue, and Nike printed on the back of the ankle support. As I mentioned earlier, the material used for the construction of the sneaker was also something entirely new. Neoprene and Lycra, materials you’d associate with cycling or water-sports. The latter of course being correct as Tinker claims he gained his inspiration for water skiing equipment.

However all this new technology was an absolute hit. The original advertising campaign for the Huarache asked us the question “Have you hugged your foot today?“, referring to the sock like upper construction of the shoe. People still argue to this day that the Huarache is the most comfortable Nike trainer to date, which is pretty impressive considering it’s a design that’s over 20 years old. 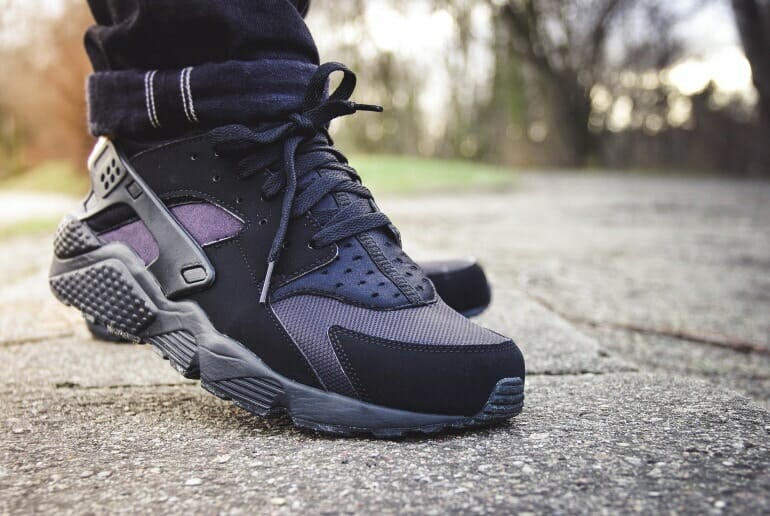 Focusing on being more like a basketball style sneaker, this style was introduced in 1992, a year after the original. Featuring a higher ankle support that’s needed for players, and also cutting off excess weight wherever possible it was a huge success. 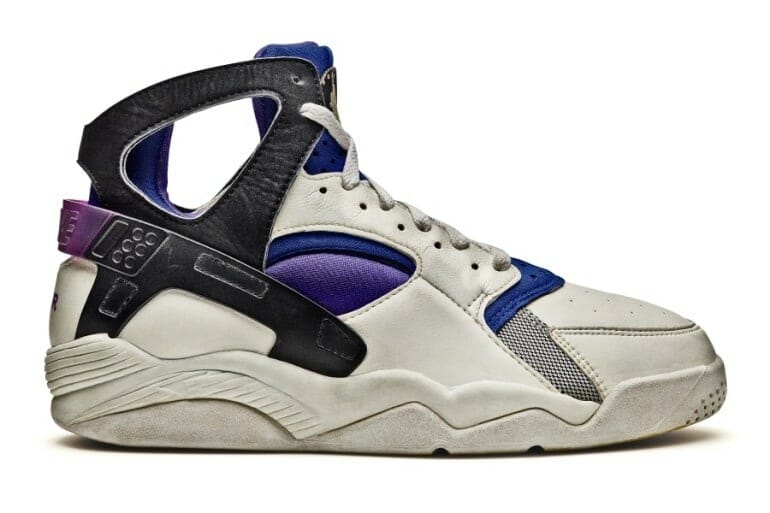 Probably the most obscure of Huarache variations, this edition shared little in common with it’s predecessors. The only similarities were the use of neoprene and the same toe-box. The international was definitely more of a running shoe, like the original. 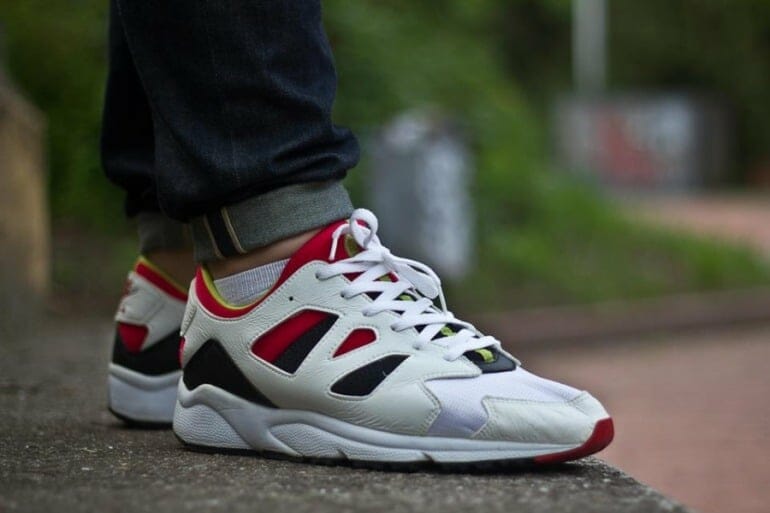 Again, focusing on the basketball court, this model was aimed at NBA stars, to use as their training shoe. The sneaker was high top again like the Air Flight Huarache and provided even more ankle support. The most exciting new feature here has to be the lock-down strap that kept everything where it should be. This variation proved a huge hit and has been re-issued countless times. 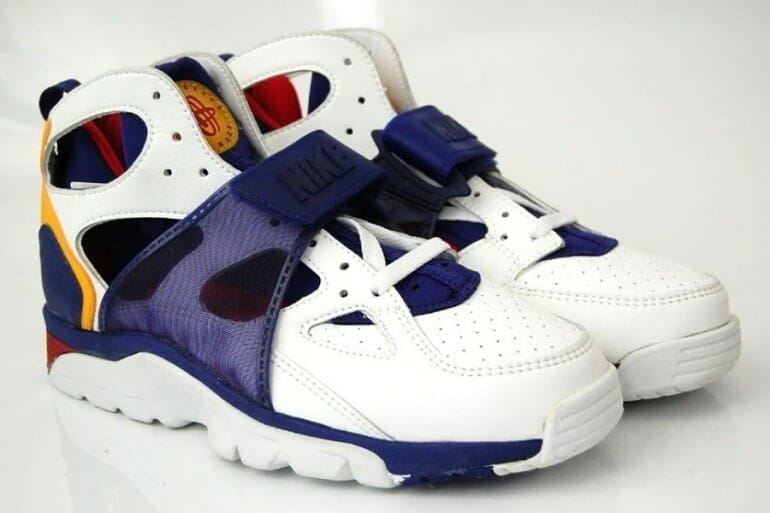 Probably the most iconic of Huarache designs bar the original, the Huarache Light was launched in 1993. A favourite for collaborators, and also amongst hardcore sneakerheads the Light has seen numerous releases over the years. Notable releases have to be the ACG inspired Mowabb colourway and the Footpatrol collaboration. 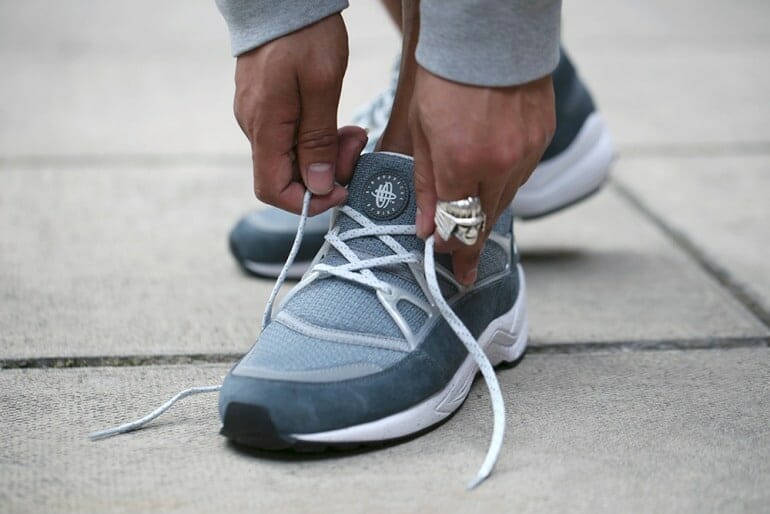 The Huarache has had a few great collabs over the years. The most interesting of these has to be when Nike teamed up with Streetwear OG’s Stussy in 2000. Being in the game since the start, Stussy are a big deal to collaborate with. They kept it very understated and classic, the shoe had very little branding to keep in line with the Huarache image. 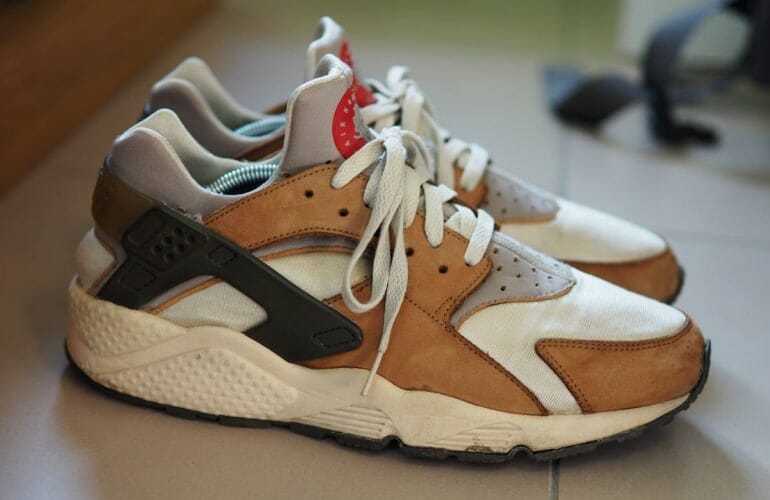 The only other notable Huarache collaboration that’s taken place is when London trainer boutique Footpatrol had the chance to create their very own Huarache Light. Keeping it very low-key and going for a grey city vibe, reminiscent of the streets of London, only 500 pairs were ever made.

Huaraches are a great summer shoe due to their lightweight construction and bold colourways. They’d match amazingly with a great pair of sweat or chino shorts and a bright t-shirt or button-up. With plenty of options available on our online store why not give the Huarache look a try this summer? It’s easy to pull off and perfect for a few pints in the pub garden.

Nike Air Huarache – All You Need To Know

Where to buy a pair of Nike Air Huarache