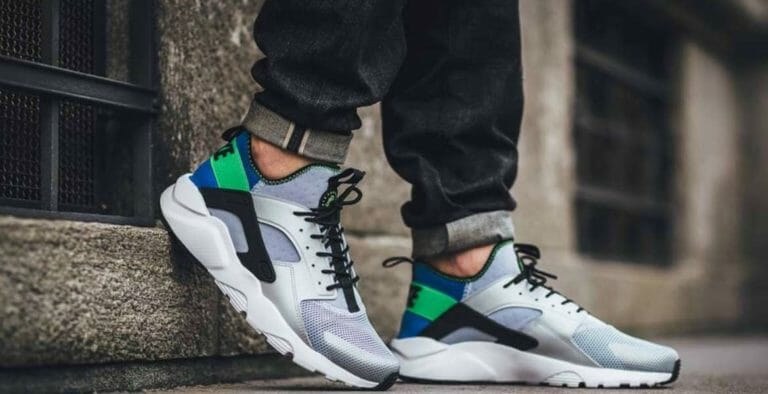 The Huarache is arguably the stand out trainers of this season. So when Nike announced they were bringing back an OG colourway, sneakerheads around the world freaked out. We take a look at the Nike Air Huarache Scream Green Trainers before the drop date.

The Scream Green Huarache 2014 is a retro’d OG colourway of the original pre-2000 classic. We have seen the Nike Huarache make waves this season and it is definitely a stand out shoe of the year. From exclusive drops to remakes, this vintage running shoe has definitely solidified its spot on the trainer market as being one of Nike iconic silhouettes.

To follow on from the 90’s remakes Huaraches are coming back to an OG colourway that only true Air Max fans will recognise. This retro runner features a white mesh toe box with matching leather overlay. The famous neoprene booties features bright hints of blue and green with a contrasting black and white logo on the tongue. The plastic heel cages features tonal colour blocking sitting on top of a brilliant white midsole.

Originally designed in 1991 by the legendary Tinker Hatfield, the Air Huarache combined a supportive outer framework with a sock-like fit and despite its quick popularity it was very nearly axed at the design stage, due to the lack of Nike Swoosh branding. The ‘Huarache’ fit was the combination of stretch grip neoprene and Spandex that provided a foot-hugging fit. The inspiration behind this came from the old Native American sandal called Huarache and combined with its innovative design and minimal upper , it provides a sock like comfort and undeniable style

Where to buy a pair of Nike Air Huarache Scream Green