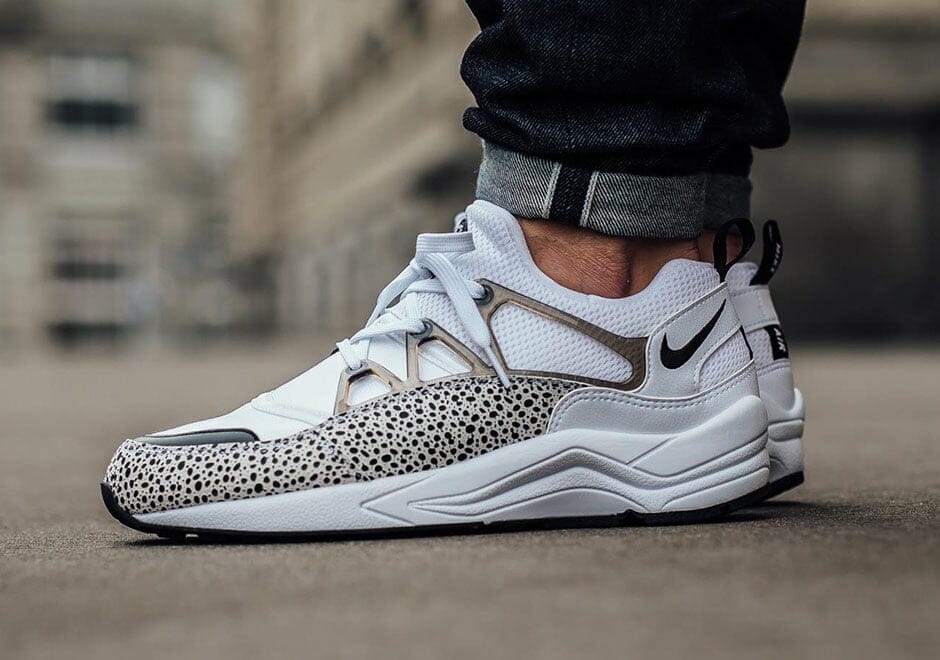 The Huarache Light is a perfect shoe to us in terms of design, even if the fit is ultra smedium. If you work in this industry, you’ll have heard the constant discussion regarding what the next “big thing” is amid much murmuring about “technical running” — that had everyone thinking that the Light would supersede the OG Huarache in hearts and minds. That never happened. 20 years ago it never hit as hard as the OG Huarache did either. History just repeated itself — this was destined to cult status and was never gonna be a bestseller. In fact, in 2014, a lot of kids would be forgiven for thinking that these knocked off the Blaze of Glory, rather than the other way around. But enough of the negatives — when the samples for these arrived they were pretty polarising in the office. That Safari print was metallic silver. This production pair of the black/dark concords is a lot, lot better, reminding us of some Huarache Light samples we saw a few years back that used a similar makeup (minus the patterning). Blacked out Safari emboss isn’t overkill and unites two once slept-on shoes that used to have the connoisseurs going nuts, and they remind us of the Safari version of the Nike Huarache Light Burst — a wet weather sale rack beater from a decade ago. Expect a burgundy accented pair to accompany these, plus some nickname of some kind for the pack. We’re just gonna call them a good, stealthy looking accompaniment to some already solid colourways. These will be online next week and they do this design justice.

Where to buy a pair of Nike Air Huarache Light ‘SAFARI’