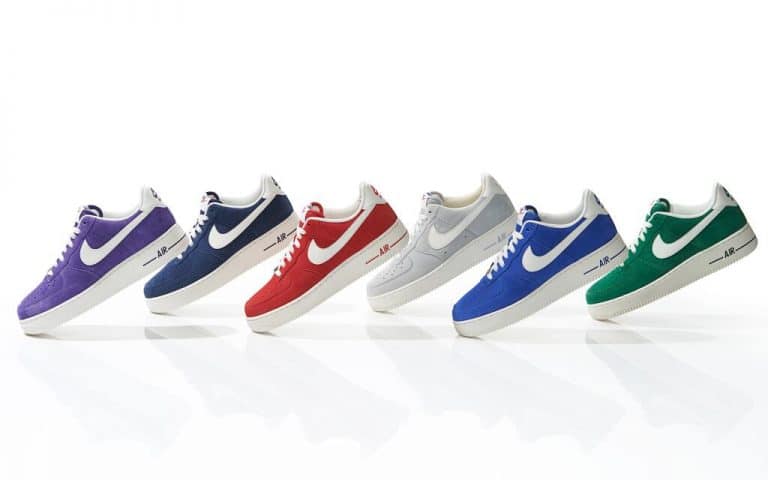 You would think there’s nothing else that can be done to the Nike Air Force 1 to separate it from the thousands of previous makeups. However, what most people think they know about the Uptown is generally only surface level — the 1thology was good, but there were still hundreds of omissions that we’ve spotted on our travels. What we have loved over the last few years have been nice little tweaks to existing formulas, but we were surprised by how smitten we were by these shoes when they turned up. The notion of a Nike Air Force 1 VNTG with some kind of pre-yellowed sole would be enough to make us run amok, setting fire to cars and breaking shop windows, but these new makeups cover some history in a smarter way, by bringing some of our favourite Blazer colourways to the Force. And somehow, it works amazingly well. Suede on this model is nothing new (chocolate suede on the AF1 makes us do the Homer Simpson drool) and primary colours? The legendary canary yellow and safety orange editions make these look subdued by comparison. But when you twin the colours with a white leather swoosh, we’re sold.

It’s like George Gervin meets Moses Malone – exposed foam on an AM1 — as was the case with some recent Blazer tongued editions — is just strange, but the Blazer is the AF1’s granddaddy, so there was always going to be some DNA in there. So amplifying that lineage makes sense. We usually like our midsoles left all white, but highlighting the —AIR— works perfectly here. As an entry level for anyone that wants a decent pair of this fabled shoe but was left underwhelmed by the bland nature of the shoe’s executions in recent year, this is as good a pickup as any, and some connoisseurs might want to make cupboard space for them too. This is actually three of a five-pack, but it looks like we’re only getting these colourways, with University Red set to drop in the next few days and the Varsity Purple and Pine Green for May. Hopefully the two blues will make their way over here too. Those Pine Greens look like the kind of shoe that used to make fanboys babble incoherently during New York trips and these are further proof that the Air Force 1 is here to stay long after the hype dies down elsewhere.