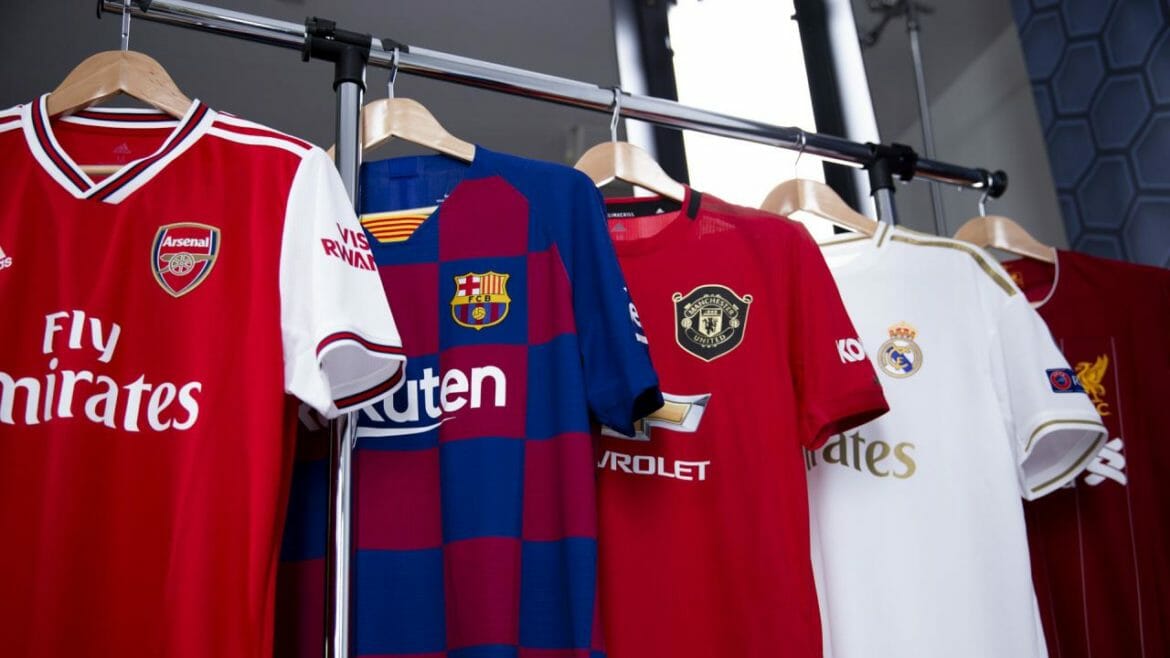 While football shirts are designed primarily for differentiation between teams on the pitch, sometimes the teams get theirs so right that they are worth mentioning.

Once in a while, amongst all the trash that a lot of teams come out wearing, there is a full spread that actually makes us think ‘wow, that’s pretty cool’. So here we’ve come up with the 20 we think to deserve to be on this list, from the England 1966 home kit to the Man United 1996 spread.

We couldn’t include this. It is undoubtedly the most iconic football shirt for many people in this country, as it was the one that Sir Bobby Moore sported as he held the World Cup trophy up high for all to see. Pure red with the Three Lions emblem on the chest, this was a fuss-free design that showed England meant business on the pitch.

This stands as one of the coolest football shirts to come out of English football. Its retro vibe was one of the most simple England shirts to ever have been created and has even seen Umbro recreate it in 2o17 as part of its fashion line. Is there anything more English than seeing Paul Gascoine in this spread? We think not.

Perhaps Real Madrid’s most iconic shirt to date, worn by the likes of Raul Gonzalez. The design stuck to the team’s all legendary all-white that it had donned since the 1950s. It was in this shirt that Zinedine Zidane scored that volley in the Champions League final.

This was the 100 year anniversary of Barcelona and the shirt reflected this. It was also the year that Rivaldo kicked that iconic overhead goal.

Perhaps the most iconic and most recognized shirt in the Premier League’s history, the Manchester united 1994 away kit was the one in which Eric Cantona kicked a fan in the terraces. One of the sport’s most legendary moments, it sent Cantona and the shirt into iconic status.

This is an iconic shirt because it is the one that Manchester United clawed their way back to a win from being 1-0 down. By the end of the match, they were 2-1 up and beat Bayern Munich to win the Champions League.

It was in this shirt, during the 1986 World Cup match between England and Argentina Maradonna’s’ Hand of God’ goal occurred. Maradonna scored a goal in the 51st minute using his hand and it instantly became one of the most iconic goals of all time.

Liverpool beat Everton to win the FA Cup in 1986 and it was in this shirt that it was done. Liverpool won 3-1 and the legendary Ian Rush scored twice.

This was the year that Liverpool came back from a near 3-0 defeat against A.C. Milan in the Champions League. The match, taking place at the Atatürk Stadium in Istanbul, Turkey, ended with Liverpool reeling it back in on penalties.

This was an important year for Chelsea as it was when Gianfranco Zola joined the club. It was a bargaining move, but he dominated the Premier League that paid off. An example of his magical time at Chelsea was when he, on 16th January 2002, scored a remarkable back-heeled goal as Chelsea beat Norwich City in the FA Cup, 4-0.

1988, UEFA European Football Championship final tournament was held in West Germany and saw the Netherlands crowned as champions for the first time. This was the match that Marco Van Basten scored that absolutely ridiculous goal.

This is an iconic football shirt because it is the one that Johan Cruyff invented the distinctive drag-back known as the ‘Cruyff Turn’. This was also the year that Cruyff sparked mystery when he missed the World Cup due to rumors of a kidnap plot.

This was one of brazil’s finest years and saw them completely dominate the World Cup before actually going on to win it. In this shirt, Brazil beat England 2-1 in the quarter-finals, and Ronaldo scored a 40-yard wonder goal in the same match.

This was one of Italy’s strongest sides and managed to knock England out of the World Cup. The team consisted of the likes of Roberto Mancini and Paolo Maldini – a stellar side that has quite literally never been the same since.

This is one of the coolest football kits ever created. Germany has a history of creating epic football shirts but this one is undoubtedly their best. This shirt features the colors of the Bundesflagge darting across the chest and it was in this shirt that the West Germany side went on to win the World Cup, pushing past Argentina.

This was an epic season for Rangers. Walter Smith’s side saw Ally McCoist’s 49 goals propel them to a fifth domestic treble and within sight of the Champions League final. The side wore this incredible shirt and it is now one of the most historic football shirts out there (as well as most stylish).

The Magpies had long instilled the black and white stripes into their kit, but for this season they added the navy star of Newcastle Brown Ale. Newcastle was languishing in the second division, but their star performance saw them move back up to the top flight. Nowadays the star has been replaced by a payday loan company’s logo – not quite the same eh?

Beautifully simple, this is a classic football shirt. The best version of it was the long-sleeved 1978 shirt, which was worn by the likes of goal machine Mario Kempes. To this day, Argentina has one of the best soccer kits of all time due to the fact that they don’t mess about with fancy design.

There you have it, our top 20 football shirts of all time. From surprising entries like Rangers to the 1966 stellar shirt worn by the Three Lions, these are our favorite shirts since day one of the beautiful game. Today, football shirts aren’t just worn on the pitch and they’ve become somewhat of a fashion staple (largely thanks to the rise in terrace fashion and people like Loyle Carner).