101 Mexican American Flag Tattoo Ideas That Will Blow Your Mind! 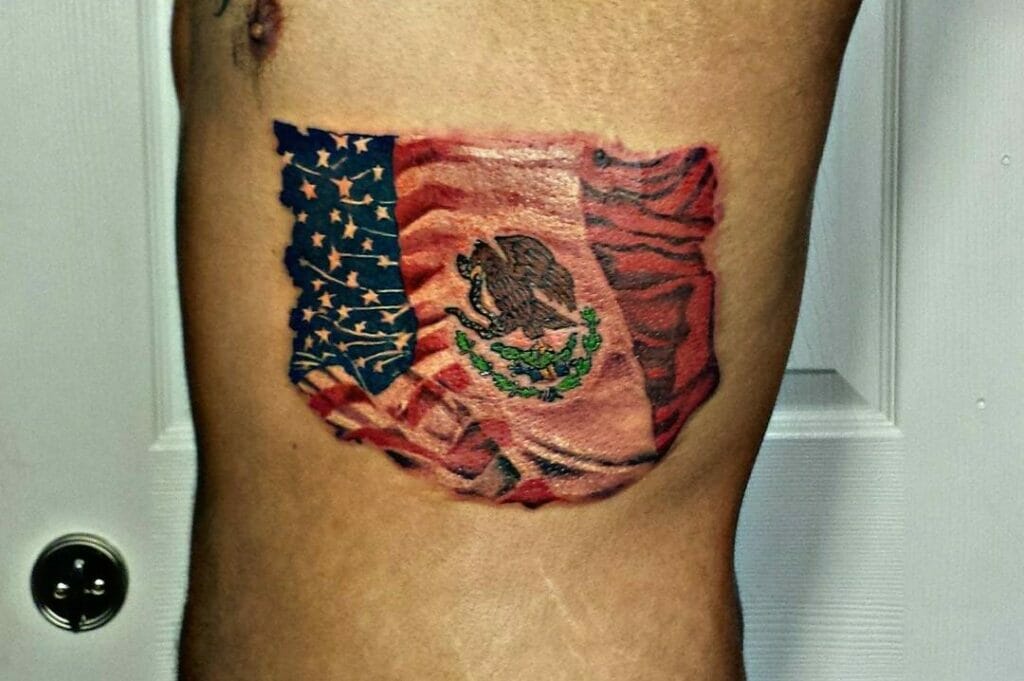 Are you a fan of Mexican American flag tattoo designs? These patriotic tattoo ideas will make you a massive fan. Read below to find out more.

America and Mexico-inspired flag tattoo ideas are definitely not an easy find.

There is a complex relationship between the two nations. However, this tattoo is a symbol of their peace and harmony.

The tattoo can be simple, gothic, rough, or just creative. The tattoos look great on the skin since they are big, bold designs of two stunning flags. Men, women, and all other genders can try them out. It is a great patriotic tattoo that will fill you with pride and gratitude.

Inside the scratch are the two Mexican and American flags, which have been colored beautifully. The logo on the Mexican flag is at the center, along with the three stripes of Mexico. On the other hand, we also have the American flag with red and white stripes along with the stars, which look stunning.

This is an arm tattoo of the Mexican flag and the American flag. The tattoo artist has gone for a bold and elegant theme and has used black ink to achieve it. The shadings, the highlights, the textures, everything is beautifully executed.

It is a large tattoo in which the tattoo artist has divided both the flags into two halves. The upper half of the tattoo is the Mexican flag which has the golden eagle, snake, and cactus. The bottom half of the arm is the American flag with stripes and stars.

The patch on the top has the American flag, while the bottom patch has the Mexican flag. It is a very artistic approach to this theme, and the flags look like they are soaring in the air. The use of colored inks in this tattoo is not too bright and not too dull; rather, it is the perfect hue that matches the patchwork of this tattoo.

This title is one of the most artistic approaches to the traditional patriotic tattoo. Rather than making the two flags the center of attention, in this tattoo, the tattoo artist chose to insert them in a creative manner. It is a portrait of a woman who is wearing two roses as hair accessories. The tattoo artist chose to color the roses as the flag’s colors which makes this tattoo very unique.

The demarcation of the stripes and stars adds a beautiful touch to it. The woman is no ordinary woman either. Her forehead is covered in cobwebs; her eyes are dark with red circular patches around them. Her lips are sealed with stitches, and the tip of her nose is blackened– a very imaginative approach to a patriotic tattoo.

In this half-sleeve arm tattoo, the tattoo artist has blended both the American flag tattoo along with the Mexican flag tattoo into one. The patriotic Mexico tattoo is definitely detailed to perfection. The emblem catches the eye right away. The golden eagle sign, which is resting on a prickly pear cactus, is eating the rattlesnake.

The size of this tattoo is perfect as it can be well spaced out in the arms of the customer. The shadings used in the tattoo look like the flag is actually fluttering in the wind. The texture and the perfect effect of the black ink are commendable.

In this Mexican American flag tattoo, the tattoo artist has merged both the flags into one. The center portion of the tattoo looks like an eye, which is very clever to use since it highlights the emblem of the Mexican flag, which is the eagle holding the snake.

The tattoo artist has used beautiful shading methods in which black and brown inks have been used to highlight the edges and to add more definition. The colors on the flags are bold and classic.

The common factor in this tattoo is the flag stripes. Since it is not colored, it acts as the foundation of both the Mexican flag and the American flag. The rest of the details of the American flag are also present- which are the stars. On the other hand, the artist has done a marvelous job in drawing the emblem of the Mexican flag. The prickly pear cactus and the rattlesnake in the eagle’s mouth have been drawn with utmost detail. Even the facial features of the creatures can be easily seen.

This tattoo has no specific borders, which makes it more free and classy. Rather than having a strict frame, it’s more open and abstract.

In this sleeve tattoo, the main center of attention is the flag itself. The tattoo artist has drawn the flag as if it’s real fabric. Each and every crevice, every fold, every layer, every fold seems like it’s a real flag on the skin. Once again, the combination of the American flag and the Mexican flag is commendable in this tattoo. The top portion of the tattoo highlights the American flag, and as we come down to the bottom of the tattoo, it transitions to a Mexican flag.

The emblem of the Mexican flag has been executed in big, bold ink at the center of the tattoo, which makes it look classy. Just like the flag’s fabrics, the details of the characters in the emblem are also praiseworthy. Overall, the black-themed tattoo looks absolutely endearing.

This tattoo screams creativity at its loudest. No one could’ve thought of taking this kind of approach to a simple flag tattoo. The symbol of the tree speaks of harmony and culture. The meaning behind the tree is to express the message of peace and tranquility between the two nations of Mexico and America. The upper half of the tree is the American flag-inspired design, whereas the bottom half of the tree, which is the roots, is the Mexican flag-inspired design.

The essence of the tree has been maintained throughout this tattoo, and the colors of the flags have been incorporated remarkably. The top half of the tree, which is the leaves, has demonstrated the American flag perfectly. The red and white stripes, along with the blue portion containing the stars, have been included very well. At the same time, the roots of the tree have also been accurately divided into the three flag colors of Mexico with the emblem in the center. Overall, a very creative and unique piece of art.

This tattoo is situated on the leg area. Half of the tattoo has been colored, and the rest half has been left blank. If you look closely, you’ll notice that the tattoo is in the shape of a bullet. It is symbolic as it’s a patriotic tattoo and the rough wear and tears on the tattoo perfectly fit in with the bullet shape.

Did you not find your perfect Mexican American flag tattoo design yet? Don’t worry; you can check the following list for more options.

What does the Mexican American flag tattoo represent?

The Mexican American flag tattoo is a symbol of pride and identity for those of Mexican heritage. It often features the colors red, white, and green in horizontal stripes – which represent the shared cultural history of Mexico and the United States. The central emblem is often based on the national seal of Mexico, featuring an eagle perched on a cactus with a snake in its mouth. This symbolizes strength, resilience, and the fight for freedom and justice. The tattoo is a sign of Mexican American pride and represents the unity between two nations. It also serves as a reminder of past struggles and victories that have been fought throughout history by members of the Mexican-American community. In recent years, it has become increasingly popular among people of all backgrounds, as it is a powerful symbol of solidarity and unity. Whether worn as a large back piece or in smaller sizes on the arm, neck, or hand, the Mexican American flag tattoo is an incredibly meaningful design that speaks to one’s cultural identity.

Who typically gets a Mexican American flag tattoo?

The Mexican American flag tattoo is typically worn by people of Mexican or Mexican-American heritage. It is also popular among members of the Latinx community, as well as anyone who wants to show solidarity with their peers and celebrate their shared cultural history. The design has become increasingly popular in recent years and can be seen on individuals from all walks of life. Many people wear it to commemorate a special event, such as a trip to Mexico or the birth of a child. Others choose to get the design simply because they identify with the symbolism and want to express their pride in their heritage. Regardless of motivation, wearing this tattoo is an opportunity for anyone to show their appreciation for Mexican culture and pride in their heritage.

What are the colors of the Mexican American flag tattoo?

The Mexican American flag tattoo typically features the colors red, white, and green in horizontal stripes. The red symbolizes the blood shed for liberation and revolution, whereas the white stands for peace and unity between two nations. The green represents hope for a prosperous future. In some designs, a fourth color is included – gold – which pays tribute to the Aztec heritage of Mexico. The central emblem of the tattoo is based on the national seal of Mexico, featuring an eagle perched on a cactus with a snake in its mouth. This symbolizes strength, resilience, and the fight for freedom and justice. Together, these colors represent the shared cultural history between Mexico and the United States.

What are some of the most popular Mexican American flag tattoos?

Popular Mexican American flag tattoos often feature an eagle perched atop a cactus with a snake in its mouth. This is the symbol of Mexico’s national seal, and it represents strength, resilience, and the fight for freedom and justice. The design may be incorporated into other imagery such as skulls or flowers, representing both life and death. Another popular design is one that features the Mexican American flag in its complete form, with all three stripes and the central emblem included. This tattoo can be worn as a large back piece or in smaller sizes on the arm, neck, or hand. Some people also choose to get their names incorporated into their Mexican American flag tattoos, serving as a reminder of their identity and pride in their heritage.

How can I personalize my Mexican American flag tattoo?

The Mexican American flag tattoo can be personalized in a variety of ways. Depending on the size and placement, you could incorporate other symbols or images that are meaningful to you such as skulls, flowers, hearts, or your favorite animal. It is also possible to add text or words that represent something important to you such as a saying, quote, or your own name. You could also choose to add other colors or a unique shading technique in order to make the tattoo more distinct and personal. Personalizing your Mexican American flag tattoo will ensure that it is truly one-of-a-kind and expresses your individual connection with the culture of Mexico.