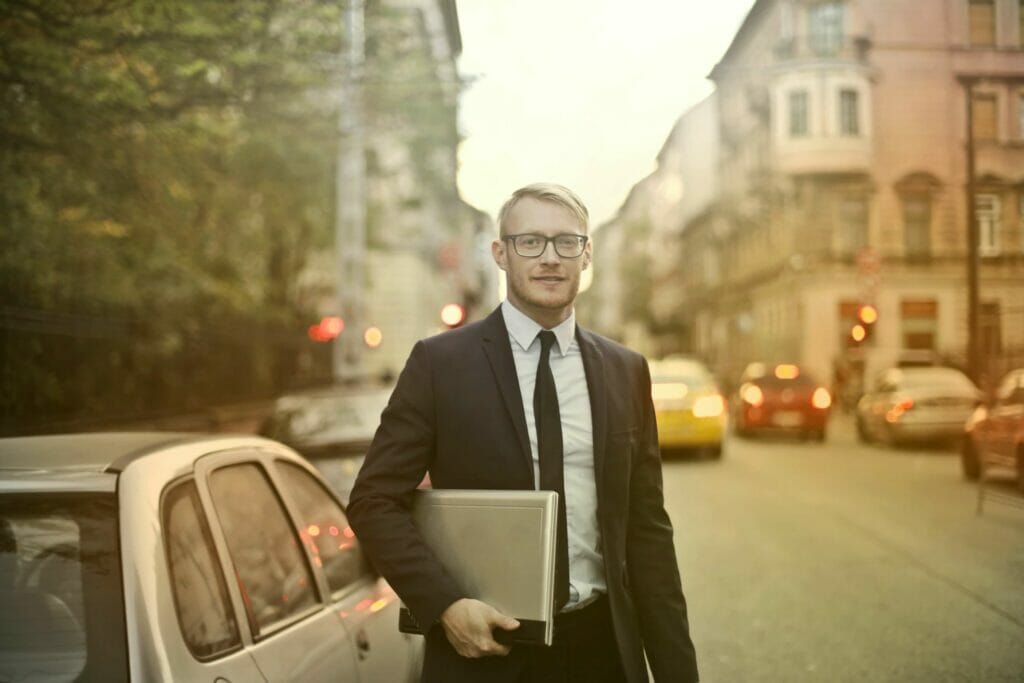 The Black suit is a staple for funeral goers across the world, a staple for the most notorious criminal gangs across the world, but otherwise, it is the indicator of the unimaginative. A little harsh, maybe, but a constant black suit wearer is certainly a fence sitter. Of course, there are circumstances to wearing a black suit; for example, as one of your rotated suits (to keep the others fresh), or because it works really well with one of your shirts, or even as a one-off because you spent a lot of money on it and you never wear it. However, generally it is an uninspired choice, even if it does look really slick and stylish.

As I previously worked in a corporate environment, it wasn’t hard to notice that black was hardly ever worn around the office, so I had to alter my style slightly to make a black suit more interesting. Yes, it looks clean and slimming, but it has an air of gloom about it. The men’s tailored suit is often seen historically as an outfit for men of the western world’s conservative or wealthy nature. It’s a rookie mistake in thinking despite the formal meaning of the tailored suit that black is the preferred colour, but it’s not.

Historically it was the benchmark to recognising the working class from the middle class and above. The suited or tailored gent for the last 300 years has always represented a healthy competition of style, as fits, colours, and designs have been pondered over for all that time. In fact, it’s hard to work out what worked and what didn’t because anything less than a suit or an equivalent formal attire was a sign of poverty to an extent. At this point in time, the days of Levis and a flannel shirt being mainstream in contemporary fashion was a long way off.

As World War II ended, the sense of victory began to filter into modern culture, with risk and rebellion being soaked into fashion. The older generation maintained their formal look but their children adopted the less formal preppy look or jeans style. Suits though did start to modernise as double-breasted suits started to become less popular and lapels started shrinking to a moderate size. As shown in the picture below, a president during the 1960s didn’t stick to suits on a vacation like a president of the 1920s would of.

With fashion becoming a part of the everyday culture during the 1970s, the slim fit type suit with flairs and a waistcoat came back into fashion without all of the economic connotations. Iconic films like Saturday night fever, which had John Travolta wearing really the style helped put the style across.

That look wasn’t to last as suits in the 80s did a complete 180 to its 1970s style. The jacket became loose including the sleeves, the trousers became wider-legged and the waistcoat became obsolete. Obviously, this didn’t apply to everybody as traditionalists and ivy leaguers failed to conform to the Miami Vice look, but the perfect suit look had changed once again.

Since the 90s, the look has been a little more consistent with the modern day. Black was back in due to major designers making it popular as both day and nightwear as opposed to just a classy black tie event.

When Black was new, not Orange

Although still not a classic suit for work, the black suit is a great look for formal day events and more importantly attire that can be worn by virtually anybody.

But as I stated in the beginning, it can be very simple and unimaginative at certain times. But what I didn’t say in the beginning is that there are ways to make a black suit more interesting.

It is hard to resist sometimes as black goes with almost anything. You can match it with black shoes and also trainers, any style watch and also a tie. But if your options are endless with everything else, it’s more than likely that if you do go with the black suit, you also go with a white shirt. What other options do you have to make a black suit more interesting?

Well, the answer is a few, but only a few.

With a black suit you have only two stylish options for a plain shirt, white (obviously) and black. People may say grey, or look at lighter colours like peach or pink or a light violet but it will just look too informal. So if you are wearing a black suit, then a black shirt is a great alternative to white. A cotton black shirt can look very good when matched with a black suit, a silk black tie, and a pair of black leather shoes.

A little food for thought would be whether your suit even needs a tie. If it’s not formal then maybe a white patterned shirt will take all the focus away from where the black tie should be.

If it’s formal…make it really formal

You’ll need to be very aware of the occasion. Will you look like a Casino Royale Bond villain at a wedding celebration? If you suspect that it’s a black tie occasion and that every other guy in there will virtually look the same, then you should go all out to impress. So instead of a classic black tie, maybe you go with a classic black bow tie. Although a minor difference, this is a real game changer in the way you look in your suit.

Something else to consider would be your style of suit – Standard or Tuxedo. The black slim fit looks great, but it’s the standard look. Some people will only own a black suit that is a tuxedo suit. Do you have a dress code to follow, and do you have all the essentials in your wardrobe? There isn’t a major difference in tuxedo style with standard retailers, but the trouser leg seam will have a black satin stripe and the suit jacket will have a satin lapel. It’s not a visually standout option, but the tuxedo suit is a subtle yet charismatic choice.

You can wear a black suit with a lot of things but it’s all about when to do so. The time to dress down is the best time to do so because you keep the formal silhouette but you add a little colour to your style. This notion can also work in reverse as you can add a bit of style to your colour.

When adding colour to compliment your suit, you can add any alternative to a formal shirt. The buttoned formal shirt stresses that you are going for the formal look and context and style has gone out the window. Anything but a smart and formal shirt will give the impression of being relaxed and in turn will take the focus of away from the a black suit in reality, to a blazer, top and trousers combination in theory.

Why not style your black suit with a light blue polo shirt or patterned crew neck jumper. Or if you are feeling really creative, why not try with a plaid shirt. What will further help your cause is by leaving the formal shoes behind and wearing a more stylish type shoe like a penny loafer or brogues.

These are a few ways but the main ways of making a black suit more interesting. Since time and fashion have moved on, black has been seen as a fashion statement for the younger generation as a day outfit. That’s not to say it isn’t an option for the older generation, but it is apparent that it’s a trend that belongs away from the boardroom and more at a bar.

What Does A Black Suit Go With?

Black ensembles such a powerful and stylish outfit for both men and women. Most guys love to wear black and elegant suits, while some opt for a charcoal suit. However, black is a classic and stylish fit to consider. If you plan on wearing something good for formal events, here is what to go for:

Do you want a pop of color with your stylish menswear? Wearing a black suit can look trendy, especially when you pair it along with the perfect navy wool coat, and some darker shades in terms of your clothing such as shirt colors or shoes. Most guys opt for a matte finish suit, do you wish to do the same? Find the perfect footwear and show off your fit proudly no matter the event!