Jeremy Scott X Adidas Bear – All You Need to Know

Looking for a little more information on the Jeremy Scott x Adidas Bear trainers? Check out our comprehensive guide on all you need to know about this… ‘unique’ collaboration.

King of kitsch, Jeremy Scott has collaborated with Adidas on several different projects since his initial foray into sportswear back in 2002. With complete collections, as well as a range of different sneaker lines released since they first teamed up; regardless of what we might think – the products are clearly selling.

One of his more unique designs, the adidas teddy bear shoes have had several iterations since their initial release. Let’s take a look at some of the most memorable designs.

Designer Jeremy Scott is well known for his fun-loving, colourful and bold designs. Unofficially dubbed fashion’s ‘King of Kitsch’ he’s renowned within the fashion community for his parodic designs, poking fun at well known household brand names; from Windex to McDonalds. This unique aesthetic is carries through both his eponymous label and, more recently, Moschino as well as several other design collaborations – notably adidas.

While Jeremy Scott and Adidas first teamed up in 2002 for the ‘!Signed’ project, it wasn’t until 2008 that the relationship was solidified with, what became, a rolling collaboration. Since then, the designer has teamed up with adidas on countless other collections, both apparel and trainers. Some of the more iconic designs include; winged trainers, animal print trainers and a series of stuffed animal options, aptly dubbed the adidas bears. 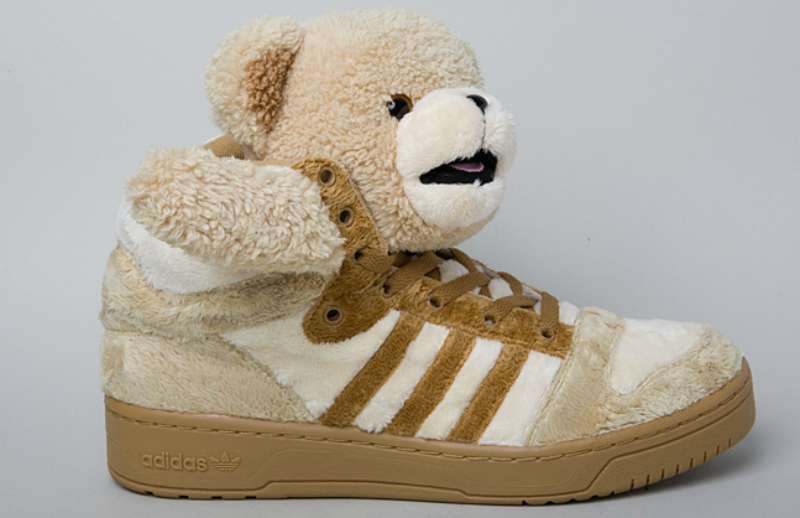 Where to buy a pair of Jeremy Scott X Adidas Bear