The Most Versatile Ways to Wear Joggers

Over the last few years, joggers have gone from street chav to street chic. But are you stuck on how to wear joggers? Here’s our style guide on all the best ways to wear your casual leg wear.

Despite the bad rep they’ve endured over the years, given their less than favourable connotations and intrinsic connection with leisurewear, joggers have garnered increasing popularity in recent seasons, acting as a key component in the ever-prevalent sportswear trend.

With everyone from high street brands to high-end designers cashing in on the action, the once sportswear staple has undergone a transformation, creating a name for itself as a casual and contemporary must-have for any modern man’s wardrobe.

While at first glance there doesn’t seem to be a lot of variety to this on trend item, it’s actually more versatile than you’d think, and there are a lot of different styles you can go for.

Jogging bottoms were originally made for people to exercise in. They are typically lightweight, comfortable, and made from soft cotton or polyester. In past years, if you were caught wearing joggers out in public, you would swiftly become a social pariah.

Fortunately, over the last few years, a revolution in men’s fashion has taken place. It’s now not only socially acceptable to wear joggers out in public, it’s actually fashionable. As sportswear style has become more and more fashionable, so have tracksuit bottoms.

In the past, joggers would probably have been baggy and loose. Nowadays, to keep in line with trends, the best joggers you will see are tapered in the leg. This makes them look great in a number of ways and in combination with other clothes. So, here’s some ideas on what to wear them with.

Shirts to Wear with Sweatpants

T-shirts are the epitome of men’s casual fashion. They’re versatile, comfortable and can be worn with more or less anything. This makes them the perfect complimentary item of clothing to wear with joggers. The casual nature of a T-shirt will go perfectly with the sportswear style of tracksuit bottoms.

The easiest way to wear joggers is of course how they were originally intended to be styled – casually. What’s more casual (as well as stylish) than a T-shirt? Grabbing yourself a slim fit, crew cut T-shirt and throwing it on with a pair of plain joggers is an effortless and stylish look that you can mix up at will.

Go for a monotone look with a light pair of black jogging pants and a plain T-shirt, or vice versa, and leave it at that for a clean look, then pair with a pair of simple trainers to complete the understated and laid back look.

For a more vibrant look you can experiment with colours and patterns, creating a more eye-catching look. If you’re going for a bright top, try keeping the rest of your outfit neutral to keep your look grounded. Too many colours together will just look over the top and messy, and detract from the stylised vibe you’re going for.

So you might not think it’s possible, but there is a way to achieve a smart-casual (although very much leaning towards casual) look with a pair of joggers and a T-shirt. It all depends on what materials you use and the fit.

Tailored joggers, or sweatpants, are a good choice if you’re going for a more formal look, but you have to make sure that you get the right one for you. Don’t go too tight, or you’ll end up looking like you’re wearing leggings, and there should be a drop in the crotch so that things aren’t too binding.

Find a T-shirt that fits you like a glove and is made from a good quality material like 100% cotton. Your joggers would need to be slim fit and made of a study material like corduroy to keep the look as far away from relaxed as possible. Then just slip on a pair of suede loafers and you’re all set. We wouldn’t recommend wearing this outfit to work, but you could pull it off on a first date or night out.

A shirt has its advantages in both summer and winter due to its versatility and the number of ways it can be worn. Open, buttoned up, half buttoned, with the sleeves down, with the sleeves rolled up – there’s options for everyone. For a casual look you can easily sport a short sleeved shirt with a pair of plain joggers, finished off with some neutral plimsolls or boat shoes. Adding accessories like a matching cap can help bring the look together, and the colour scheme can easily be changed around to suit you.

This is not the outfit for that important job meeting, but it is a good alternative to casual chinos and a t-shirt look, and joggers can go surprisingly well with a neat long sleeved oxford shirt. You can go full on smart-casual and pair your shirt and joggers with a pair of trim loafers or keep things grounded with a pair of trainers or plimsolls. This shouldn’t look too out of place as joggers are such a relaxed item that dressing the outfit down with casual footwear is going to work with the look.

A man wears navy joggers with a blue shirt and sunglasses for a casual look
PHOTO CREDIT: Pinterest

Polo shirts originally started as sportswear before they were picked up as a staple item for the Beverly Hills elite, so it makes sense to pair them with something like joggers that are equally sports focused. Although polo shirts are often associated with smarter look, they’re easily dressed down with the right combinations.

Matching one with a pair of joggers in a lighter colour will give the overall look a less intense, and more relaxed, vibe. Then just finish off the look with a pair of trainers or plimsolls and add a few accessories like a cap to keep things looking laid back.

Keeping colours as neutral as possible will help ensure that your outfit doesn’t fall in the overly relaxed department, and will help ground it into a semi-formal look. When picking your polo shirt, make sure it’s well fitted, buttoned up to the neck and ironed.

For the joggers, choose a pair that are made from a thick, sturdy material in a dark colour like a grey or black to match neatly with the shirt. Throw on a good pair of sunglasses in a thin wire design to add a sophisticated element to the look, and finish off with a pair of loafers in a clean suede.

Of course you can get everything perfect with whatever style outfit you’re going for. That short sleeved shirt is crisp and matches perfectly with your corduroy joggers, complimenting your shined loafers to a T. Then you check the weather and it’s clear you’re going to need some kind of coat to stop you turning blue. The good thing about joggers though is that they go with a lot of outerwear choices, so you don’t have to sacrifice style for warmth.

A good denim jacket can save your life, or at least your outfit, multiple times with its versatility and easy comfort. If your outfit veers towards the casual side then a light coloured jacket that reaches to your hip will compliment the look, while keeping your joggers on show. If the whole outfit seems a little too put together, try distressing your jacket to create a grungier vibe.

Although it’s harder to achieve a smarter look with a denim jacket you can create it if you choose the right colour and shape. A more tailored, slim fit design in a dark colour like indigo or grey is the best choice for a smart-casual look and will draw the outfit together, keeping it streamlined and composed. 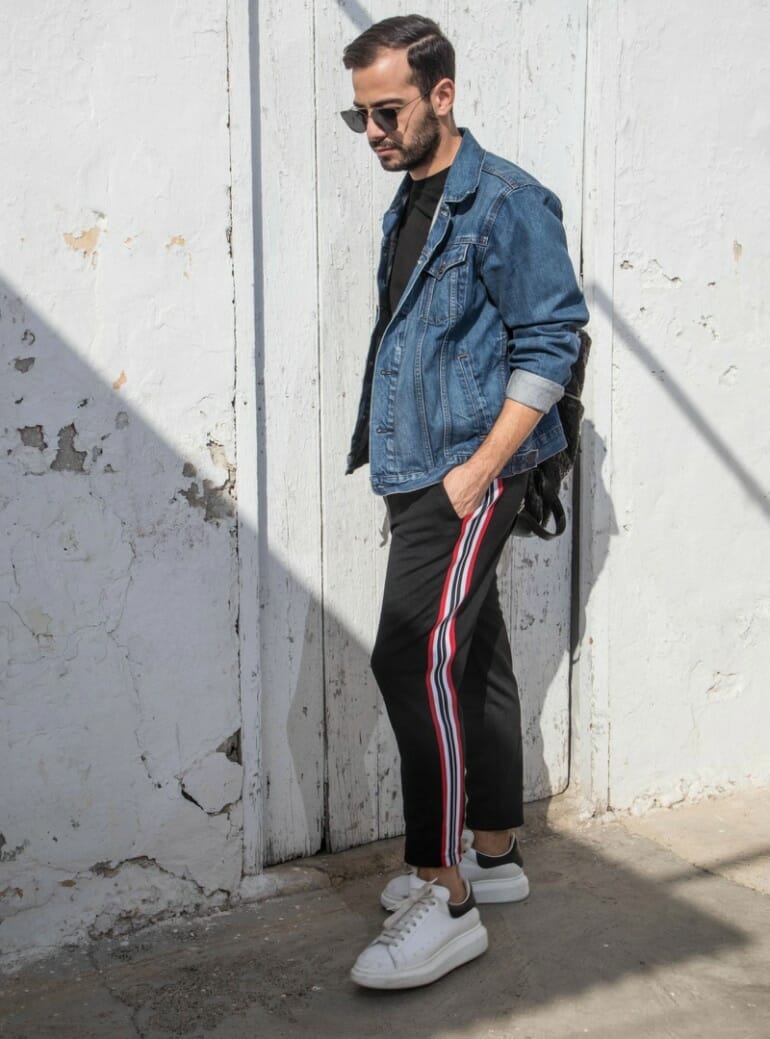 The bomber jacket is one of those designs that comes and goes in popularity, and right now it’s taken over the fashion sphere. Everyone and their grandmothers have at least one, and they’re the perfect jacket to match with joggers as they’re cropped, which helps show off your leg wear, and they’re a relaxed design which compliments the look of the joggers. It’s not really possible to achieve a smart-casual look with this, but the casual look is so spot on that you won’t really care.

A man wears a black pair of joggers with a black bomber jacket
PHOTO CREDIT: Pinterest

Although joggers go more into the sportswear category, and let’s face it, biker jackets don’t, it doesn’t necessarily mean that they won’t go together. Opposite attract after all right? The best way to pull off the combination is to keep the colours as similar as possible.

Don’t go for a pair of beige joggers with a striking leather jacket, as the colours will just be too different to work together. Keep the look neutral with dark colours and slim line shapes. Just think of the joggers as a more comfortable alternative to skinny jeans when you’re dressing up your jacket.

The blazer is a staple that’s been around for generations, and the reason its stood the test of time is it surprising versatility. It completes a classic shirt and tie look for all your formal needs, but it can also match well with more casual looks, including your trusty joggers. You can keep the colours similar for a more streamlined look, and experiment with different textures to create a more visually interesting outfit.

Try to keep the top half of your outfit more casual looking, as anything too formal with clash too much with the joggers. You want to mix and match the formal and casual look, but in an amalgamated way that doesn’t looking too striking.

What Shoes to Wear with Sweatpants

You may be surprised by the variety of footwear that you can combine with joggers, despite certain types of shoe going better with tracksuits.

As you may have already guessed, trainers are an excellent way to finish off your joggers look. No longer is sportswear reserved just for exercise, as it has become more popular as a fashion statement. Instead, items like jogger sweats and trainers have become extremely stylish pieces of men’s fashion. Therefore, if you combine your joggers with a pair of good quality and stylish trainers you can really emphasise the sportswear style that has become so popular.

Any trainers can work, but often a pair Huarache or Roshe style trainers look the best. Although, a pair of Converse or Vans plimsolls can look great as well. It just depends on the particular style you’re trying to go for.

Although it can be a lot trickier to get right, it is possible to wear more formal shoes with jogger  bottoms, especially if you’re trying to get a smart causal look. When attempting to wear smarter shoes with tracksuit bottoms you should probably stick with loafers. Due to the tapering of the tracksuits you will want something that you can wear without socks or laces.

How to Wear Joggers

So there you have it. There’s a huge number of ways you can dress your jogger, from smart to casual looks that will have you experimenting with styles, textures, fits and colours. Remember, if your outfit doesn’t feel right then it probably isn’t, but there are a number of pieces that don’t seem like they’ll go together but will surprise you with how well they fit. There’s not as many rules as you think, so don’t be afraid to try things out.