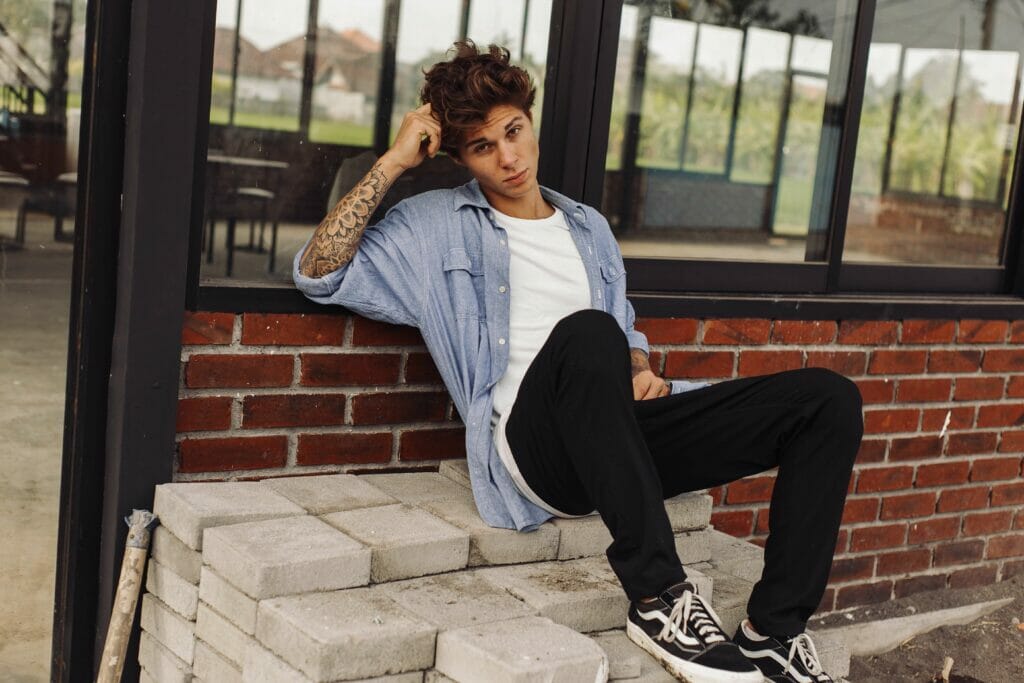 They’re one of the top pieces in every guys wardrobe, taking you from day to night.

Finding its way from WW2 to modern day, the chino has been through it all. Its had a change of shape, look, fit and most importantly colour, allowing it to stay in our wardrobes. You’ll find a use for them, be it for formal or casual wear, this bad boy can adapt to everything.

They’ve come a long way from their predecessor, and uniform ancestor. The chino is definitely a wardrobe staple, but not only that, a transitional pieces to last you years. Master the trend with this how to guide.

Coming from the Hindi word meaning “dusty-colored”, ‘Khaki’ are chinos predecessor. Khaki-coloured cotton pants first appeared in 1846, when British Lieutenant Sir Harry Lumsden was creating an army using British Indian recruits from Peshawar, Pakistan, and thought they’d be more comfortable in their native cultural attire: a cotton smock, pajama trousers and jacket. They were made from home-spun cotton and dyed in mazari (a native palm) and mulberry juice, giving the cotton a yellow-ish tone. Hence the name.

They first appeared in the United States Army during the Spanish-American war of 1898 while the U.S. Army was occupying the Philippines. The soldiers called the comfortable current cotton twill khaki trousers, chino, derived from the Spanish word for China, because the twill cloth was woven in China or the pants were made in China.

The modern style is said to have been developed by the Chinese manufacturers who made alterations on the original British design to conserve cloth, such as changing the original pleated-front design to a flat front, having fewer pockets and tapering the legs. The fabric was also lighter weight than the British khakis to keep the soldiers cool in the Philippine humidity and heat.

Because of the variations in plant-based and natural dyes and the need for uniforms to be more camouflaged, khaki colouring became darker. Sometime around 1902 when khaki was adopted for the continental British Service Dress, they became green. Olive green became the standard by all the British Empire armies and the U.S forces in World War I. By WWII, the olive tone totally flipped to the current olive green.

After WWII, soldiers continued wearing their military uniform as citizen clothing. In the late 1940s and 1950s, pleated dress pants were all the rage, but there was a wide divide between professional attire and weekend wear. Flat-front, cotton twill chinos entered the closet to become a smart look for men. Even Steve McQueen incorporated light-coloured chinos into his heavily dominated t-shirt and jean wardrobe.

We can now find chinos in every shade of the rainbow and all of the colours in between, making it easier for you to find that perfect pair, or even build your collection so you can pick and choose depending on your mood, or the occasion.

The neutral tones allow you to dress up you outfit, or down. But this also achievable with other tones, such as burgundy. There are also a range of fits, varying from loose to skinny, similar to jeans, giving you that extra added comfort of preferred fit.

Apart from the usual culprits, David Beckham and Kanye, other celebrities are also capable of mastering the trend. Zac Efron dresses his up with brown brogues and a blue shirt to match his darker blue chinos, but keeps it casual with a leather jacket.

Whereas, Oliver Cheshire keeps his whole look casual but pairing his beige chinos with trainers, a plain white tee and denim jacket. Again keeping his casual, Chris Hemsworth teams his with a floaty shirt and boots. These celebs show us that chinos can literally be paired with anything, particularly if you stick to neutral tones.

How to Wear Your Chinos

Make like Zac and Chris by keeping your chino outfit casual. Team with a basic tee of any colour, trainers and a bomber jacket. If you want to mix things up even more, then pair with bright coloured trainers or a printed shirt.

If you’re after a formal look but want to scrap the suit trousers, then chinos are a great alternative. Style your black or navy chinos with brogues and a slick shirt, topped off with a blazer for that extra formal presentation. You could even throw in some braces for a hipster vibe.

Evolving from uniform, to formal wear to everyday wear, the chino is clearly an item that will find its way into every generation’s wardrobe. And with modern updates, they’re available in a wide range of colours and fits allowing you to adapt them to your mood, event and formality.

You’ll never run out of outfit combinations by sticking to neutral tones, but if you’re looking to mix things up, then you have the option to. The chino is an item that has never ending options.. A great wardrobe staple.