How to Spot Fake Yeezy’s

Undoubtedly some of the most popular shoes around, Kanye West’s Yeezy 350s are a holy grail for sneakerheads. However, more and more copies of the shoes are popping up, with the replicas being as good as the real deal. Take a look at our guide on how to spot fake Yeezy’s.

Kanye West shocked the world of both fashion and sneaker culture when he announced that he would be leaving Nike for Adidas. The world was excited to see what the Chicago native would cook up in the design kitchen. After much excitement, the Yeezy 350 was ready for the world to see and received widespread applause. However, as always, bootleggers were just as excited as they could now replicate the shoe to sell 100% genuine authentic Yeezy fake.

Nowadays everywhere you look there are fake Yeezy’s. More often than not, the people wearing them either don’t know that they’re fake or have been sold fakes through a reseller. Thankfully, we’ve put together this guide on how you can spot fake Yeezy’s and don’t get called out. 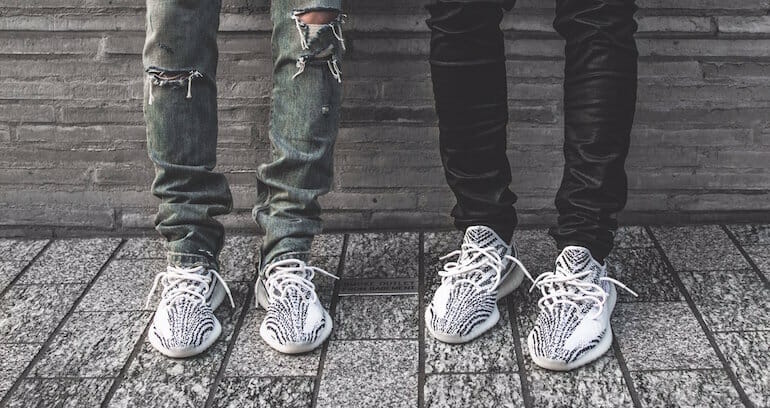 Although replica Yeezy Boost 350s are getting extremely hard to tell apart from the real deal, there are a few telltale signs. We’ll run you through them and break them down so you know what to look for and don’t end up being sold fakes. These signs are crucial when you want to know how to spot fake Yeezy’s so pay attention kids.

This is the same for both the V1 or V2 and is vital to pay attention to. The stitching should cross over and have a square gap between each ‘X’ shape. If you look at the picture below you can see how the picture on the right is just a stitching mess. Stitching is an important part of the overall design so make sure that you can see this design properly on your real shoes. It’s a dead giveaway. 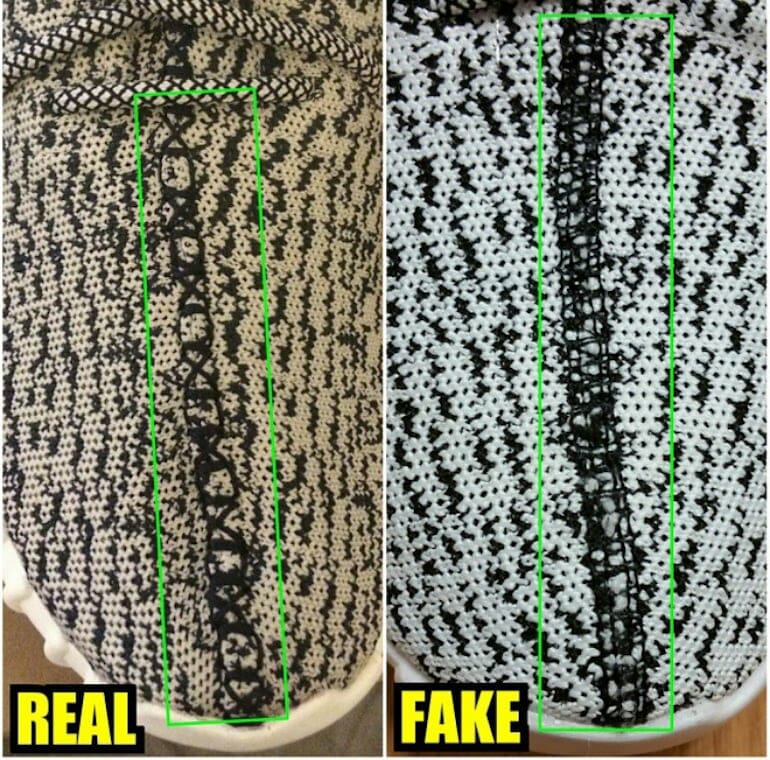 Another obvious sign comes from the heel tab, which should have exactly nine red dots within the centre box. Any more, any less or no centre box at all and well, your shoes are fake. Its one of the simplest ways to tell if they’re replicas and also one of the most tried and tested ways. Take a look at the image below and you will see what we mean. 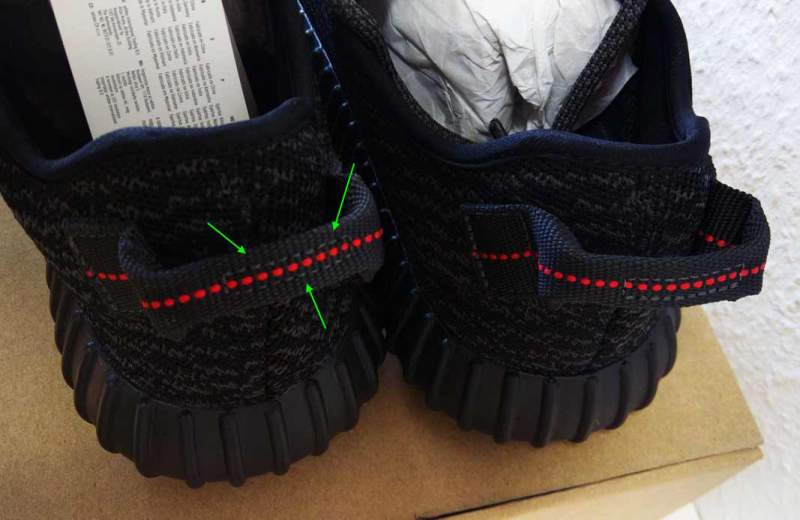 With the V1s, the pattern is also really noticeable on the replicas. The tiny lines in the pattern should be running from left to right and in no case whatsoever in any other direction. The pattern is also a lot more refined on the authentics in comparison to the fakes as you’d expect. Details are crucial. 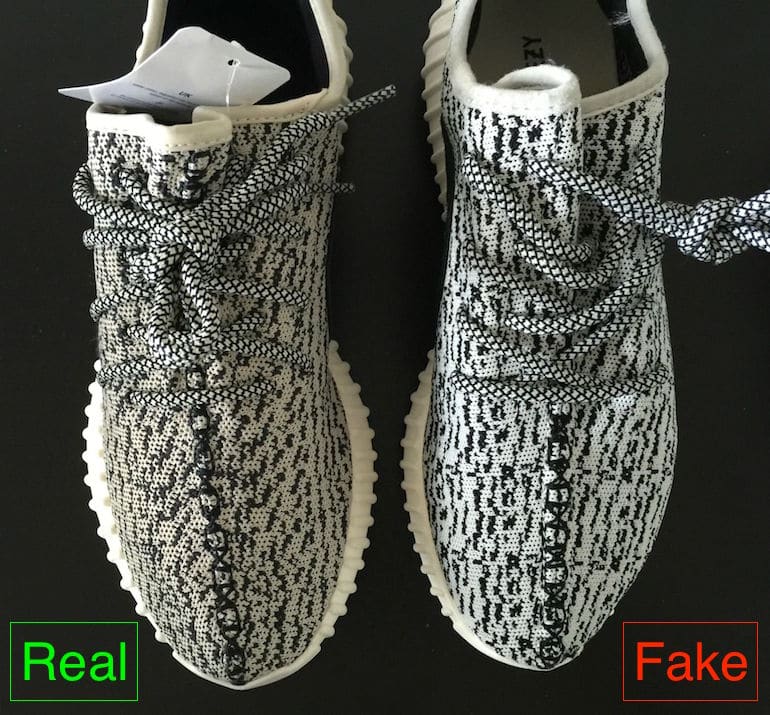 Now when it comes to the inside of your V1s, this is usually the easiest way to spot fake Yeezys. Fake pairs always get this terribly wrong and make the Adidas iconic trefoil and YZY branding too big. Take a look below so you can see what we mean. 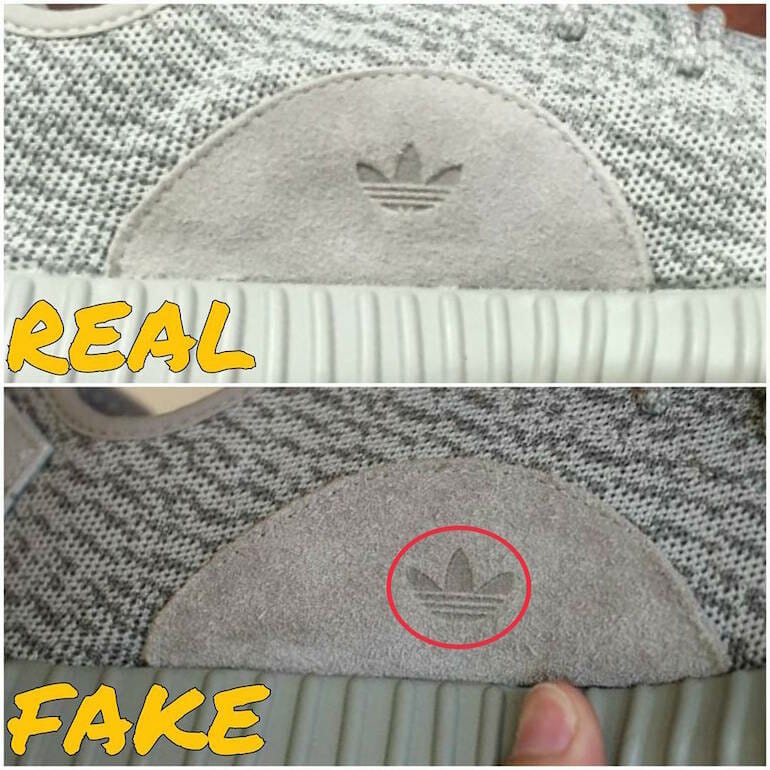 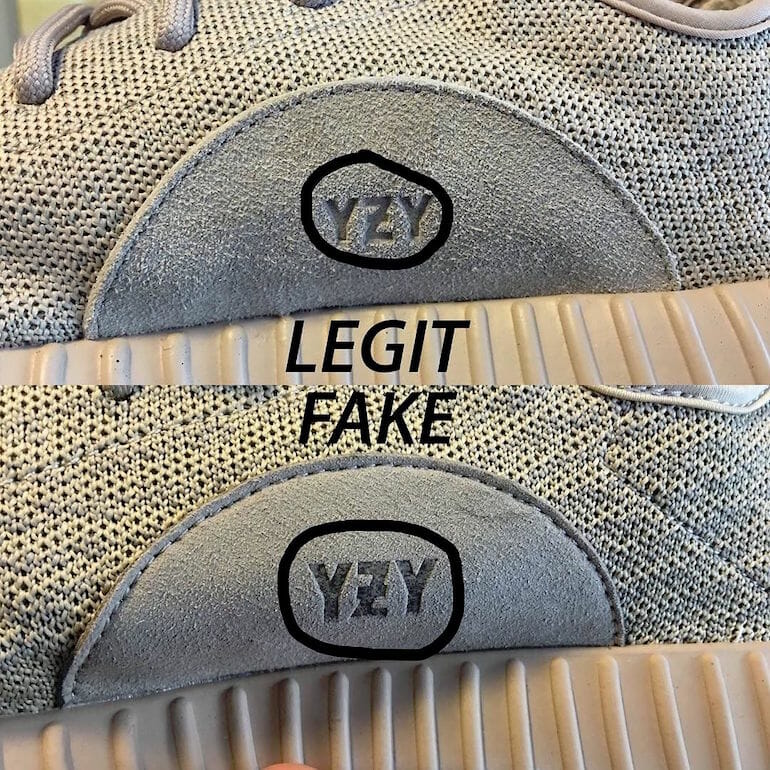 The sole of the shoe is also an easy way to detect if 350s are fake. The signature Boost section of the shoe has a set of dimples that should appear. Basically, these look like tiny little dots and usually appear a few times. Always check the soles of Yeezy’s if you’re buying them, it’s one of the most reliable ways to detect they’re fake on both V1s and V2s. 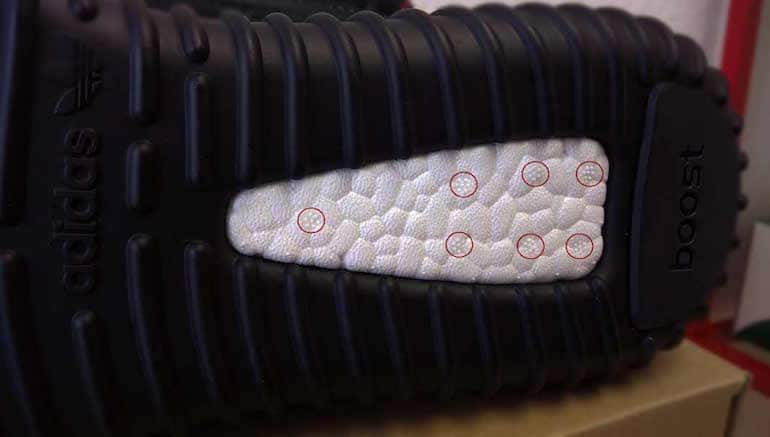 The insoles are also an easy way to tell if Yeezy’s are fake, whether V1 or V2s. They should be mirror one another, not be the same and also have a distinct pattern on the bottom. Take a look below so you can see what we mean by this. 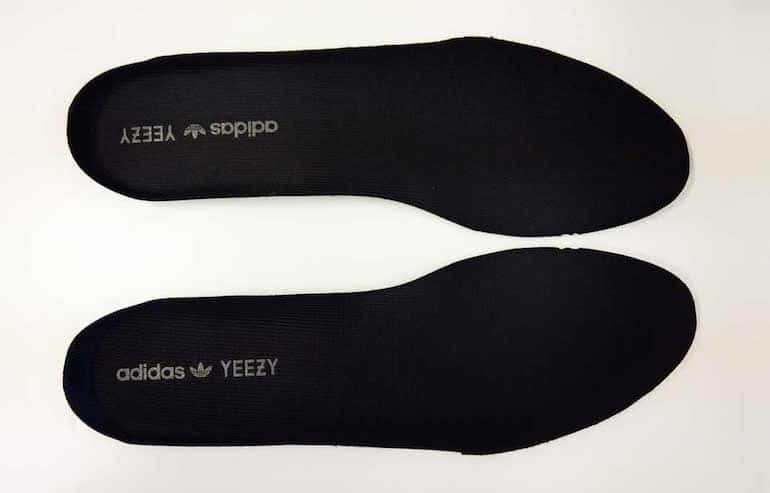 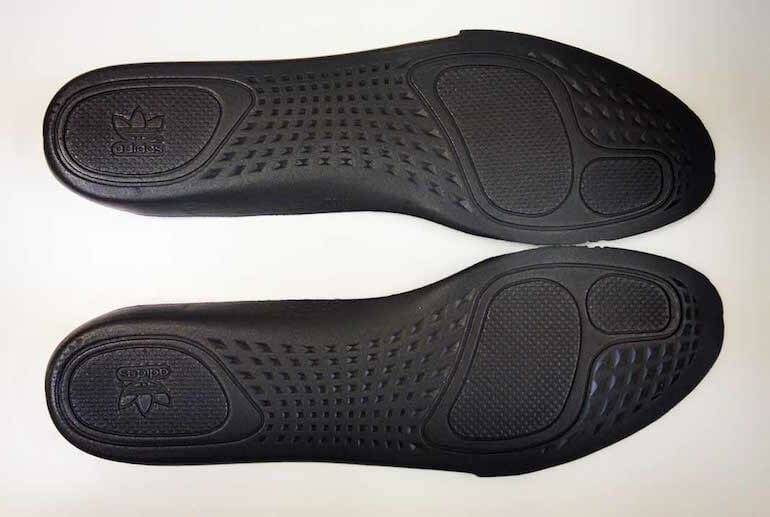 Kanye West’s 350 V2 is the newest shape in the 350 line, copiers haven’t got the design as well replicated as the first renditions. Adidas themselves said that the V2 would be harder to copy and they aren’t wrong. Take a look at these signs so you can spot a Yeezy replica.

The stripe positioning, where it starts and ends, how curved it is and how close to the stitching it all adds up to being able to tell whether a shoe is real or fake. Make sure you get as many pictures as possible if you’re buying through a reseller. 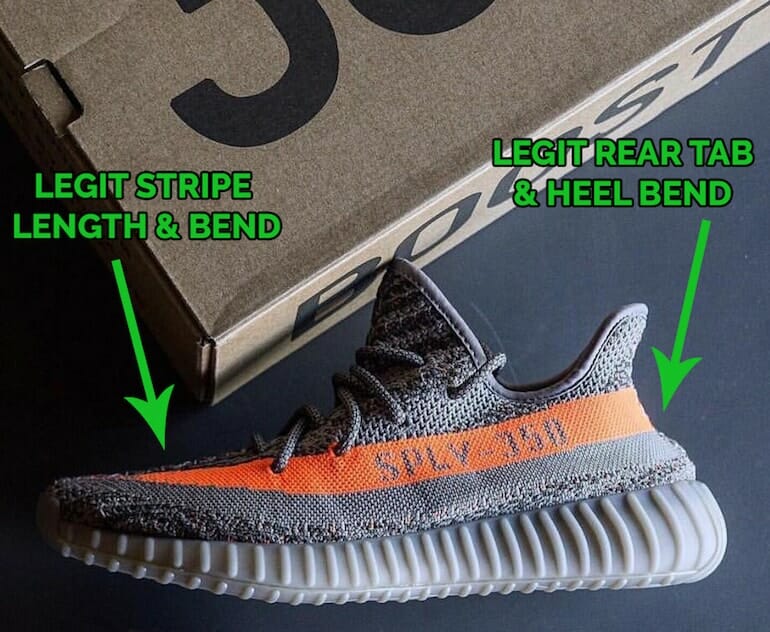 Another big problem with fake Yeezy’s is the lettering. More often than not, fake pairs get the lettering wrong and not lined up properly. The ‘Y’ looks more like a ‘V’ which is a big giveaway in spotting a fake pair. As well as the lettering not being very defined, they are more curved in comparison to the straight lines on the real pairs. 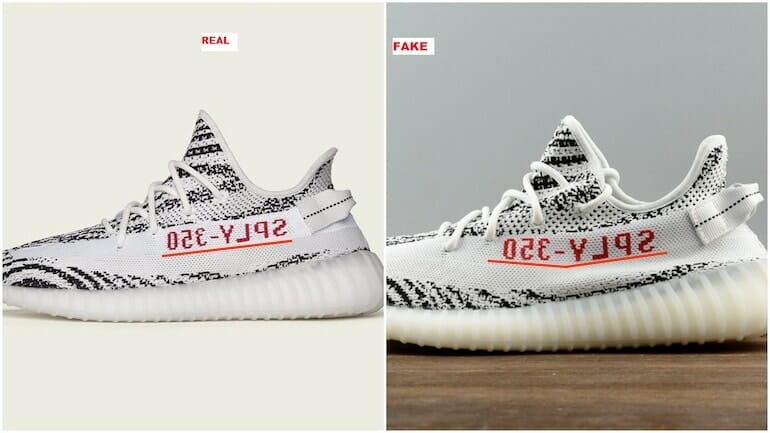 The tongue construction on fake Yeezy’s is also a sign. The overall build quality is always going to be poorer but on fake V2s it’s a big giveaway. The tongue is always pointier and sharper on the real deal, whereas the tongue is crumpled and slouched on replicas. You can see what we mean in the picture below. 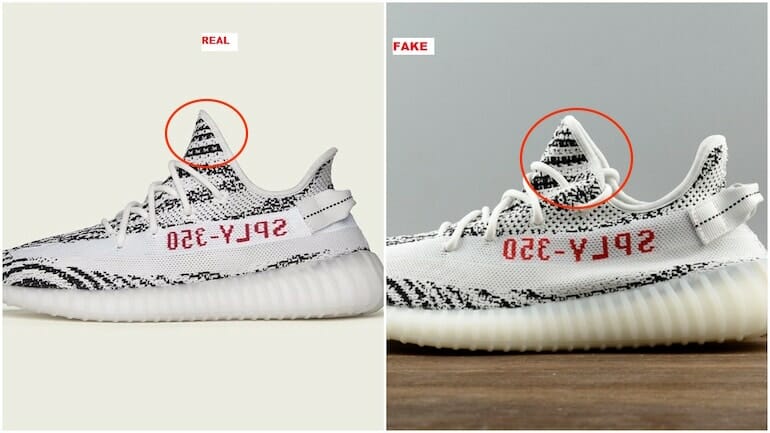 Again this comes down to the replica pairs construction being so poor. The heel tab comes up at a higher point on the authentic pairs and is a lot flatter and wider on the fake pairs. It’s an easy to way to see if Yeezy’s are real or fake so be on the lookout for this too. 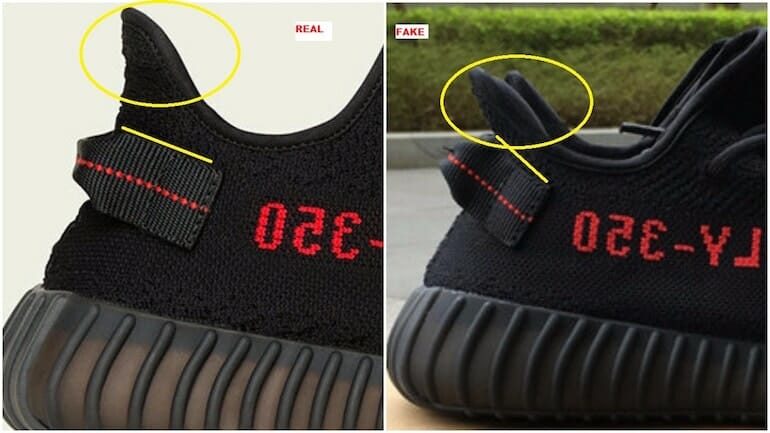 When it comes to the inside heel tab, the coloured striped down the back is a part of the material, whereas on fakes it is printed on. The lines should also be in a completely straight line all the way to the sole so make sure the lines don’t just stop. 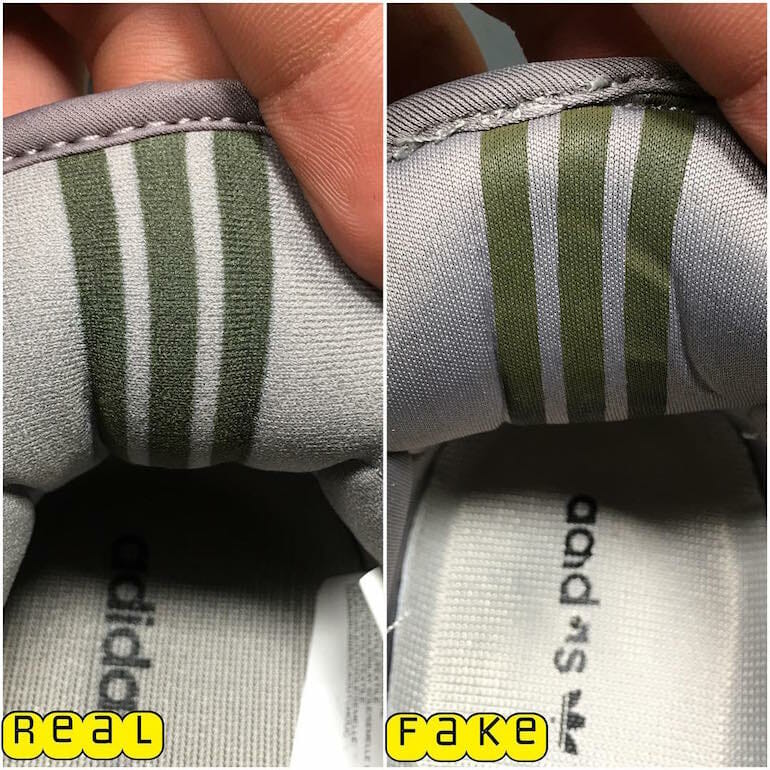 How to Spot Fake Yeezy’s 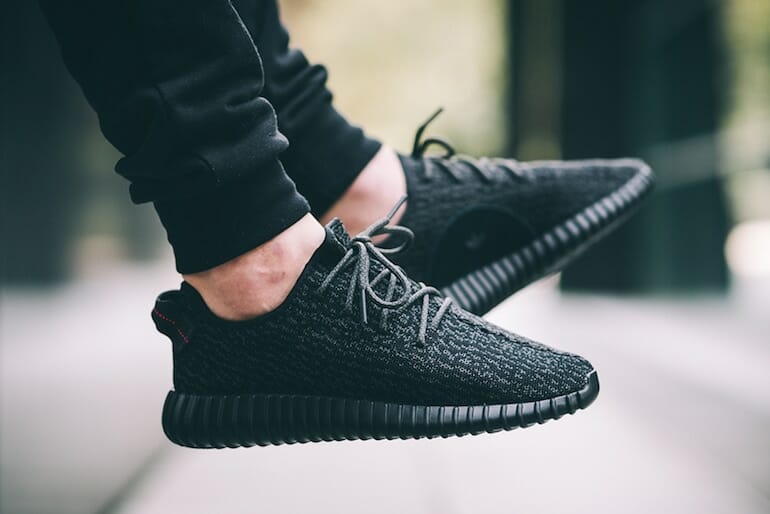 Whether you see them on the street or in a store, Yeezy’s are the most hyped shoe around. However, there are also an enormous amount of fake Yeezy’s for sale which take away from the real credibility of the iconic silhouette. A few important things to remember are the stitching, pattern, construction and overall look and feel of the shoe. If you’re worried about a pair potentially being replicas, then refer back to this guide> we’ve got you.

Where to buy a pair of Yeezy’s