How to Get Tyler The Creator’s Style 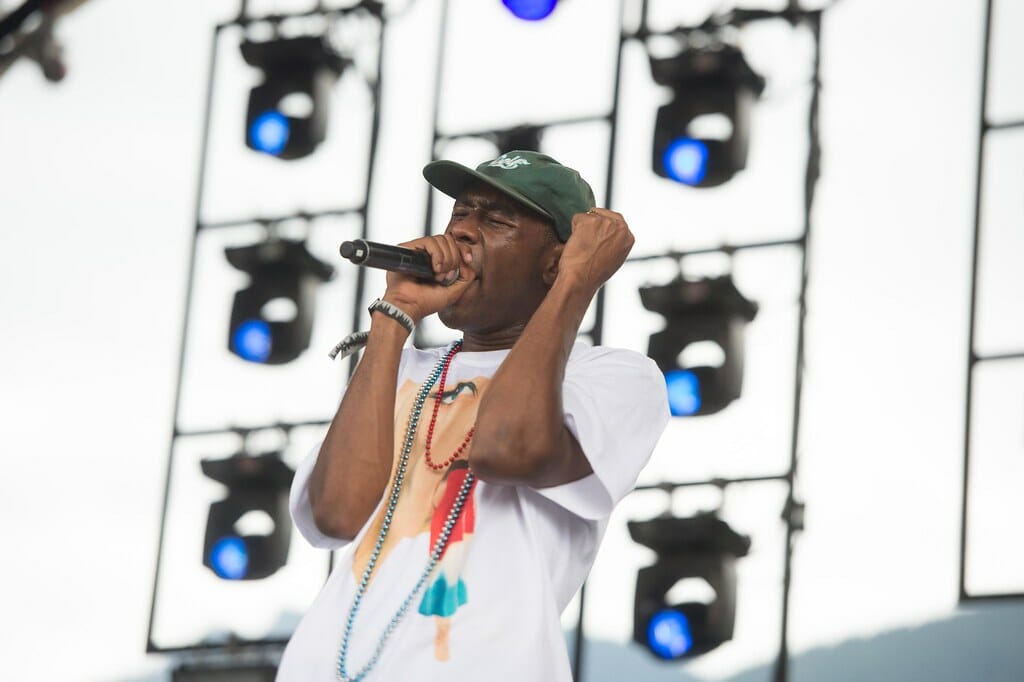 Aside from being an award-winning musician, Tyler the Creator’s style is cool personified. His style is rooted in skate and street fashion, with an LA twist. So if you’re a fan, read our guide on how you can dress like Tyler the Creator.

When he’s not touring the world, being banned from the UK for his lyrics or hanging out with Kendall Jenner, Tyler the Creator is tearing it up in a skate park and looking pretty damn cool. Although the Odd Future creator and star of Loiter Squad keeps it fairly simple with his outfit choices, he exudes and air of, for want of a better phrase, not giving a shit. In an interview with Vogue, the man himself said “It’s always okay to wear whatever the fuck you want” and, well we agree.

So now, let’s get down to it. Here at Outsons, we’re going to show you how you can get Tyler the Creator’s style by simply adding a few things to your wardrobe. It’s not as hard or as expensive as you might think. Have a read below.

Now, the best thing about Tyler the Creator is that his style is very simple to recreate and at minimal expense. Tyler’s style is very much skater based and, as an avid skater, you can see why. Think Vans, hoodies, chinos and hats and you’re on the right track. Take a look at the outfit below and you will see what we mean.

See what we mean? Tyler’s style is very in your face skater, hence the allegiance to the hat and bagginess of the shirt. Skate style is one that is very prominent in Los Angeles and has played a vital role in Odd Future as well as Tyler’s solo career. Nearly every outfit he wears involves a hat so this is a staple piece for you to have to recreate this look. Add in the baggy shirt and undershirt and you’re well on your way to being a certified member of OFWGKTA.

When it comes to trousers, they’ve got to be chinos or chino shorts. American skaters don’t wear anything less and neither should you. In almost every picture, Tyler is in chinos and actually, they’ve made a big resurgence in recent years. Tyler’s style is rooted in this skate style though so think about this when you’re making your lower half choices.

To say that OF’s clothing brand is a bit “out there” would be a rather large underestimation. The designs are often very colourful, loud and involve either a doughnut, the brand’s iconic symbol, or cats. Yeah, we know, hilarious but weird. It’s all a part of the OF act and it’s allowed the brand to have collections sell out for the last five or six years with ease. Owning a hoodie from the Flog Gnaw guys is a fashion statement and has cemented itself into skate culture far beyond they could have imagined.

What makes OF clothing a cult piece of clothing is largely due to the fact that the group changed hip-hop. In a time where all rappers wore Jordans and showed off a plethora of gold chains, OF brought in a new wave of alternative hip-hop. Indie skater kids resonated more with this loud and angry mob of rappers than their Compton associates, hurtling them into stardom and taking their clothing brand with them. “I was fifteen when I first drew that doughnut…I started an empire I ain’t even old enough to drink a fucking beer I’m tipsy off this soda pop”.

The lyrics speak volumes. An edgy teenager full of angst, Tyler’s design appears to have connected with fans and skaters alike. Bands like Trash Talk, a devout punk group, really bought into the whole ethos of OF, mainly because of the anarchical mindset that they share. The roots of the group stand true to this day and this comes out through their designs. They don’t care if you don’t like the cats or the doughnuts because they do. “The difference between me and these other guys is that I make what I like.”

This attitude didn’t go unnoticed and in 2012, skate powerhouse Vans decided to collaborate with the OF gang in what was one of the most anticipated shoes for skaters and sneakerheads alike.

Tyler the Creator and Supreme

Tyler’s affiliation with the box logo brand is one that’s well documented. In fact, it’s probably one of the best-documented friendships from a brand that doesn’t sponsor the artist. As Tyler’s style is rooted in skating and Supreme is a skate brand, the romance just blossomed organically. The mutual respect for each other dates back to 2011 when videos of OF and Tyler himself started to appear online. In fact, he often includes them in a verse on his album: “box logo hoodies and goodies from buddies that understand that Bastard was buzzing like Woody so we get it for free”.

Though there is no evidence to suggest that Tyler and OF do actually get Supreme stuff for free, the chances of this being true are more than likely. What’s great about Tyler and Supreme is that they both stand for the same thing. Iconic box logo hoodies, hats and T-shirts are all a part of the same subcultural dominance as the doughnut and cat symbols that he himself created. To cut a long story short, Supreme and Tyler respect each other because they both don’t give a shit.

How to get Tyler the Creator’s Style

It’s important to remember that dressing like Tyler the Creator is exactly like dressing like a skater, except for the added edge of not caring. You’ve got to be bold in what you wear, otherwise it just won’t look right. Baggy shirts and T-shirts are going to be your best bet, along with chinos and Vans. The added edge of a hat has to be present to carry the whole thing through. If you’re in need, then refer back to this handy guide – we’ve got you covered.