Chris Pine has graced our screens since he started his acting career in 2003. We have watched him grow from a boy to a man and from chick flicks to sci-fi. Now it’s time to reflect back on this career and more importantly, his style.

Chris Pine has been a fairly big name since he started his acting career in 2003. He stole the hearts of girl everywhere when he bagged the role of Nicholas Devereaux, Anna Hathaway’s love interest in The Princess Diaries 2. Since then, he has taken on romantic roles in ‘This Means War‘, ‘Just My Luck‘ and ‘Horrible Bosses 2′ to name a few. His career took a big turn when he boarded the ship and joined the Star Trek team, where Chirs Pine is Captain Kirk. This year, Chris Pine starred in Wonder Woman alongside Gal Gadot, definitely one to watch!

In this guide, we are going to look back on Chris Pine’s best fashion moments and help you re-create the looks. We will make you “Boldly Go Where No Man Has Gone Before”…

Ok, so we just had to throw in an oldie but goldie- he can’t always look good, right? This gem was taken from his role in ‘Just My Luck‘, 2006, where he starred alongside actress Lindsay Lohan. We know, this outfit really isn’t great, but trust us, it has potential. What this look needs, is a little modernisation. If we swap up the T-shirt, change the fit of the jeans and update the trainers, we have the ultimate chill outfit. 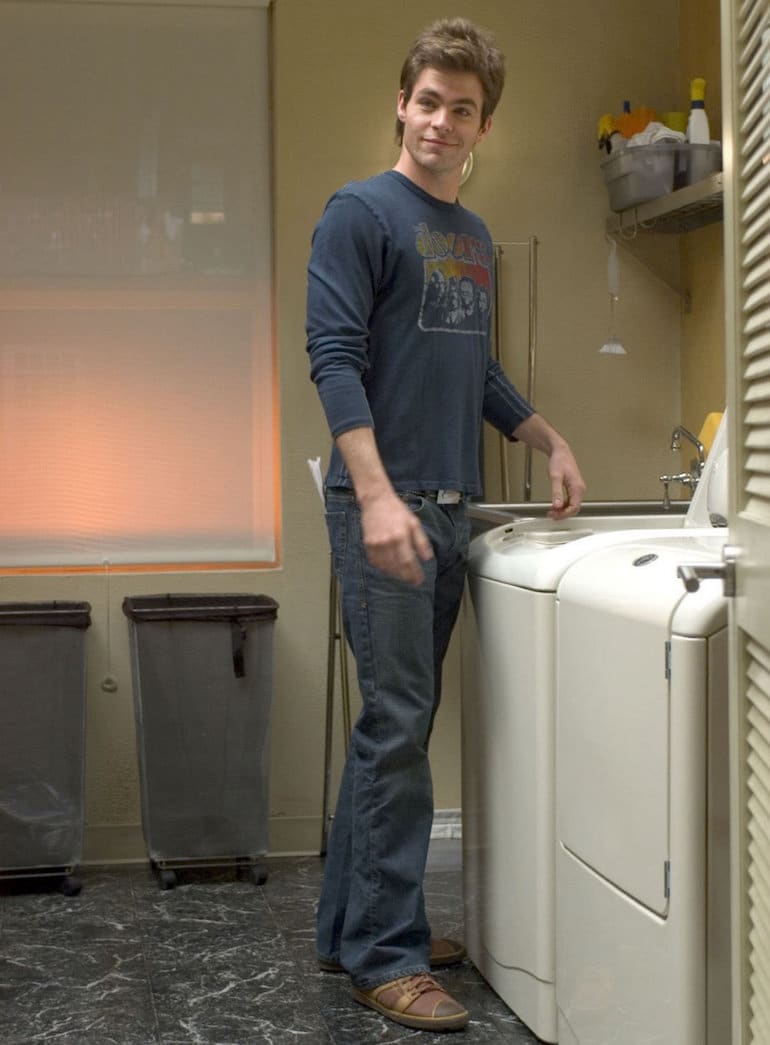 We have chosen to mix up Chris Pine’s style by pairing a white T-shirt with a lighter shade of jean. The jeans are also a slimmer fit, but not skinny. This style is bang on trend and gives off a relaxed feel. To finish off the outfit, we have swapped his clown shoes for a pair of Vans, which are a classic shoe that every man needs. You’re welcome, Chris.

At Outsons, we are a big fan of a beard, especially Pine’s- it’s an impressive transformation. If a beard is something you are considering, we say go for it. There are plenty of products on the market created just for beards. These may sound pointless, a beard grows by itself…but there is, in fact, some sense in these. Beard products are there to help you keep your beard healthy and clean so you can look your best. If you want to get Chris Pine’s beard, make sure you have a beard trimming kit handy to ensure you have that even finish. 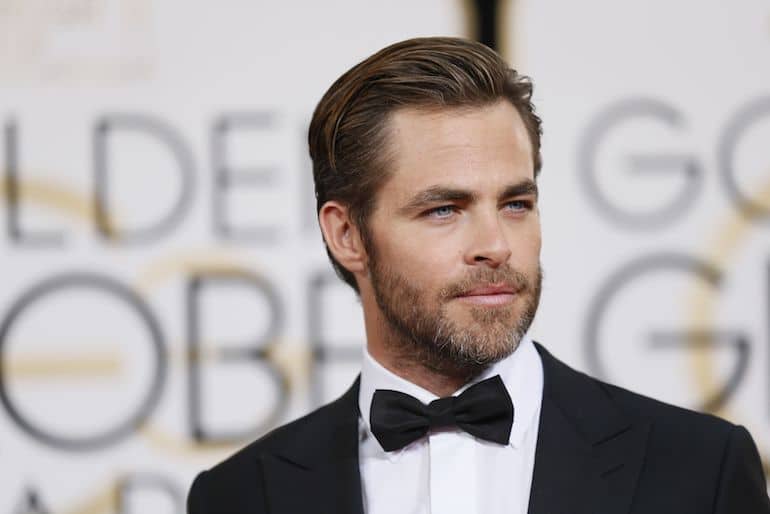 This is a transformation we just aren’t fans of. Why, Pine, why? Chris Pine’s 2016 thick locks were voted one of the best male celebrity hairstyles, but then he went and shaved it all off. I don’t know if we should be blaming it on the buzzcut trend, or maybe it’s some sort of breakdown… who knows. If you are thinking of following the buzzcut trend just remember, hair does not grow as quick as you think it will, so be 100% sure it’s what you want. 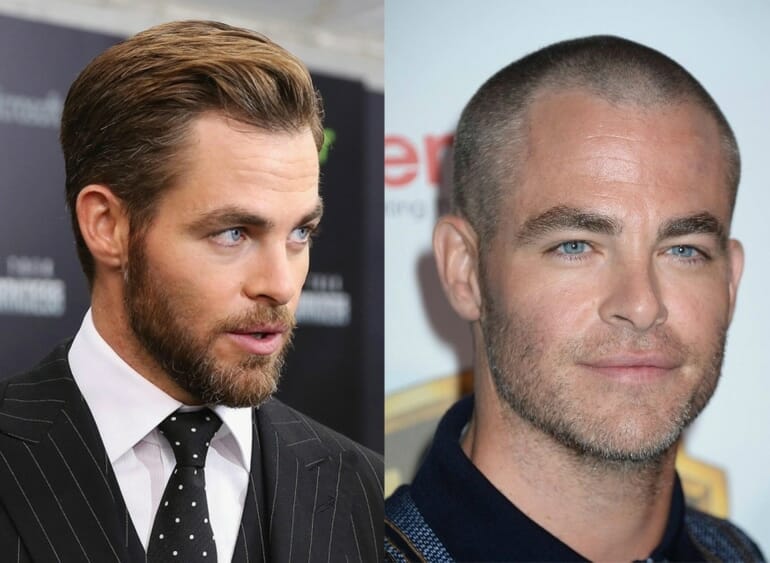 It’s well worth investing in a shampoo that will compliment your hair type, it will make more of a difference than you may think. A comb is a must-have for every man. To get a style like Chris Pine’s hair, post shave, run through a small amount of pomade with your fingertips and even it through your hair with a comb. You can then use the comb to brush it back on the top and sides.

Chris Pine is no stranger to a well-fitted suit, and he knows how to wear one like a gentleman. This three-piece suit adds a little edge to the elegance, with its wide pin stripe contrasted by the polka dot tie. When wearing a three piece suit, you don’t want your tie to clash. Go for something which has the same base colour as the suit, and nothing that will contrast the pattern too much. A pocket square is always a nice touch, just ensure it matches the colour of the shirt so the look ties together (pun intended). 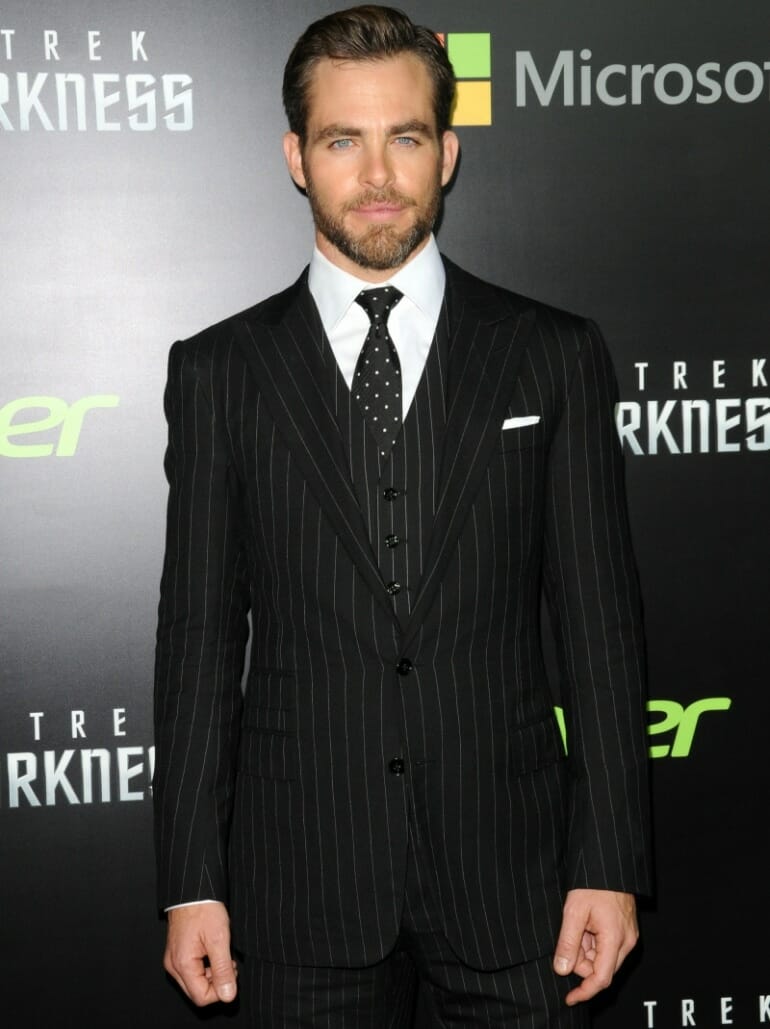 This next look shows off Chris Pine’s ability to dress down a suit. Dressing down a suit is perfect for more casual events or for summer office wear. The key to dressing down a suit is to go for a plain blazer- a patterned blazer is harder to minimalise. Pair your blazer with an unbuttoned shirt (just the top, please) and finish off the look with a colourful pocket square. Depending on how casual you want to go, consider wearing a pair of jeans instead of suit trousers. Match this look with some loafers for a look even Pine will seek after. 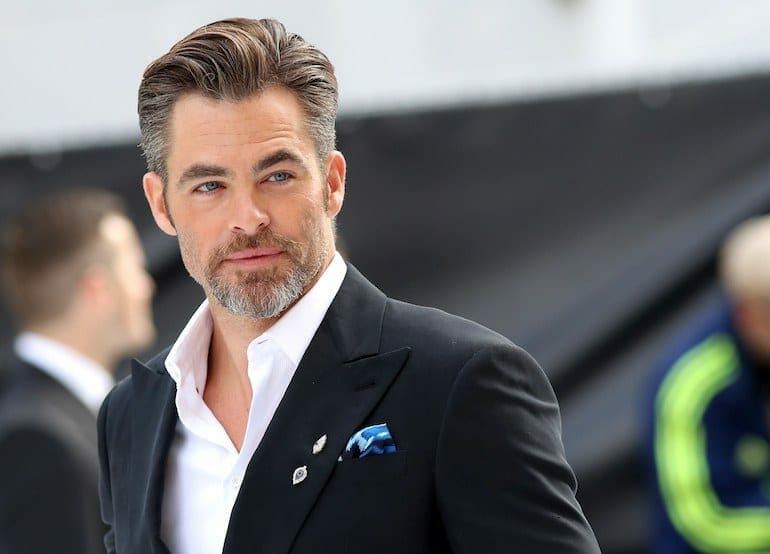 Everyone has their go-to dressing casual style. For some, it may be trackies, for others, jeans and T-shirts. However, for Chris Pine, he seems to opt for a plaid/ checked shirt and a pair of jeans. A checked shirt is a great piece for layering over a T-shirt. For the ultimate casual look, team this outfit with a pair of trainers. 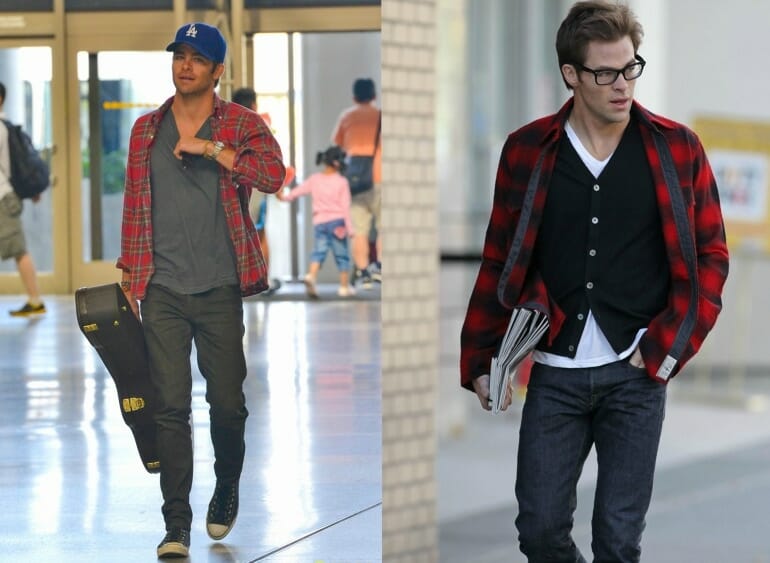 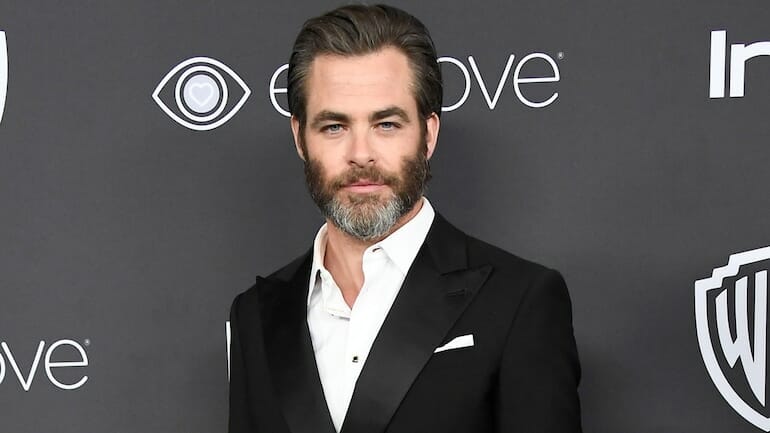 You don’t have to be a sci-fi superfan to dress like Chris Pine (or the lover of a Princess). All you need to ace his style are a few basics and a decent beard-growing ability. Chris Pine is at his best when he’s gone all-out in a three piece suit, with his hair slicked back and his beard groomed to the T. All of these are easy to do when you have the right pieces and products, so stock up and away you go…live long and prosper!