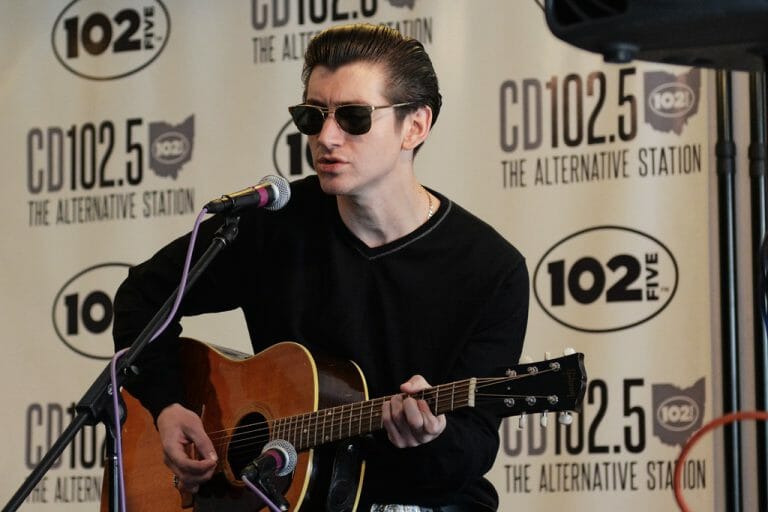 After Alex Turner was voted the coolest person in the world by NME in 2005, things could have easily taken a sartorial turn south; but instead, the Arctic Monkey frontman and indie music darling kept reinventing himself, and has become a symbol for masculine style since. Here’s all you need to know about dressing like the best-dressed rock star in the business.

Who is Alex Turner?

We first met Alex when the Arctic Monkeys burst out of nowhere in 2005 with their album ‘Whatever People Say I Am, That’s What I’m Not’. Their lo-fi Northern swagger was reflected in the way Alex dressed, sporting messy hair, polo shirts and scruffy jeans. But as the band’s sound matured, so too did Alex Turner’s fashion and style. With a little guidance from his fashionista girlfriend Alexa Chung, Alex Turner started to dress with a little more class but no less bravado.

He began favouring more vintage-inspired looks, drawing inspiration from Elvis Presley and James Dean. Today he is celebrated as a unique style icon, throwing back to the Rock and Roll and Mod eras with a contemporary twist. His look is very simple, but stunning when pulled off correctly.

Most people’s first encounter with Alex Turner would have been in 2005, when Arctic Monkeys suddenly shot to success with their first album, still the UK’s best-selling album of all time.

Their songs were edgy garage rock which paid tribute to the joys and tribulations of the nightlife of northern England, and Arctic Monkeys looked authentically from that world. Their clothes attested to their no-nonsense, carefree attitude. Though Alex Turner’s 2007 style has grown more sophisticated over the years, there was a clear sense of authentic expression in his look even then.

Polo shirts are the battle armour of British indie rock bands, from Oasis to the Libertines. Alex Turner was no different, frequently pairing polo shirts with jeans and white trainers for a simple casual look. This blue polo shirt comes from Farah, a legendary menswear company. Their dedication to quality and design has earned them a royal warrant. The shirt is perfect for workwear, or just for a few drinks out with the squad.

To finish off your look, or just if it’s a bit nippy, a stylish addition to a polo shirt is a quality jumper. For the classic Alex Turner look, pair off your shirt with a dark-coloured jumper.

A polo shirt cries out to be paired with a quality pair of jeans. To look like a young Alex Turner, your best bet is a light blue pair of worn-looking slim fit jeans with some fade to give it a character. We recommend a pair of light was jeans with a raw hem, the perfect pair of jeans to have this season.

Alex Turner, From Mod to Rocker

After the release of Arctic Monkeys’ second album, Alex Turner’s style began to mature, partly as a reflection of their darker, more composite sound, partly influenced by his girlfriend, the ever-fashionable Alexa Chung.

His style was still casual, but started to move away from the lad from Yorkshire look and towards looking like a rock and roll icon. The continuing critical and commercial success of Arctic Monkeys also inevitably led to Alex Turner showing up at high-profile events and awards ceremonies, letting us see his smarter side.

Alex Turner frequently sports a trench coat, the easiest way to look classy whilst braving the elements. Don’t make the mistake of wearing an old-style trench coat, which are very dated and make you look like a child playing dress-up. A trimmer contemporary trench coat on the other hand can be a bold, stylish statement that will get you noticed. Trench coats with some colour, such as blue, are usually more versatile for colour matching.

Trench coats look best over a smart suit, and Alex Turner frequently goes the extra mile by assuming a sharp, elegant suit. This stripe blazer from Selected fits the bill, made in a skinny fit for a crisp look, and designed with full lining and pinstripes for an expressively refined bit of formal wear. The blazer is also has side vents for free movement, three inside pockets and a wool blend for functionality and comfort.

Underneath a blazer, you could do worse than wear a crisp white shirt. The Oxford shirt is a wardrobe staple for any man, and can be worn under anything to add a classy, formal layer to your look. Alternatively, this long sleeve white Oxford shirt from Lyle & Scott can be just as easily worn unbuttoned over a vest or t-shirt for some swish vintage style.

A blazer of course has to go with some smart trousers, and these straight leg work pants pictured above are just the thing. Made by Dickies, the largest workwear manufacturer in the world, this street ready design includes wrinkle resistance and stain release, keeping your trousers in pristine condition no matter what.

Alex Turner favours suede for his footwear, so to complete his formal outfit, a pair of suede formal shoes is essential. These Hudsons with premium lining bear the classic Chukka silhouette, a design that has and will remain timeless. These shoes can also be paired with jeans or chinos for a smart casual look.

2009 saw Alex Turner continue down the retro path, but started to experiment more with leather and frayed denim. It was around this time that he really started to cement himself as a fashion icon.

Alex Turner’s look during this era was still very simple, but began favouring darker colours. A good basic item is the denim shirt. A great staple for any man to have n his wardrobe, the denim shirt will accompany any outfit with ease.

If you learn to wear a denim jacket like Alex Turner does, it can add a real rugged masculinity to your look. The staple denim jacket above is ideal, but don’t be fooled by the name, perfect for channelling a more retro vibe the denim jacket will work as perfectly for you as it does for Alex Turner.

For those colder days, which let’s face it, in Britain is most of the time, you can still rock the Alex Turner look with a quality black jacket. This leather jacket from Schott is great addition to any wardrobe. Steeped in style and practicality, this is a jacket you can certainly channel Alex Turner’s style in.

Alex Turner around this time still favoured slim fit jeans, but went for darker, more retro designs, such as these black vintage jeans from Farah. Farah are an American brand originating in the early 20th century who came to prominence dressing the 60s youth culture, before being favoured by the mods and skinheads in Britain. Today their designs blend their classic American look with British sensibilities for an unforgettable vintage look.

Meanwhile, Alex Turner’s taste in shoes became a little more discerning, swapping the casual appeal of white trainers for a more formal look with black boots. These boots come courtesy of Hudson, an authentic London brand that update classic styles for the new generation. The high ankle of these boots provide warmth and support, making this a perfect sturdy winter boot. The decorative finish of these boots make them a great finishing touch to any look, whether smart or casual.

By 2011, Alex Turner had traded his scruffy hair for a clean, slicked-back hairstyle, and started to craft his vintage leather look inspired by 50s rock and roll.

The key to this look of Alex Turner’s is a quality leather jacket, now the Alex Turner leather jacket brand is unknown, but the style still remains. The biker jacket is a classic symbol of Americana style, sported by icons of cool such as James Dean, Elvis Presley and of course Fonzie. To look as cool as the Arctic Monkeys frontman, make sure the jacket is kept fitted, but still loose enough to wear easily over what’s underneath.

A leather jacket will go with any casual outfit, and is a wardrobe staple for any man who wants to look timelessly stylish. This jacket is brought to you by Schott NYC, an authentic New York company whose designs for 100 years have been part of the fabric of American culture. The Perfecto is made of genuine steerhide leather, and has a smart finish and fine detailing to let you express the Hell’s Angel that lurks within.

For a playful twist to the biker look, Alex Turner often pairs his leather jacket with a shirt bearing a voguish print. The short sleeve shirt above comes courtesy of Edwin, the innovative Japanese company, and sports a beautiful geometric pattern that’ll turn heads whether on a night out or at work.

An alternative to the biker jacket is another favourite of Alex Tuner’s: the varsity jacket. Another classic menswear piece stemming from the 1950’s creates a different yet classic look that will currently impress many. Make your jacket the focal point to your look and team it with a simple look underneath; a plain T-shirt and some black jeans.

Alex Turner usually completes his outfits with some penny loafers, the trailblazer design for slip-on shoes. These penny loafers have a comfortable leather interior and genuine navy suede exterior for that genuine retro look. Also, these loafers let you sing Blue Suede Shoes and really mean it.

With just a bit of thought, it isn’t difficult to emulate any one of the looks of rock star and fashion icon Alex Turner. So much of his career left ahead of him, we can’t wait to see what kind of style he’ll put together next.