How Sneakers Are Taking Over Fashion Week 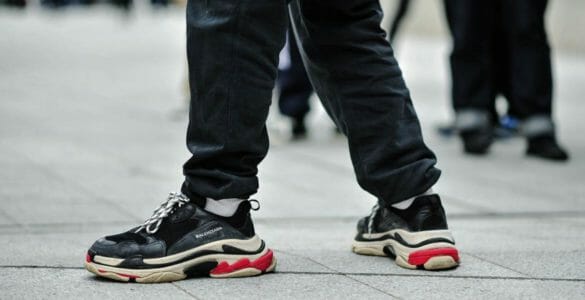 With fashion week month in full swing, we can’t help but notice just how prominent sneakers have become as a part of fashion week. Whether it’s on the runway, or on the feet of the stylish attendees, they’re just about everywhere, we’re going to read into this in depth during this article.

The relationship between high end fashion and streetwear/urban culture just seems to be getting stronger and stronger. With brands like Balenciaga, Off-White, and Vetements bridging the gap between the two, even some of the most traditional designers have started showing elements of streetwear among their collections. Of course, streetwear and sneakers also go hand in hand. So with the rise of streetwear inspired fashion, sneakers have also become extremely prominent during runway shows, as well as being rocked by the majority of the super fashionable crowd.

Many designers have been approaching sportswear brands such as Nike, adidas and Puma and asking them to volunteer their latest unreleased silhouettes to appear in catwalk shoes. It adds a brand new and exciting twist to a show, allowing it to easily stand out from the rest of the bunch. 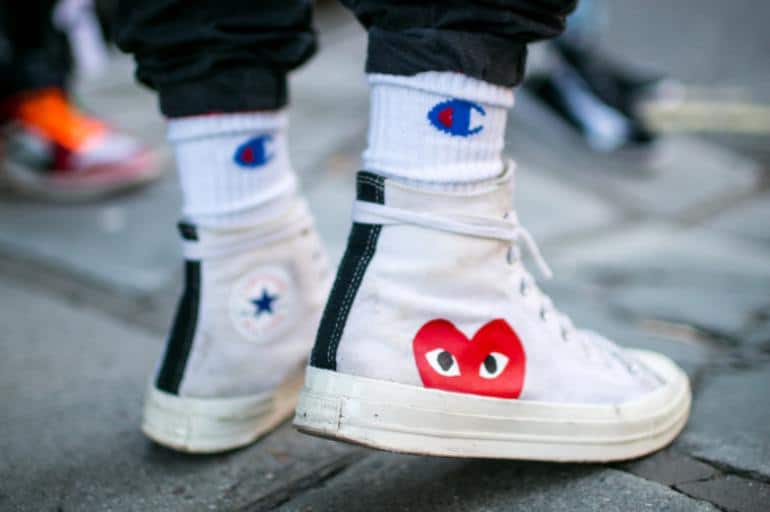 Trainers are now just as important as the rest of an outfit, and whereas before fashion week attendees would be rocking their most stylish pair of Chelsea boots or loafers, they’ve now been swapped out for the likes of Balenciaga Triple S sneakers, Gucci Aces, or even just plain old Converse or Vans. To the fashion week attendees, sneakers have almost become the centrepiece of their outfit, the footwear flex is the most important flex.

There are several reasons why this may of occurred. First off, is fashion just evolving? Of course, traditional fashion will always be relevant, however, it’s also always pioneered by a new generation of designers, who grew up being influenced by a whole different culture and experienced their youth totally differently to the generation before them. Rick Owens is a prime example of this. In 2006, for the first time ever, he dressed all of his models in original leather basketball dunks, which actually went on to become a cult classic. Since then, Rick has gone on to release a whole range of sneakers, even including a collaboration with none other than adidas, producing some very desirable sneakers. 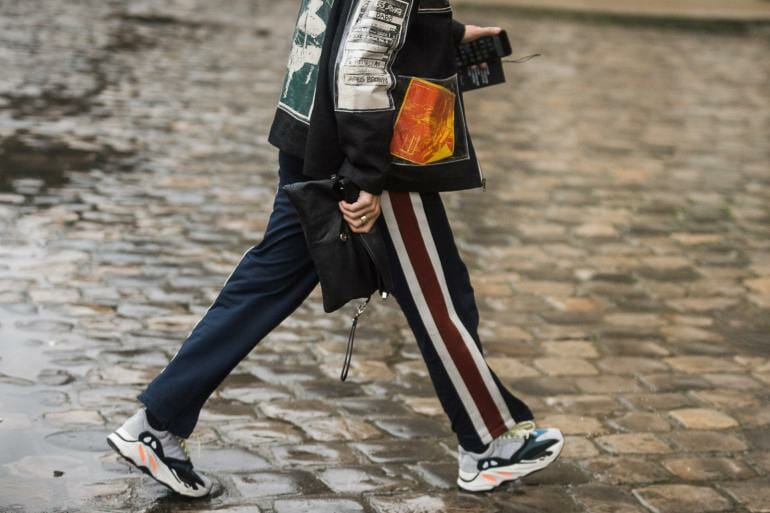 It could also be due to the increasing number of high-end/streetwear collaborations that are happening. The most notorious example of this being the Supreme x Louis Vuitton capsule collection that launched last year. Maybe these collaborations are making many fashion fans aware of a whole new genre of fashion that they were previously unaware of? There are many possibilities here.

Sneakers are also appearing more often on the runway, as well as off the runway. There’s been many examples of this recently, the most recent being the brand new and as of yet unreleased Air Max 270 appearing in several runway shows this season. The Astrid Andersen show at LFWM FW18 saw every single model wearing a striking sunburst colourway of the new runner, and it sparked a lot of attention surrounding the silhouette’s release. Y3’s recent show at Paris Fashion Week also saw all the models sporting brand new Y3 runners, (Y3 is Yohji Yamamoto’s joint project with Adidas), which also saw the trainers steal much of the spotlight in comparison to the garments on show.

Another fashion show which saw brand new sneakers unveiled was COMME des GARÇONS SS17 runway show. Each of the models wore a pair of at this point unreleased Nike Vapormax. The sneakers were not set for release until months after they debuted at the show, and sneakerheads amongst the crowd were left in shock after seeing the sneaker with no prior warning. Many who saw the show online went on to post on many Facebook forums and other discussion threads about the mysterious sneaker, questioning where they could get a pair from. 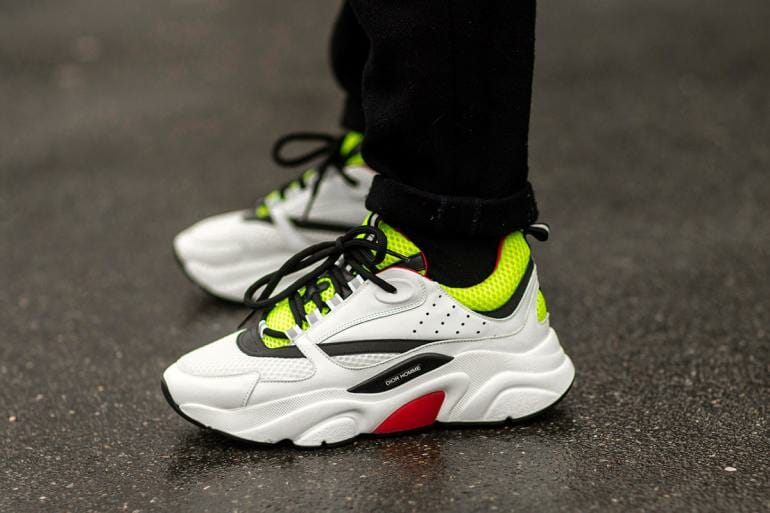 The rise of high fashion brands producing their own sneaker silhouettes is also rapidly developing. It arguably started with Balenciaga producing both the Speed Runner and the Triple S, however now even more brands have decided to jump on the bandwagon. Prada have just launched the Cloud Bust, which in the month or so that it’s been available has seen unprecedented success, and even Gucci and Dior have launched athletic looking runner style sneakers.

Let’s not forget the insane hype behind Virgil Abloh’s Off-White x Nike collection either, this season they’ve been absolutely everywhere, including every fashion week that’s happened so far. Nike’s “OFF CAMPUS” event that hosted the launch of the sneakers actually took place on the same week as New York Fashion Week, and much of the attention that should’ve been on fashion week was instead diverted to the Off Campus event instead. It just goes to show the power that sneakers have over the consumer. 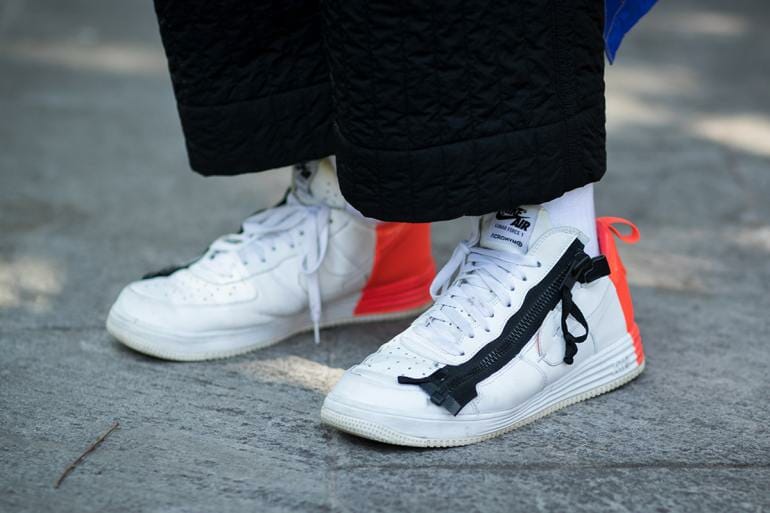 It’s a no brainer that sneakers are only going to become more involved with the runway that they already are. Sneakers are simply evolving and becoming more popular by the day, and fashion houses have already started clocking onto this. We’re unsure if brands such as Nike or adidas will ever hold their own runway shows, but you can certainly expect to see more of sneaker brands during fashion shows. If you’re interested in fashion, no doubt you’ve already clocked this going on, maybe subconsciously. From now, keep an eye on what models are wearing down the runway. We wouldn’t be surprised if sneakers start to completely outnumber formal styles on the catwalk.

Where to buy a pair of Sneakers