101 Haikyuu Tattoo Ideas That Will Blow Your Mind! 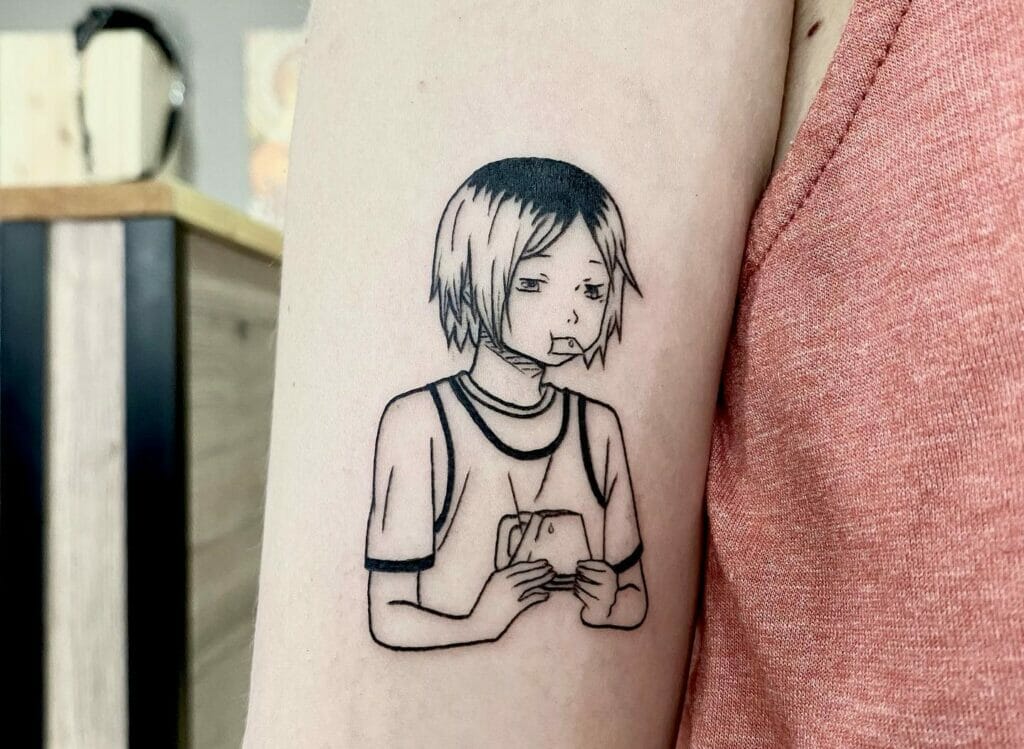 A fan of the amazing Haikyuu manga series and want to show off your love? We have some fantastic Haikyuu tattoo ideas perfect for you!

Haikyuu is an amazing Japanese manga that has gained a lot of love and appreciation from its fans.

The story of Haikyuu is of a young boy called Shoyo Hinata, who wants to become a great volleyball player even though he has a small stature. This story started off as a Japanese manga, but then it became an anime television series in April 2014.

After the first season of the show became extremely popular, it was renewed for a few more seasons and its 4th season aired in 2020. The show is a perfect mixture of several genres like drama, romance, comedy, and action. Each character has been designed so perfectly, that you will be able to relate to each and every character. The manga has a lot of characters and a beautiful coming-of-age story. The manga series is so popular that it has a cult following. There are some characters in the series that are much loved by the audience, and one of them is Shoyo Hinata. The love for this series spread like wildfire, and soon there were so many people getting tattoos of characters from the anime. Over the years that have been several tattoo artists who have created some beautiful designs of the characters that look extremely realistic.

If you are one of those people who have an extreme love for this show and want to show it off with some beautiful tattoos, then do not worry. We have curated a list of some amazing Haikyuu tattoo designs that will definitely appeal to you. You can select your favorite design after going through this list and make your next tattoo now!

Kenma Kozume is a very popular character from the Japanese manga series Haikyuu. Ken is a serious second-year student who studies at Nekoma High. He is a very favored character and was referred to as the heart and brain of his volleyball team as the team setter. His analytical and composed personality has made him a fan favorite. His skills in volleyball are considered extraordinary and he is an idol for a lot of children.

Ken has a huge fan following and there are a lot of people who have gotten his tattoos on themselves. This particular tattoo is a portrait of Ken made entirely in black ink. The artist has used fine line work for the border of this design and within it, they have added solid black color. The strokes and composition of the design are such that it appears similar to the actual Japanese manga character. If you are a fan of Ken, then what are you waiting for? This is your design.

The entire Japanese manga Haikyuu revolves around the main protagonist of the story, who is Shoyo Hinata. For the most part of the series, Hinata was a student who studied in the first year of Karasuno High. Despite his short stature, he is on the school’s volleyball team and plays as the middle blocker. He has a very energetic and cheerful personality and is easily lovable by everybody. The character has a beautiful balance of emotions because despite having a cheerful exterior, Hinata also has a serious attitude when it comes to his favorite sport, volleyball. Since he is also the main protagonist, he is very easily the favorite character of anybody who has ever read the series.

This particular tattoo is a very sweet design, showing Hinata eating something looking clueless, just like his character. The artist has used fine line walk on the border of the design and has used dot-work art for the inside. Each stroke is extremely intricate and adds to the element of the design. The entire tattoo has been made in black color and if you wish you can add colors to it. This tattoo is the perfect way to show your love for Shoyo Hinata.

If you’ve ever read the Japanese manga series, you will understand this tattoo better than anybody else. This design is from the comic book, just like it was originally published. It shows a moment from a volleyball match between show Shoyo Hinata and another player, and the dialogue box on the right says ‘we are the protagonists of the world’.

The tattoo artist has done a very clean job with this design. They have tried their best to create an exact replica of the comic book with each stroke very intricately put. The artist has used only black ink for the design which makes it look appealing.

This is another tattoo of Shoyo Hinata. This is a very sweet and simple design. It shows the portrait of Hinata in a very straightforward manner. The tattoo artist has used a fine line walk of black ink for the outskirts of the design for the hair they’ve added dot work art in black ink to give it a realistic effect. The rest of the area has been done with solid black ink as well. This tattoo may look extremely detailed. However, it is simple and subtle and may not have taken more than one sitting to complete. This is a customizable tattoo and you can get a bigger or a smaller version of this tattoo on any area of the body.

Kei Tsukishima is another first-year student from Karasuno High. He is on the volleyball team at the school and plays as the middle blocker, just like Shoyo Hinata. He appears to be a skinny and tall student who always has a smug smirk on his face. He has a very blunt personality and sometimes gets in fights with his own teammates as well as the teammates of the rivals.

His personality may not be liked by all, but he also has a huge fan following. This particular tattoo is made with black ink. The tattoo artist has made the entire design with a black outline. It is a sweet and simple tattoo and will perfectly show off your love for the manga series.

This tattoo is of Tobio Kageyama who is a secondary character in the series. For the most part of the series, he is portrayed as a student in the first year of Karasuno High School. He’s part of the volleyball club at the school and plays as the starting setter. He is one of the characters with an amazing arc because initially he was shown as an arrogant and short-tempered boy, but after joining the high school he became more respectful and accepting. This is the reason why he is a much-loved character. The tattoo artist has done a great job in the detailing of the design. They’ve used both techniques of fine line work and dot work art for this tattoo. The entire design has been made in black ink and in certain areas white color has been used to highlight.

Yū Nishinoya is another very popular character in the series. He is a member of the volleyball team alongside Shoyo Hinata and has remarkable skills. His character is portrayed as fearless and confident, and he does not shy away from problems.

This is a very simple and beautiful design of the character the tattoo artist has tried to recreate it exactly from the comic book with Fine Line Walk and Dot work art of black Ink. This is a small design and perfect for your next anime tattoo.

When the character of Tetsurō Kuroo was introduced, he was the captain of the volleyball team at Nekoma High. His character was considered the provocation expert by many of his teammates and others as well. When he is around his teammates, he is considered a responsible captain who lifts the spirits of his team members. This is one of the cleanest and finest tattoos you will find online. The tattoo artist has used solid black color to make the entire design and in certain areas, they have used dot work art as well. This design is something that you can show off.

This is another very sweet and simple tattoo of Shoyo Hinata. The tattoo artist has done great detailing in this design. Used black ink for the border of the tattoo. For the hair, they have used dot work art of grey ink. To highlight certain areas like water droplets around the face and the teeth or the wrinkles in his shirt, the artist has used white ink. This is a very small tattoo that has been placed on the arm. You can add colors to this design as I wish and place them on any part of the body since it is a customizable design.

This sweet and simple tattoo is of Shoyo Hinata, who is the protagonist of the series. The tattoo artist has made the entire design a black and white portrait. They’ve used shades of black and grey to complete this design. The accuracy of this tattoo is such that it appears to be straight out of the series with every detail and amazing intricate strokes. If you were a fan of the Haikyuu series, then you should definitely consider this for your next tattoo.

Not many people are comfortable with the idea of getting a portrait tattoo of your favorite character on their body because it requires a lot of commitment. If you are skeptical about the design, you can go for a temporary tattoo and then convert it into a permanent one later. We hope that you liked the Haikyuu tattoo ideas above, and if you want to explore further, you can search and check out –

What is the Haikyuu tattoo?

The Haikyuu tattoo is a popular trend among fans of the manga and anime series, Haikyuu!!. It consists of two symbols: a volleyball surrounded by stars, representing the sport and its passionate players, and a lion head, symbolizing strength and determination. The tattoo reflects the spirit of Haikyuu!! and celebrates the friendship and camaraderie between the characters in the story. The tattoo is also an homage to the series itself, as it was created with a lot of love and dedication to bring out its best qualities. Fans also view it as a way of showing their support and loyalty for their favorite show. Many fans choose to get this tattoo on their arm or leg, but it can be placed anywhere on the body. The tattoo has become a great way to show your love for Haikyuu!! and its characters!

How much does the Haikyuu tattoo cost?

The cost of getting a Haikyuu tattoo varies depending on the size and complexity of the design, as well as the location of the tattoo. Generally speaking, a small-sized tattoo can range anywhere from $50 to $150 while larger designs may cost up to $500 or more. The price also depends on the skill level of the tattoo artist, so it’s important to find a reputable and experienced one who can do the job properly. Additionally, some shops may offer discounts or promotions for getting multiple tattoos at once. Prices may also differ depending on where you live, so it’s best to contact your local tattoo shop for more accurate pricing information.