A Guide For Men’s Funeral Attire 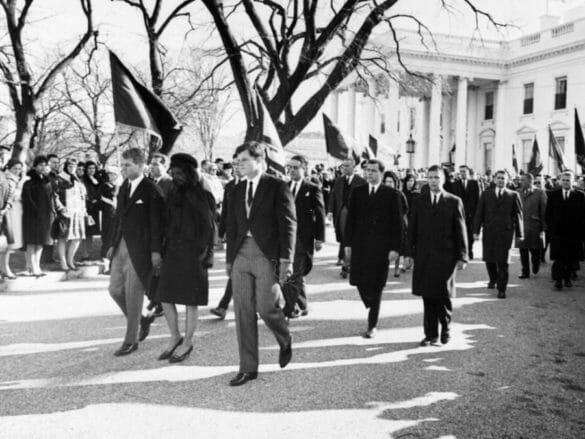 Life requires suits for many occasions, while usually joyous, there comes a time when you have to say good-bye to a friend or relative. It’s hard dragging the funeral suit out of your closet, but for those services where you need a respectful look keep reading for our guide on men’s funeral attire.

Bringing up the subject of death leaves many of us discomforted. Mourning the loss of a loved one brings on the realisation that our own lives are so short. Death also holds question, and it is this element of the unknown that has created intricate ceremonies from religion to religion and throughout ancient history. The thought of afterlife crosses all religions and ethnicities. While some cultures celebrate their passed ancestry with yearly festivities, others only mourn during the funeral and a period time after.

Within these rituals and practices, the one area that cannot be overlooked is attire for all—family, friends and acquaintances. Wearing just one wrong colour could mean crossing the line of mourning to disrespect. Funerals are the one time you don’t want to make a style statement or appear overly done up.

Cultural diversity is a giant proponent of our society and lives, we have loved ones from everywhere and every background. Taking into account five major world religions, we examine how men should dress for funerals, so you never have to feel unsure of how to appear.

A Catholic or Protestant Funeral

There are three main events that generally come with Catholic and Protestant Christian funerals: wake or visitation, the memorial service and burial. Men’s funeral attire should stay the same across all events even though visitations are sometimes viewed as more personal and private. It’s safest to dress similar for anything you attend that is put together by the family of the deceased.

What to wear to a Catholic or Protestant funeral:

For Jewish funerals, you will likely attend a service at the funeral home or a synagogue. You may just attend the burial and mourning events after. Shiva is a period following the burial in which you may visit the family in their home where prayer services are held three times throughout the day.

What to wear to a Jewish funeral: 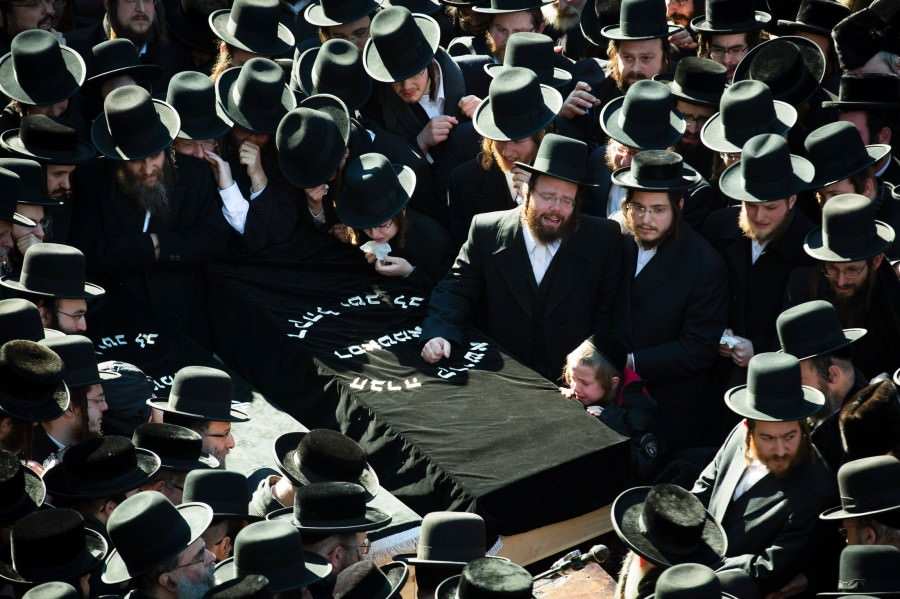 What men should wear to Hindu funerals is the opposite of the formal funeral suit. Hindu funerals events include: a visitation or wake, cremation ceremony and a reception. As with all religions there may be variation amongst families, but traditionally the rites are similar.

What to wear to a Hindu funeral: 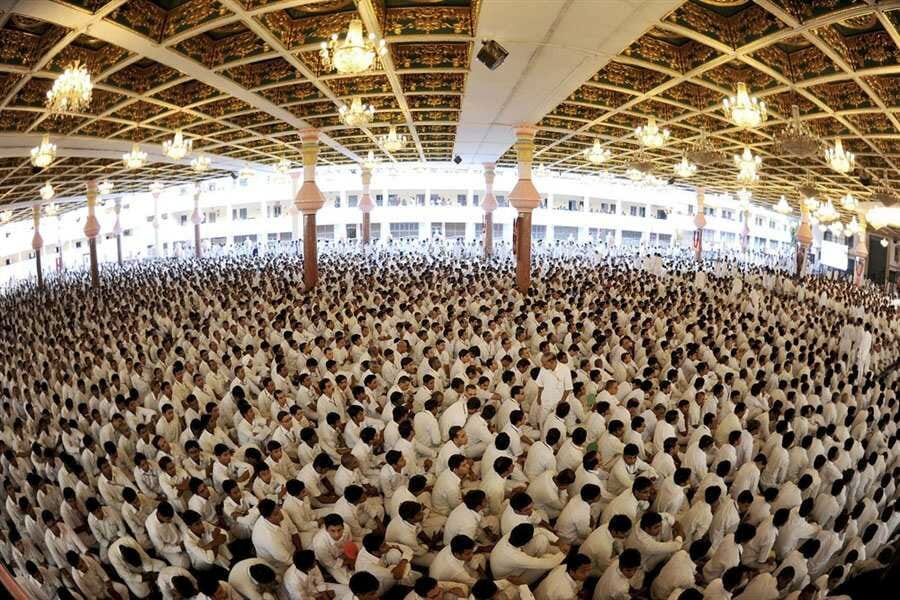 For Muslim funerals there will be no visitation period. For the funeral, prayer service is held at a mosque. For the burial, traditional customs only allow men to attend. After the burial there is a reception for visitors to give their condolences to the family.

What to wear to a Muslim funeral:

Buddhist customs vary between Asian countries and ethnicities. There’s marked differences between Japanese Buddhist funerals and those of South East Asian descent.  When funeral services are held are based on the various countries. Several events are done between the family’s home and temples over a few weeks up to 100 days. Ultimately, there will be a wake or visitation, funeral then cremation or burial.

What to wear to a Buddhist Funeral: 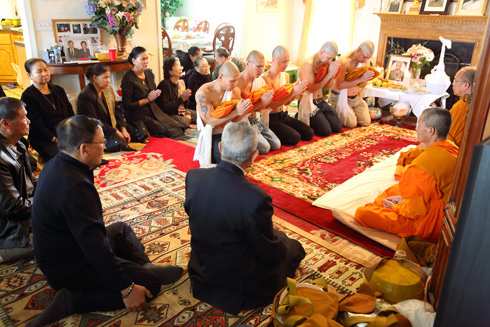 A Historical View of Funeral Rites and Customs

Let’s take a look at three past civilizations for interesting rites of passage and attire that we can still see hints of today, even though some have carried through more heavily than others. We don’t want to bore you with a long lecture that reminds you of your school days, so we’ll keep it short and sweet.

A civilization brimming with mystery and speculation, let us look at the funeral rituals and attire of Ancient Egypt. Mummification has brought fascination and wonder to the world, but what of the actual ceremony? Examining the Book of the Dead gives insight into the aspects of death and afterlife.

Symbolic rituals, items and people are drawn out into scenes that leave us hints of funeral processes. There’s so much depth to the rites and prayers to the ancient gods that this article could go on forever, but it would turn this article into a lengthy novel. We do know from archaeological evidence that mourners during the ceremonies wore white. Some imagery depicts gold accents.

Depending on what era of Ancient Egypt, the length and styles of men’s kilts changed, but white remains the prominent colour.

Chinese funeral rituals were an intricate process of burning of material goods and foods to send with the soul and the burying of items in the tomb. The extravagance of what would be buried with the deceased was based on wealth.

The most famous that has been the inspiration for documentaries and movies, is the tomb of Qin Shi Huang. China’s first emperor’s grave is surrounded by an entire army of sculpted soldiers referred to as the Terracotta Army. First found in the 1970s, this expansive figurine community contained everything from entertainers to weaponry and horse-drawn chariots. A grandiose scene to accompany the emperor into his afterlife. As for the attire, mourning clothes were white, which you still see in traditional funeral services presently.

Just as it was with China, Ancient Rome funeral practices were based on status and wealth. Here is where we see the beginnings of the visitation or wake customs; deceased were displayed before a the funeral procession to an area for cremation. The rule was as follows the richer, the longer the wake, and for the poor maybe a day at most.

With musicians leading the procession to a cremation pyre, mourners would follow with masks of ancestors of the family. A society that believed heavily in the afterlife and the ancestors for providing the life of the living, these masks were vital to funeral attire. Artifacts of funeral imagery shows the layered togas of men and women, many of them in black as pictured below. 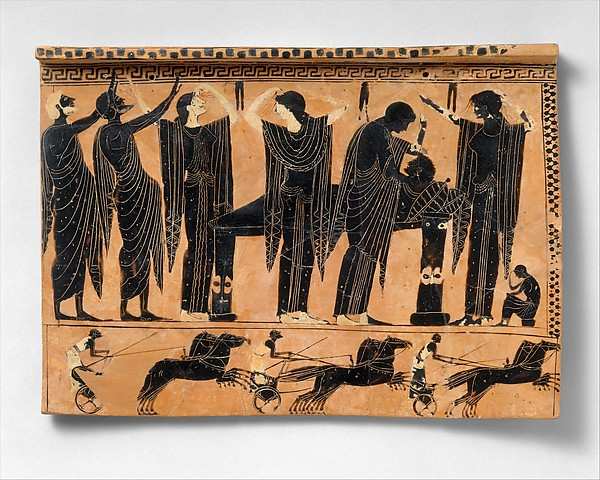 While some customs have been revamped since their past and others are fairly new, the ideals of respect for those who’ve passed before us will never change. While we ourselves may not be ready to face the subject of death, we understand that time won’t stop for anyone.

If you still feel unsure what should be worn, you can always ring ahead to the place where memorial services will be held and ask. Generally, all places will be able to tell you the respectable clothing required. If this isn’t a possibility, it’s okay to actually ask the family members putting together the funeral events.