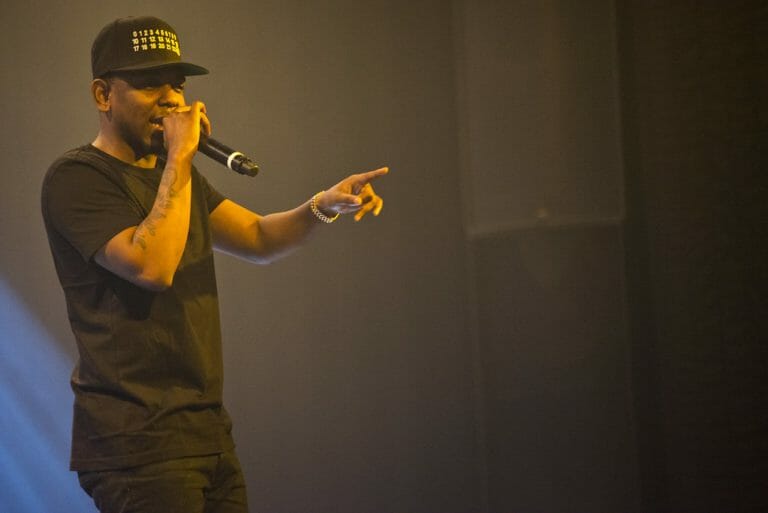 Sure, we’re all into his music right now, but Kendrick Lamar’s style is definitely worthy of a little extra attention. His look is synonymous with understated cool, with old-school streetwear subtleties gaining universal kudos from both the music and fashion worlds. We pick apart Kendrick’s understated aesthetic to show how you can easily steal his style.

More often than not, the world of rap and hip-hop seems all-consumed with expensive chains, flashy clothing and even flashier trainers. And yet Kendrick stands out – by not standing out. Much like his straightforward and honest lyricism, Kendrick’s style has no gimmicks, and is a lot more humble (as the song goes) than that of his rivals.

Authentically talented and filled with quality substance rather than the gaudy opulence of rival artists, Kendrick’s wardrobe revolves around accessible and relatable streetwear – staying true to his street Compton roots.

There’s no doubt about it, Kendrick’s sartorial choices are definitely influenced from the street, but that’s not to say that he doesn’t have style icons himself. The 29 year old has cited Kanye West as a style influencer on many an occasion. Love him or loath him, Kanye has blazed a trail in opening up the possibility of super successful fashion lines to the music world – so it’s no wonder that Kendrick wants a piece of the action.

But where Kanye’s style choices can often be somewhat questionable, King Kendrick reigns supreme in the art of keeping it simple. Mainly spotted in a simple t-shirt and jeans combo, Kendrick has mastered sartorial subtleties with this transitional look – straight from the street, to the stage.

If there’s one item of clothing that Kendrick rocks more than anything, it’s the t-shirt. Simple, subtle styling of this everyday wardrobe staple can speak a lot louder than you may think. Keeping his t-shirts slim fitting in the body, Kendrick’s aesthetic is sleeker than the massively oversized t-shirts often worn by rappers. Opting for t-shirts that are slightly longer in the body, Kendrick still has that iconic street look, but without taking the trend to the same lengths as the likes of Bieber, for example.

While the rapper mostly favours plain t-shirt styles, Kendrick isn’t one to shy away from jazzing it up a little – after all, with such a paired back style he can definitely afford it. Plain tees are swapped for graphic printed t-shirts, with slogans often preferred over loud branding. Kendrick is also one of the many celebrities to jump on the band merchandise tee trend, and is often seen wearing a t-shirt branded with his 2017 album title ‘DAMN’ – now that’s advertising.

While wiping your wardrobe of colour completely might not be advisable, we can definitely take a leaf out of Kendrick’s tonal colour palette. Mirroring his paired back musical ethos, Kendrick is most often seen in a steady selection of muted greys, whites and blacks.

Where rappers usually adopt the ‘more is more’ approach with colour, Kendrick’s style stands out as clean and well thought-through, albeit subtle. Far from dull, tonal palettes are actually really versatile, as you can mix and match items safe in the knowledge that there’s going to be no questionable colour clashing. This is a really easy way to streamline everyday dressing while keeping up those style points. Good thinking Kendrick.

Chances are that comfort is a huge factor in your wardrobe. We don’t need to tell you that trainers are undoubtedly the most popular choice of footwear at the moment, and Kendrick definitely seconds that. Kendrick Lamar is actually an avid sneaker collector – according to the man himself, he has “probably, roughly, about 300 pairs. That’s a lot of shoes.”

And he’s put his years of trainer knowledge to good use, designing several collections for sportswear giant Reebok, heavily influenced by his street origins in LA. Get Kendrick’s style by pairing a snazzy pair of kicks with distressed jeans and a crew neck for a simple and effortlessly cool look. Keep your outfit simple and let your trainers do the talking.

While streetwear is all about keeping it simple, Kendrick is all for adding a statement piece to spice up an outfit. A jacket is probably the easiest way to add a bit of interest to an otherwise understated look. Kendrick Lamar often goes for a patterned bomber or in a contrasting material to bring the styling details.

You might be thinking that there’s only so many times you can wear a statement jacket before people have you down as an outfit repeater, but a statement jacket is actually super versatile. A statement jacket will transform your trusty favourite outfit or updated basics to give you a new, fresh look every time. While you can be as daring as you want with a statement jacket, stick to a wearable colour palette such as navy and black like Kendrick does, so that you’re guaranteed to get a good amount of wear from it.

Wearing several brands in one outfit, (otherwise known as cross branding) seems to be the ultimate rule in the nu-lad sartorial guidebook at the moment. It’s very much a case of the more the merrier in the style stakes when it comes to wearing brands. Rappers are no different, and it’s generally a case of the bigger the logo, the better. But not for Kendrick Lamar.

Kendrick reportedly said that wearing more than one brand at once is a huge “no-go”. So take a leaf from his book and stick to one logo at a time. A simple grey crewneck with a chest logo is probably the most wearable way of incorporating a logo into your outfit while sticking to Kendrick’s subtle style. Statement trainers are also a great way to show off your favourite brand. Kendrick Lamar is obviously mostly seen wearing reebok, but any crisp pair of white trainers will add a clean aesthetic to a streetwear look.

While streetwear reigns supreme in Kendrick’s wardrobe, it’s not always appropriate for smarter occasions like you know, meeting the President or anything. Ever the style chameleon, Kendrick has also managed to master the effortless Scandinavian look for smarter occasions, without compromising his stylistic authenticity.

Slightly cropped, wide-legged trousers are a great middle ground between casual streetwear and a more formal look. Worn with a minimal crew neck sweatshirt, the look hits just the right notes, keeping a clean aesthetic but sticking to Kendrick’s street roots with subtle nods to skate styling. Kendrick is also one for experimenting with different styles of denim jeans – swapping out baggier, distressed styles for more slim, darker tones for a smarter look.

Kendrick Lamar is the undisputed king of the rap at the moment, and his style game isn’t too far behind. His understated look backs up his authentic, down to earth musical ethos and just goes to show what a ‘humble‘ guy he is (if you excuse the pun). Keep your look simple with subtle nods to the street and you’ll be on your way to stealing Kendrick’s style.