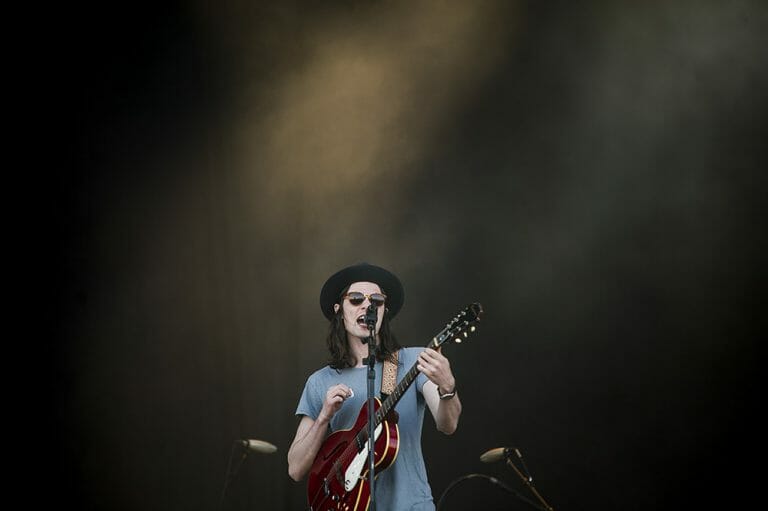 James Bay is the epitome of contemporary rock star styling. Long locks, skinny jeans and that iconic fedora hat, Bay has become an icon in his own right. It’s a strong look, but one that is easy to recreate for wannabe indie rock n rollers.

Quite literally for as long as we can remember, the front men of rock have been at the fore of style, famed and infamous for their anti-establishment and rebellious looks. From Mick Jagger to Alex Turner, rock has had its fair share of stylish men, but arguably the most contemporary has to be James Bay.

Like all good stars, Bay has his trademark – if you don’t know what it is, you’ve probably never seen a photo of him. The hat has almost become synonymous with James Bay himself, and while it’s earned him plenty of style credentials, it’s easy to overlook that the rest of his outfit is always on point. We take a look at James Bay’s iconic staples and show you how you can nail the rock star thing too.

Okay, so we couldn’t start without first addressing the obvious. James Bay’s fedora hat is something of myth and legend at this point. Granted, it might be a required taste and take some balls to pull off, but if you get it right then there are some serious style points up for grabs. You’d be forgiven for thinking that the occasions for wearing a fedora hat are somewhat limited. And yet James Bay always manages to find a time and a place for his fedora – in fact, we’re not 100% sure what James Bay looks like without a hat?

We’d usually say to approach a fedora hat with extreme caution and stick to wearing it with a collared shirt for a smart casual look. Yet Bay seems to defy all fedora related taboos by wearing it with literally everything. T-shirts, crew neck jumpers, tuxedo shirts – you name it, James Bay has worn a fedora with it. Adopt his devil-may-care attitude and try a fedora with a simple t-shirt and jeans combo, but stick to dark tones throughout your outfit for a more wearable look that’ll help you avoid the inevitable comments from your mates.

Besides the fedora hat, there’s another key element to James Bay’s outfit repertoire that he is rarely seen without – his black skinny jeans. Seemingly a quintessential item in making a rock star’s wardrobe, the skinny jean has long been favoured by indie guys like James Bay. Granted, his skinny frame definitely makes pulling off the style a lot easier, but that’s not to say you can’t make it work.

Stick to black or grey skinny jeans like James, as they will go well with most outfits and are also more slimming. Take leaf out of James’ book, and note that he never wears light coloured skinny jeans. They’re a lot less forgiving of gig stains and are definitely more TOWIE than edgy rocker. If you’re a bigger guy, probably avoid this one and go for a slim leg instead – you’ll get the same look but with less chances of chaffing.

Now, a pair of fresh trainers just wouldn’t work with James Bay’s indie, nonchalant aesthetic would it. Bay is a huge fan of the Chelsea boot and is more often than not pictured wearing them in some shape or form. Whether it’s a classic leather style for smarter occasions or a soft suede for more casual gigs, the Chelsea boot is definitely James Bay’s go-to footwear. Black might seem like the obvious choice, but mixing an outfit up with a burgundy or brown Chelsea boot gives a nice added detail.

While we’d usually say ‘make sure you treat your suede boots with protector’, the rules do not apply here (I mean, it is rock and roll after all). James Bay shows us how to rock the worn-in look, which only adds to his cool points. There’s definitely a time and a place for super scuffed Chelsea boots though – think the pub at the weekend, rather than the office.

Well, you can’t dress full indie rocker all the time. Some occasions call for something a bit smarter. You might not have any big award ceremonies to go to, but there’s always an occasion for a suit. But rather than your average suit, James Bay has a penchant for a tuxedo – a slight nod to the alternative but sticking to the dress code. Sometimes the rock n roll in us has to be tamed.

Follow suit of James and opt for an ultra-slim style, sticking to the skinny aesthetics that James Bay, and indeed a whole host of rock stars, have become renowned for. Wear with polished brogues or Chelsea boots for a clean look, and make sure you tame those rebellious locks.

Much like the skinny jeans, a leather jacket is a staple piece in any rocker’s wardrobe. We probably have the likes of the Ramones to thank for that. James Bay often goes for more embellished leather jackets, with several zips, buckles, and a bit of quilting here and there for full rocker effect.

If you’re wearing a jacket with black skinny jeans, try layering it over a contrasting t-shirt and an open shirt too add interest to the look and tone down the full on Hell’s Angels look. A leather jacket is actually really versatile and will add a bit of edge to a smarter outfit – but stick to a black colour, as it’s timeless and a lot more wearable. If a leather jacket is a bit too harsh for you, look to James Bay’s collection of brown suede Sherpa jackets – again, as James goes to show, it’s really versatile, but maybe one to keep for winter.

The humble shirt makes a huge statement in James Bay’s wardrobe. Whether he’s wearing it open over a contrasting t-shirt or fully buttoned up, opting for a snazzy print adds interest to the most casual outfits. While a Hawaiian floral shirt might be a bit too much for you, there are easier ways to pull off the look.

Most often, James Bay opts for a variation on floral but keeps the colours muted. Tones of grey, off-white and burgundy work well alongside the darker colours that James tends to wear, without being too loud. If you’re not into the statement shirt thing, play with textures like corduroy or velvet, as often seen on James Bay, for a more subtle take on the trend.

On On That Note

James Bay is a classic indie rock and roll type. A leather jacket, black skinny jeans and the all important fedora hat and you’ve got the look nailed. His style is actually really wearable, and you’ve probably already got half a wardrobe full of James Bay-esque clobber. If the statement hat isn’t for you (and it’s definitely not a look for everyone), just ditch it. There are no rules in rock and roll after all.