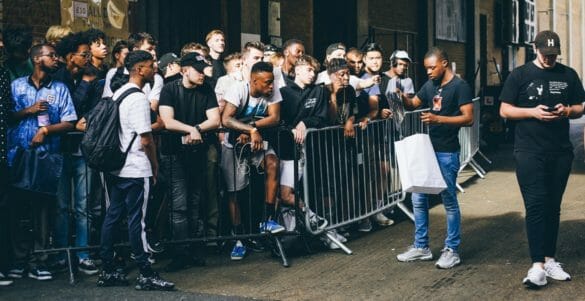 Sneakerheads are everywhere in this day and age, if you’re into fashion or care about the way you look at all, no doubt you’ve got a personal preference when it comes to what’s on your feet. However it’s such a diverse term, we thought we’d take a look into the different types of sneakerheads out there.

The term “sneakerhead” used to describe one type of subculture, the guys who collected the latest Air Jordan’s and Nike Air Force 1’s. It was a very niche crowd and wasn’t a big thing. However, in the present day this has all changed. With streetwear culture becoming somewhat mainstream, and kids of the age of thirteen or fourteen becoming interested in fashion, whole new sub-genres of sneakerheads have been born. We’re going to take a look at these different types and guide you through what each stereotype (for want of a better term) consists of.

The “Hypebeast” sneakerhead is without a doubt the most common type of sneakerhead you’ll find on the scene today. Originally, they were most likely a streetwear kid. They discovered Supreme, Palace and Bape among others, then this moved onto Gucci, Goyard, and basically anything expensive. They can’t really string a solid outfit together, it just consists of anything that costs a lot. No one really knows where they get their money from, as they never appear to be at work, but they seem to have tonnes of it.

This is the guy who’s been around “since way back”. If it’s not classic, you won’t catch him wearing it. His favourite sneakers are no doubt Air Max 1’s, Air Force 1’s and any Air Jordan. You definitely won’t see him sporting a pair of ripped skinny jeans and Yeezy Boost’s. Selvedge denim or wide leg cargo pants are an essential to match with his classic sneaker collection, and would his outfit really be complete without a New Era cap? This guy will also never hesitate to give you a lecture on how “the scene’s changed” and “it’s not like it used to be before all these kids jumped on the hype”.

If it hasn’t got Kanye’s name on it, he’s not wearing it. Boost is love, Boost is life. You probably won’t catch him in a pair of Nike Air Yeezy’s either, either because he wasn’t aware they existed as his knowledge only spans back to 2014, or simply because, well, where’s the Boost? This guy pairs his Yeezy’s with a pair of skinny ripped denim, a longline tee by Fear of God and most likely a Yeezy Season jacket. His outfit definitely costs more than a top of the range Macbook, and he’s also likely to be under the age of 18. Once again, no one knows exactly where his money comes from, but trust fund springs to mind.

A lot of these categories come dangerously close to each other, mainly due to the fact that everything they wear is obscenely expensive. However there are clear differences. This dude won’t be seen in anything that isn’t designer. His footwear collection consists of Balenciaga Sock Runners, Gucci Ace’s and Margiela’s. Does he really like them? Is it just a competition of who’s outfit cost the most? I guess we’ll never know.

He doesn’t even like sneakers. He just likes money. Actual sneakerheads hate him, without a doubt he cops at least 5 pairs of every Yeezy that drops, and makes a total killing. Generally this type of sneakerhead lacks any sort of style, they may occasionally rock a pair of the sneakers they’ve got their hands on, with the pairs of jeans their Mum bought them when they were 16. We’re unsure if they’re total geniuses or just selfish, but either way you can’t knock the hustle.