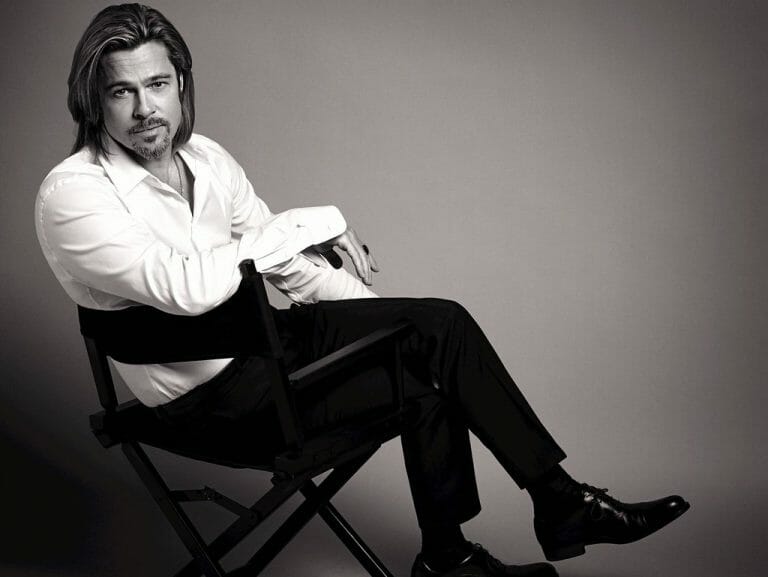 Best known for his role as the infamous Tyler Durden, Brad Pitt is undeniably one of Hollywood’s most stylish actors. With the release of his latest film Allied, in cinemas now, we take a look at some of his most fashionable outfits.

Despite what he may look like in some of his films, Pitt maintains a subtle casual aesthetic when he is out and about. Although he is known for having an unhealthy obsession with fedoras, as long as you can ignore that then his style is actually relatively easy to get down. Try a light T-shirt and chino combo for a nice summer look, or pair an overcoat with some jeans to stay warm during winter.

Although Pitt is famous for his versatile range of roles, he is often drawn to the epic setting of war. Whether he’s playing the notorious Nazi hunter, Aldo Raine, in Inglorious Basterds, or the commander of a tank in Fury, the character of a man at war seems to fascinate him.

Brad Pitt’s new movie, Allied, follows an intelligence spy known as Max Vatan (Pitt) who meets Marianne Beauséjour, a member of the French Resistance . After beginning a relationship together Max is forced to question whether or not he can really trust his new wife.

Despite the tensions of war-time espionage, the style of the characters within the film remains impeccable. After all, we’re not here to talk about trivial things like the turbulent relationship of two Second World War spies. What they’re wearing is much more important.

Staying formal in warm conditions can be tricky, so getting your hands on a lightweight suit or sports jacket is a great way to look smart whilst remaining cool. Pair it with an Oxford shirt and some loafers to dress the look up, or If you’d like to modernise your style then why not try wearing a polo shirt underneath.

Whether your James Bond or Max Vatan, no spy’s wardrobe would be complete without a tuxedo. Although wearing a fresh suit whilst taking out bad guys is pretty cool we’re not expecting you to become a trained spy. However, dressing like one can be perfect for any fancy parties that you’ve got coming up.

For a more smart casual look get your hands on a tan suede jacket. Other than generally looking good, this piece also brings an extra dimension of colour that you might not expect from some outerwear. Team it with some grey trousers and a jumper for a look that is relaxed and smart.

Quentin Tarantino’s 2009 film, Inglorious Basterds, redefined the war genre in an over the top and hyperrealistic way. Pitt’s portrayal of the infamous Aldo Raine is both hilarious and brutally unhinged. Despite the rough edges, there are many fashionable elements to this characters look. Just ignore the knife and you should be alright.

Traditionally a military jacket, the peacoat has become one of the staples of men’s winter fashion. Teaming one with some khaki work pants and some heavy duty boots is an excellent way to modernise a classic military style.

Arguably Pitt’s most famous performance is that of Tyler Durden in Fight Club. As this smooth talking character, Tyler is supposed to embody everything a man wants to be. Although this may have been true in the 90s, there probably aren’t many men who would still wear that iconic red leather jacket. It’s therefore a better idea to simply take inspiration from this confidently stylish look.

Unless you’re going to a Halloween party it’s probably better to take inspiration from this iconic performance, rather than trying to emulate it. Pair a leather jacket with a patterned shirt and some casual trousers for a confident style.

Out of all the Brad Pitt films, his portrayal of Jesse James is one of his less famous roles. Yet, despite this, it is arguably one of his most fashionable characters to date. Although the film is a western set in the past there are many style choices that translate perfectly to the modern day.

For a modern day hipster look that gives off a great smart casual vibe get your hands on a grandad collar shirt and a dark waistcoat. Although it may not seem like much, the unique collar style actually brings a huge amount of detail to the look. During the winter months layer the look with a long dark overcoat to maintain the more formal aesthetic.

Although many of his films are set in the past it’s not hard to modernise Pitt’s outfits. For a formal look wear a casual suit or  tuxedo. Both look extremely stylish, you just have to decide when to wear them. For a smart casual look try mixing things up with some jumpers and outerwear jackets. Take some confident inspiration from Fight Club and experiment with leather jackets and patterned shirts. Just remember to be open and experimental and you’ll have a great outfit in no time.

Joanna Johnston, the costume designer for Allied, has excellently captured the classic 1940s aesthetic whilst maintaining a fresh and contemporary feel. When you see that she has worked on films such as Forest Gump, Back to The Future II and Saving Private Ryan it’s not hard to see how Johnston achieves this.

Whether you’re looking for a fancy dress outfit, or you just want to take some style inspiration from one of Hollywood’s biggest stars, we can all appreciate Pitt’s fashion taste. Fortunately for us, his wide range of roles means that there is more than enough material to base your Brad Pitt inspired outfit on. Although you don’t have to actually become a Second World War spy, it doesn’t mean you can’t look as good as one.