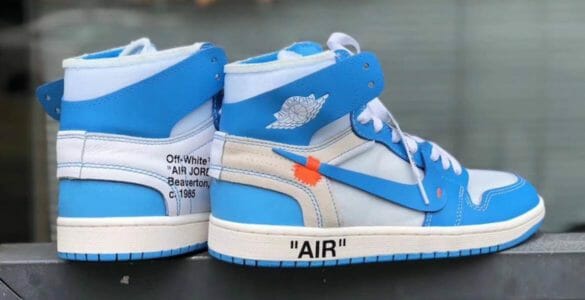 Virgil Abloh’s Off-White is seemingly unstoppable as of late. The brand doesn’t seem to be slowing down anytime soon either, with new images surfacing of another Nike collaboration. This time around it’s the Air Jordan 1 in “UNC” colours.

Slightly earlier this week we received the news that the Off-White x Converse Chuck 70, part of the original “THE TEN” was finally releasing. The Off-White hype continues this week, as late last night images of the rumoured Air Jordan 1 “UNC” version were unleashed on the internet. They’re the most detailed images we’ve seen yet, and although they’re not official, we can assure you that they’re come from a reputable source.

The sneakers are very visually similar to the two previous Off-White Air Jordan 1 releases. The only real difference seen here is the colour scheme. Before we’ve seen a Chicago inspired theme on the original collaboration, as well as a true white version. However, the colourway of choice here is reminiscent of the “UNC” Air Jordan’s we’ve seen in the past.

If you’re as keen as we are on this upcoming release, the bad news is you’re going to have to sit tight a little longer yet. There’s been no word on a release date or even an official announcement. However, we’re not doubting that this pair will release. The rumours have been circulating for a while now and these new images look more accurate than ever before. Stay locked into our blog for the latest sneaker news as it unfolds and much more.