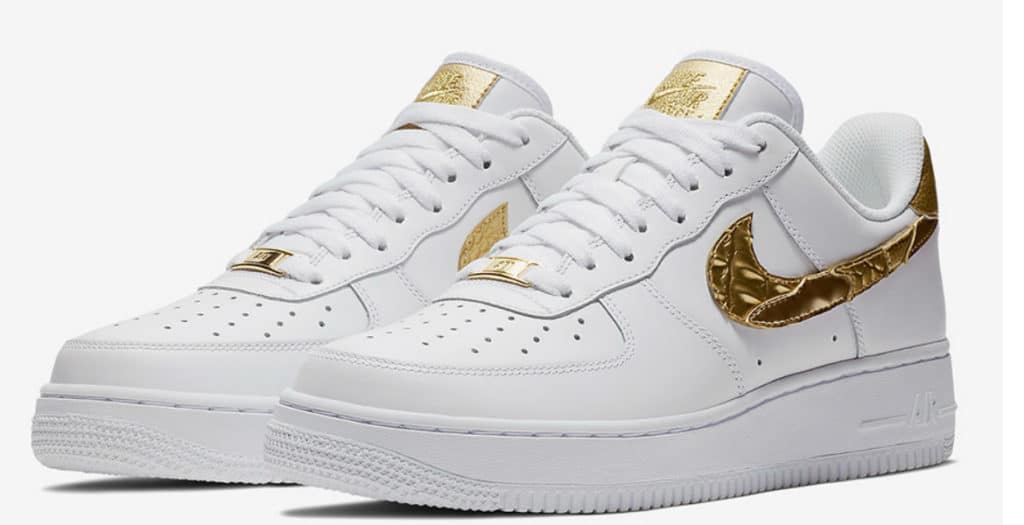 Cristiano Ronaldo is adding a second sneaker to his non-football specific footwear collection, with the incoming Nike Air Force 1 Low CR7 “Golden Patchwork”. Expected to be available in limited quantities, be sure not to miss the drop on December 7th.

Following the success of the release of his first non-football sneaker, the “Air Max 97 CR7”, Ronaldo and Nike are back again for a second go at creating a stylish sneaker. Cristiano’s previous creation was Nike’s Air Max 97 sneaker in a vibrant gold colourway, said to be inspired by his mother’s sewing skills. The story goes that whenever the young Cristiano would wear his boots out playing, his mother would patch them up. The gold featured being a reference to his now massive wealth. Featuring Ronaldo’s world famous branding as expected, the sneaker had a “CR7” on the back of the heel and insoles.

This new sneaker follows the same inspiration whilst in keeping with Nike’s classic Air Force 1. Coming in the expected Air Force 1 white, the sneaker has some grand additions to it.

Splattered in gold, the sneaker features some re-imagined details. One such example is the iconic Swoosh running along the premium leather upper of the sneaker. On the CR7 edition of this time-tested silhouette, the Swoosh is made up of gold patches, almost giving the tick a snakeskin feeling to it.

More gold is found on the heel tab and tongue tab, with “CR7” plastered across the heel in a regal gold. As well as this, the tongue tab has the expected Nike branding but in a brilliant gold instead of the usual white. Finally, in the place of the silver alloy tab usually on the laces is a gold edition.

All in all, the re-imagined colours found on this sneaker gives it a grandiose feel not usually found on the Classic Air Force 1’s.