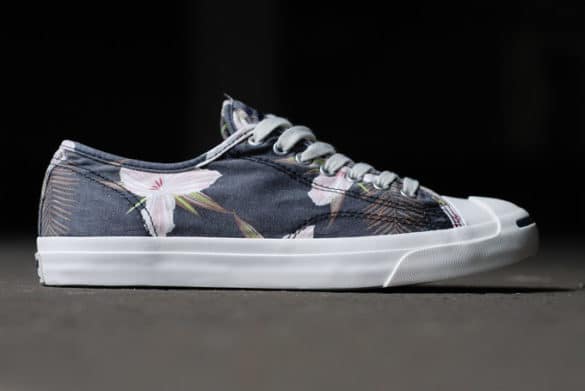 The Jack Purcell is an amazing design that everybody should own. That’s if they don’t hurt your toes because that toe bumper smiles while it hurts you like a shoe sadist when that little toe strays into the rubber. But if you’re blessed with a narrow foot you’ve got no excuse for not stacking a few pairs of this classic. Shifting units since this shoe was part of the Goodrich tyre company’s roster of rubber soled shoes, this model dropped in sporty variations with adidas-baiting stripes in the late 1960s. We mess with any shoe that Bruce Springsteen wore too.

When Converse took the Purcell licence (and there’s some great ads from the era that allude that you’ll lose your girl if you don’t wear a pair) in the early 1970s, it was a perfect fit for the company’s roster. Even after the manufacturing of this shoe exited the USA in the mid 1990s, that shape and simple formula stayed winning. There’s not a lot of badminton shoes that are instantly recognizable, but we think that a few athletes achieved immortality through their smart licensing decisions all those years ago and Jack is a prime example.

It’s all floral everything over the coming season, but we don’t think too many things take to that trend like these. Long after the floral fabrics burn out in favour of something more subdued, you can be sure that these or a flowery pair of Vans remain powerful. The slightly washed out canvas uppers and print on these Jack Purcells work perfectly together and they set off any outfit well. Well worth picking up if you’re in the market for patterns done properly

Where to buy a pair of Converse Jack Purcell