101 Best Zebra Tattoo Ideas You Have To See To Believe! 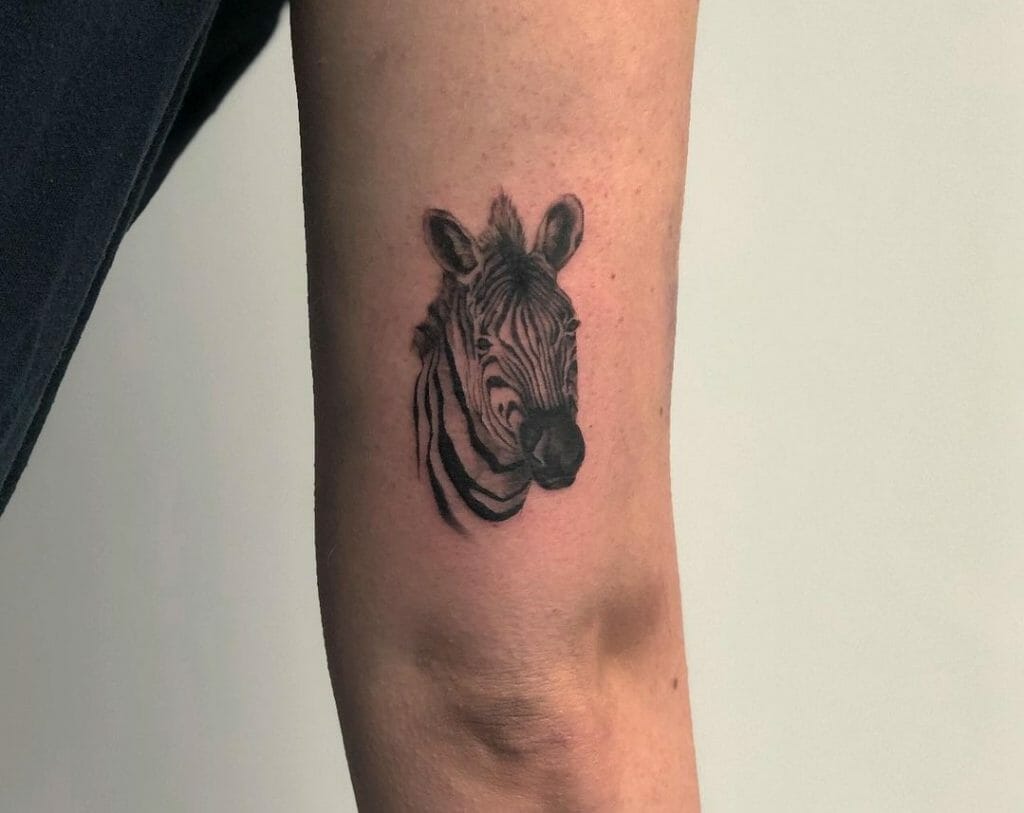 Are you interested in getting the zebra’s black and white stripes inked on your body? Then you should check out these 10 artistic zebra tattoo ideas.

Zebras are one of the most elegant animals having a beautiful coat of black and white stripes.

Zebras are grazers, i.e., they are herbivores and depend on foods like grass, plants, shrubs, and leaves. Zebras are primarily found in the savannah, shrublands, grassland, and mountainous areas of eastern and southern Africa. They’re very fast, graceful animals who are loyal to their herd. Zebras are preyed on primarily by lions. Hence these two are considered archenemies in the savannah. Zebras get along quite well with people in the countryside.

People love to adapt their zebra tattoos in their own personal ways. Zebra tattoos with geometric shapes, fine line designs, abstract or cartoon interpretations are some creative ideas. Some people may choose to pair a zebra tattoo with some other animals from the wild. Another way to truly experience such tattoos, you can consider getting a wildlife landscape tattoo along with your zebra design.

If you are interested in getting a zebra tattoo, consider these beautiful zebra tattoos for inspiration before reaching out to tattoo artists and services.

This tattoo depicts a zebra in the way it is commonly drawn. The Zebra’s stripes and tattoo outline are inked in black with a little dot shading around the edges. The “white stripes” of the zebra are depicted through the skin itself. The zebra’s tail is finely detailed and the black hooves add a nice touch this simple design ! You can place this zebra tattoo on any body part of your preference, like the wrist or arm. In this image, the tattoo is inked on the shoulder.

We all know that the seats are always made of horses in the carousels that we see in parks. But this tattoo is unique in its way, as instead of the usual horse or unicorn, this tattoo depicts a zebra as a carousel seat. The zebra tattoo has been adorned with beautiful golden jewels on the head with green ribbons flowing around him. This zebra tattoo has been inked on the person’s leg, as it is a huge tattoo. But a smaller version of this zebra tattoo can also be made on the arms or the back.

This image shows a traditional black zebra tattoo inked on the upper abdomen. Unlike most tattoos where the Zebra is standing, this tattoo indicates otherwise. The zebra is seated, with the knees bent, as if it’s resting. Around the Zebra’s rear end, it seems that it has lost its stripes, which could signify that the Zebra is a hybrid version of itself. Many artists love creating zebra tattoos, as it gives them a lot of scope for creativity.

This is an example of an arm sleeve tattoo, depicting multiple elements, such as a zebra tattoo, a giant rose along with some other flowers and leaves. Here, the tattoo artist has cleverly designed the pattern of the flower of life and leaves in the background in black and white ink, similar to the Zebra’s stripes. The design in this tattoo goes around the arm and is inked with stunning precision. The Zebra’s eye has been inked brilliantly, which makes the zebra tattoo appear very realistic.

This is an adorable zebra tattoo, where the tattoo artist has used their creativity to create a colorful zebra unlike any other. The tattoo depicts a colorfully striped zebra leaping through a ring of fire, shaded in black. This contradiction can symbolize many things, or it could be just for the fun of playing with colors instead of the same old black and white zebra tattoo.

With the blue, pink, green and purple colours around the zebra, you may mistake it for a unicorn, if not for the absence of a horn. This lovely tattoo is placed on the side of the upper thigh. But a pretty design like this can be worn on the wrist and arm as well, though you might need to adjust the size. Either way, people are bound to love and remember if you sport this zebra tattoo.

This is one of the most beautiful zebra tattoos on this list! The zebra is adorned with jewels like pearls, diamonds, and rubies. This zebra tattoo has been decorated with a bright red poppy flower to add a beautiful contrast to the whole tattoo.

The Zebra can be seen wearing a ruby and pearl headgear which contrasts perfectly with its black and white striped background. There is also some leaf detailing in green at the sides of this zebra tattoo. This zebra tattoo is a huge sleeve tattoo and covers most of the inner forearm. The jewellery and flowers together make this zebra tattoo look extremely elegant.

This is an example of a small dotwork zebra tattoo, where artists ink a tattoo by making a small cluster of dots for shading or line detailing instead of straight connected lines. This effect gives the tattoo a very different feel from the regular ones. Other than the frame in the background, the zebra does not have an outline and is drawn only with dot work and shading.

In this zebra tattoo, the Zebra’s black stripes have been shaded black by dots that are placed very closely. But in the background, which is in the shape of a diamond, these dots are placed farther from each other with a consistent distance between them, creating a lighter shade of gray. Working on such zebra tattoos or all dotwork tattoos, in general, takes a lot of time and patience on the artist’s part. This tattoo is placed on the forearm.

In this tattoo, we can see a zebra taking a giant leap. The work and detailing on this tattoo is so polished, it appears as if the zebra tattoo has come to life. The zebra’s black stripes are more dense around the neck and become sparse as it goes lower. The tail flying in the air and the bent front legs are perfectly depicted here. You can place this tattoo horizontally on the upper arm to make the most of a wide canvas.

This is an example of a blackwork zebra tattoo, wherein the artist has ingeniously inked the Zebra in a surreal fashion. The Zebra’s neck ends in a sheet of cloth draped around the neck, with articulate folds hanging from it. The stripes of the Zebra have been inked very intricately and have a polished look. You can place this tattoo on the upper arm. You can get this beautiful piece of surrealist zebra tattoo personalised in way that is meaningful to you.

A unique take on a sausage and a zebra can be seen in this adorable and cartoonish zebra tattoo. The zebra’s torso or the core is depicted as a famous German sausage called the bratwurst, complete with mustard dressing. German people love this sausage which is a part of their regular food, generally eaten with bread. This love could’ve inspired the tattoo artist to make such a unique food zebra tattoo. The stripes of the Zebra are well-inked, as well as the tiny detailing on the sausage is complemented by the bright yellow of the mustard depicted in this funny zebra tattoo. This tattoo is a creative and hilarious way to combine your love for food and zebra tattoos. You can use a different, whimsical element with your zebra design. If you want a funny food pun and zebra tattoo, try this one!

Here are some additional Zebra and other animal inspired tattoos you use as inspiration and remember to discuss with the tattoo artists.

What do zebra tattoos represent?

How much do zebra tattoos cost?

The cost of a zebra tattoo varies depending on the size, complexity, and location of the tattoo. Generally speaking, however, zebra tattoos are not cheap. Expect to pay anywhere from $100 to $500 for a small zebra tattoo, and upwards of $1,000 for a large or complex tattoo.

How long does it take to get a zebra tattoo?

The time it takes to get a zebra tattoo depends on the size and complexity of the tattoo. A small, simple tattoo can be done in an hour or less, while a large or complex tattoo may take several hours to complete.

What are some things to consider before getting a zebra tattoo?

There are a few things to consider before getting a zebra tattoo. First, think about why you want the tattoo. What does it represent for you? Second, consider the location of the tattoo. Where on your body do you want it? And third, think about the cost. Zebra tattoos are not cheap, so be sure you are prepared to spend the money.