10 Best Yu Yu Hakusho Tattoo Ideas You Have To See To Believe! 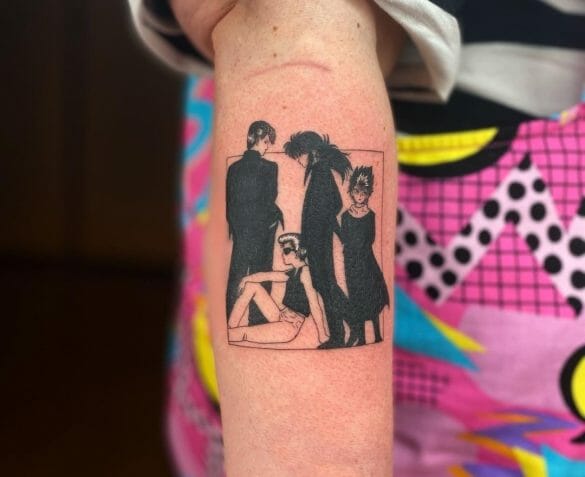 Want to know which are the best Yu Yu Hakusho tattoo ideas out there? Let’s find out!

It was originally a manga and then later became an anime adaptation. This manga series tells the story of the main character Yusuke Urameshi.

The manga and anime Yu Yu Hakusho portray how this young delinquent boy got struck by a car in the process of saving a child’s life. Later in his afterlife, you can see his character development as he gets named after the spirit detective by Botan and Koenma. This main character further goes on to investigate cases regarding apparitions and demons. The whole series revolves around the main character Yusuke Urameshi who travels with his friends who are Hiei, Kurama, and Kazuma Kuwabara. These are the other protagonists in the manga series. As the story of the manga progresses, the art style of the series changes from a detective to a fighting story of a battle against demons. It is the best anime out there with brilliant voice actors. If you want to get a tattoo of the main character or any other factors of this best anime and manga, this article will show you the ten best tattoos you can get!

Hiei is one of the main characters of this manga and anime series. He has a distant personality and is seen to be aloof most of the time. This tattoo done in all black inside a frame shows his serious demeanor well. You can also add his ghost files or poltergeist report here.

Although he may seem elusive, he does hold a certain amount of kinship and respect for the rest of his friends. If you have watched episodes of this show or read chapters of the manga, you will notice how Hiei remains unbiased towards his enemies. Hiei and Kurama, another main character you may have come across in episodes and chapters, are seen to be quite close to one another. If you relate to his manga and anime character or love Hiei’s story, you should get this tattoo design! It would look great as a neck, back, hand, arm, and upper chest tattoo.

This is a beautiful tattoo design of the main character Yusuke Urameshi. He is given the name of spirit detective from Botan and Koenma. He is given the task of protecting the human world from the threat of ghost. This tattoo done in black with some dot workaround is mesmerizing.

There are very few positive qualities of this character at the start of the manga and anime. In the beginning, he was a reckless street fighter and slowly progressed to become a defender of the world of humans. This character shows how he grew to become a better person. Yusuke’s personality is seen to be as plain stupid at times. Throughout the manga and anime, it is also shown how he has a desire to fight and avoids killing anyone if he can. An anime fan who wants to represent such a personality on their body should get this inked.

The anime and manga tattoo character present in this design is Yoko Kurama. The meaning of Yoko is a demon fox. He is one of the main protagonists of Yusuke. He is famously known for the story where he was wounded from being chased and putting his spirit in a newborn baby. This colored tattoo art is done beautifully, showing the complete details of this character.

He is known as the cunning and calculating character in the Japanese manga and anime series. He focuses on the situation given to him and knows how to look past his feelings carefully. He is known to be quite emotionally mature and is quick to recognize the mistakes and patterns of his opponents. He and his demon are seen to have quite different personalities in the anime. There are a lot of fearless characteristics of this character. If you relate to him, want to represent this twisted character, or love Kurama, getting this tattoo would be the perfect fit for you! Though it is usually made as a sleeve tattoo, you can get it in any other place according to your preferences.

The infamous character in the tattoo, Yusuke, is one of the Japanese anime and manga series Yu Yu Hakusho. Botan and Koenma give him the spirited detective name. It is a favorite tattoo design among anime fans as this character portrays excellent strength and fearlessness. He is also known for his great sense of fashion. This anime series is said to be one of the best series in the world of anime.

The colors and textures of this tattoo design are flawless. The detailing is done to perfection, and it looks pretty realistic. It is also a fun story to tell others why you chose this anime character specifically to get inked on your body. It can be made in size shown in the image or any other one. You can talk to your tattoo artist regarding it. It can also be customized according to how you want it, but this design perfectly represents what Yusuke is like. His smirk and stare-down eyes have been captured perfectly in the invention, and other elements add to the beauty of this anime tattoo design. Yusuke is known for his desire to fight, and this design shows how he is always ready to fight anyone out there.

This is a minimalistic tattoo design of Yusuke. It shows only his eyes in it, but it represents a lot more. It shows how he has a deep dark story of his life, showing its sadness in his eyes. It also portrays how he created himself to become a whole other person than what he was in the past.

The image may also show how he is supposed to spend his life dedicated to helping others and ready for any challenges. The character overall signifies strength, bravery, and courage. If someone wishes to represent such characteristics through this tattoo design or just loves manga and this anime character, this tattoo would be great for them. It isn’t that extravagant, yet it shows your love for the anime and how much this character means to you. It can also make for a great conversation starter as you can explain what these eyes signify and their origin. You can opt to get it in any size of your choice and also choose to get a colored version of this tattoo design. It would look amazing as a neck, back, arm, and side boob tattoo.

In the whole series of this manga and anime, Hiei is also quite famous, after Yusuke. He is a loved character by fans. The way his story has been written and portrayed in the anime series shows his complex character. It also represents that without his presence, the show would have had something missing. Thus, Hiei is a significant character in this beautiful anime series.

This tattoo design can be done in any area of the body apart from the arm. The arm was given as a suggestion because the tattoo design fits perfectly there, as seen in the image. The black and white ink of this Hiei tattoo represents who he is as a person ideally. The detailing of this character looks stunning, and the textures are soothing. It doesn’t necessarily have to be in size given in the image. Some people who want to portray their love for anime don’t want to get something too flashy. Getting this tattoo design in a smaller size would look just as good. This character is portrayed to be a loner but at the same time, has love and respect for his allies and friends. He would be a great anime character as a tattoo design.

This is another beautiful Hiei tattoo design for you to choose from. It shows how powerful the character is in this image and looks splendid as an overall design. This tattoo has the element of color in it as well.

It also has the element of the sword, which shows how the character fights with bravery. If you want to make it look more relaxed, you can ask your tattoo artist to add a dragon element to the design as well. It would look great as a back or upper chest tattoo. His teacher, whose name was Gentai, said that Yusuke was a genius in fighting. Though he is disliked by many of his teachers and his classmates fear him, he is a kind person who has been through many struggles in life.

It is a great way to show a representation of the show and looks quite aesthetically pleasing. It isn’t too flashy or extravagant, making it the perfect tattoo for someone looking for something simple. The subtle colors make the overall tattoo appear even more beautiful.

It is pretty eye-catching and very pleasing to look at. You can have a lot of fun with it by telling people why you chose this tattoo and fangirl over your love for anime. It is a simplicity to its finest. With the textures and detailing looking gorgeous, this is a great tattoo to go for!

This gorgeous Hiei tattoo design is one of the most popular anime tattoos. The way this design features the perfectionism that is this character is stunning. The vibe of Hiei here is of a dark gothic type who is a ghost fighter. It makes him look like a total badass.

The beautiful black and white outlining of this character portray how his character was written and looks as bold as this design. It brings out his personality in this and is just really cool. If you are a Yu Yu Hakusho fan or just a Hiei fan, getting this tattoo would be the best thing to do.

This is yet another stunning-looking tattoo that would leave people in shock and awe when they see it. If you are a hardcore anime fan of these characters, there isn’t any other tattoo than this that would be perfect for you. This is a full-arm sleeve tattoo of the series characters that looks very realistic and tells a story. Hiei is also close to Yusuke and, from all his friends, has the most squabbles with Kuwabara. He has quite a reputation as a killer of being notorious in the demon world. Despite this, he suffers from struggles of abandonment and of his identity. It is also a great representation of what the show is about, so in a way, you are bringing in more Yu Yu Hakusho fans in the world.