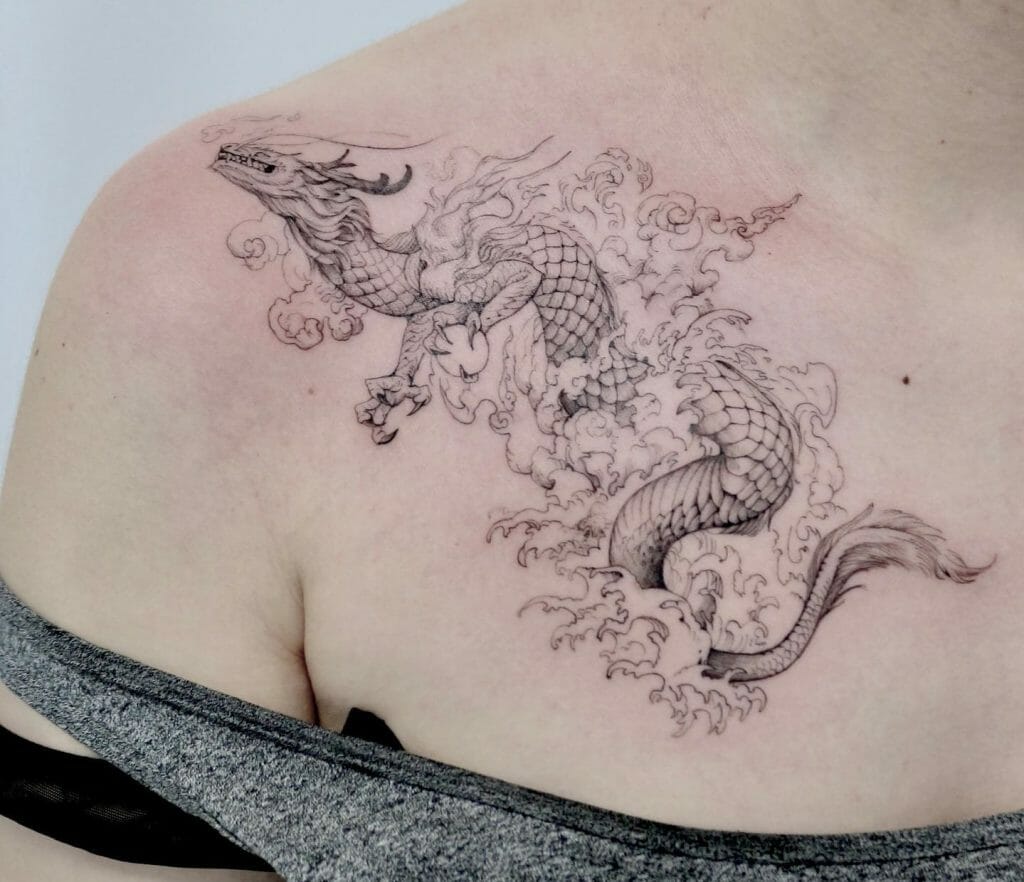 Do you look at dragons in awe and love their majestic nature? Here are some enchanting women’s feminine dragon tattoo ideas that are very inspirational!

Dragons are mythical creatures which are an inspiration in Celtic art.

According to Chinese culture, dragons are considered to be spells cast against evil for protection, power and wisdom. The Chinese and other Eastern countries consider dragons to be sacred and make a wonderful ally against a fierce enemy.

As per Japanese mythology, sea serpents, dragons, and phoenixes exist. They consider these animals to be fierce and strengthen them. As per the Western culture, dragons are considered to be the symbol of strength, grace and intelligence. Dragons have existed around the ancient civilizations of the world. There have been several paintings and historical scriptures of different cultures which mention the existence of the dragon as a mythical creature. Because of this evidence, dragons are considered to be the ambassadors of good fortune and strengthen the wearer of tattoos.

Dragon tattoos are vastly popular around the world. Feminine dragon tattoos symbolise fearlessness, rage, passion and wisdom. Women have gotten the zeal to get dragon tattoos after the commencement of Game of Thrones. Women like getting these tattoos to feel powerful and fierce. It is also thought of as a lucky charm as well.

Feminine dragon tattoos can be made in exotic places like forearm, ankles, shoulders, neck, hips, thighs and other distinctive places where the wearer likes!

The tattoo is wrapping up the entire arm of the wearer. Between the plumages of the dragon, there are cherry blossoms or commonly known as red Sakura flowers. These flowers are made with hues of red as a shading method for filling the petals. The dragon’s face looks really fierce and looks like it is about to take a flight. The tattoo looks very simple yet majestic and one can really opt for this particular tattoo.

This tattoo is also a fine example of a Chinese dragon tattoo embedded with cherry blossoms or the Sakura flower. The plumage of the dragon looks like any generic Chinese dragon. The flowers are made with red ink to give it a definition of the Sakura flowers. The placement of the body art is on the forearm and it looks really majestic and nice. The detailing of the dragon scales is done with hues of black and grey colours which enhances the minimalism of the tattoo altogether. The dragon looks to be still perhaps it is getting ready for a flight soon enough.

Chinese dragon tattoo designs for women look really majestic altogether. One can get this tattoo on any part of the body and it will look equally majestic.

Ankle tattoos signify the strength and new beginnings of a journey. The dragon tattoo on the ankle is a combination of strength, power and the start of a new journey. This is a very generic dragon tattoo with black ink and flowers on its plumage. The flowers can be assumed to be petunia and the interior structure of the flower looks really beautiful and intricate. From the plumage to the tail there are several flowers down the dragon.

The body of the dragon is filled with black ink. The wings have an ombre work of grey and black hues. The dragon is flying up to the moon. The moon is outlined with a dot-like structure which enhances its crescent shape of it. The dot work has been done beautifully and looks really majestic. The dragon looks really beautiful overall.

This tattoo is simplistic and made really beautifully with only the use of black ink. This is not a traditional dragon tattoo design but a small dragon tattoo inspired by western cultures. The dragon’s head looks really fierce and it seems to be in an attacking mode. The tattoo artist has really done a commendable job in making this exceptionally beautiful dragon tattoo. Chinese and Japanese dragon tattoos resemble a shape of a snake. In western style dragon tattoos, the dragon has an entire body with devil-like wings which pose resemble bat wings.

This particular tattoo here is a modernised dragon tattoo with intricate work at the plumage in form of scales. The tail of the dragon also resembles a thorny and scaly structure which is a common feature in western culture dragon tattoos. The wings look really ragged which enhances the gothic look of the dragon. The wings are done with shades of black and grey and the tattoo artist has been impeccable with their inking styles. It seems like the dragon is taking a flight and is ready to attack. The concentric circles above the wings of the dragon send that message.

The moon is a full moon and looks really well with the white ink work made on it. The clouds are made with dotted patchwork and look absolutely fantastic to look at. The dragon has an interesting plumage. The dragon head looks really majestic as well. The scale work and the horns look really fierce. The scenery has been really made beautifully and one can definitely get on board with this.

This particular tattoo is of Chinese and Japanese dragon tattoo design. The dragon resembles the shape of a snake and looks really beautiful. This resembles the idea of tribal dragon tattoos and is inclined towards the concept of tribal tattoo art. The tattoo is made with red ink and it encompasses the shoulder cup and the entire upper arm. The tail of the dragon is very thick and made with structures of scales. The entire body of the dragon is made with diamond-shaped scales which are very detailed.

A dragon tattoo on a shoulder cup till arm means a fierce and powerful approach by taking up a lot of responsibilities. The head of the dragon looks really nice. It seems like the dragon is angry and is ready to attack. This can symbolise that the wearer is ready to take any risks despite the adversities which might come towards them.

This particular tattoo is based upon a woman warrior. The dragon tattoo which can be seen in this image is inspired by Chinese dragons and Japanese dragons. The woman has a traditional Chinese or Japanese dress on her and the dragon looks really generic like the drawings in mythological books of the Asian countries.  The tail of the dragon is very thin and is made with black ink.

The dragon scales are made with uneven quadrilateral structures which really enhances the look of the scales of the dragon. There are two simple lines of red ink which give detail to the dress the woman has been wearing in this image. The symbolism of this tattoo is that the wearer is ready to take up any challenges that come their way and can confront them without any fear.

Yin Yang is a concept of unity and serenity according to Chinese philosophies. It dates back to ancient times for its principles of philosophy and cosmology. Yin Yang generally means good in bad and vice versa.

A Yin Yang tattoo looks really good on any part of the body. This particular tattoo is placed on the back of the woman along with a blue dragon inspired by Asian mythology. The dragon is made with blue ink and has made a circular structure. The scales are made in diamond and quadrilateral structures which makes the scale look really beautiful and realistic. The tail of the tattoo is getting gradually thinner after reaching the full circle. The claws or talons of the dragon look really sharp and fierce. The tattoo symbolises that the wearer is ready to take up challenges and she finally has tried to restore unity and sanity in herself.

Game of Thrones is a globally famous series. It is a very intriguing series and has been really famous in popular culture. Dragons are one of the top attractions of the show. This image and tattoo on the wearer tell that story. In this particular image, the dragon which has been made is based on the dragon called Drogon. It is the main dragon of the show. Danaerys used to ride on this dragon and she named the dragon after her late husband, Khal Drogo.

The dragon that has been made in this tattoo looks absolutely stunning. There is attention to detail and looks really realistic even if it is not coloured. The tattoo artist has been really skilful that it has been really easy to recognise the dragon to be Drogon. The plumage of the dragon looks really scaly just like in the series and the genius of the tattoo artist in this is really commendable. If you love Game of Thrones, and House Targaryen, you know what tattoo to make.

Behind The Ear Three Dragon Tattoos For Women

Behind the ears is one of the desirable places to get a tattoo for women. The tattoo looks really beautiful and absolutely enchanting. The dragons are really tiny and cute which makes it easier for the tattoo artist to make them. The wing work I’d however really commendable. This tattoo has been inspired by Emilia Clarke from Game of Thrones and is really a beautiful way to honour her memory as an amazingly fierce character in the show. The dragons really look super cute and absolutely loveable!

Dragon tattoos cause a lot of controversy among people. Here are some amazing inspirations which are equally enticing like feminine dragon tattoos. They are:

What is a feminine dragon tattoo?

A feminine dragon tattoo is a tattoo of a dragon that has been specifically designed to appeal to women. This can include adding feminine features to the dragon, such as making it smaller and more delicate, or adding flowery or other girly elements to the design.

How do I choose a feminine dragon tattoo design?

What are some of the most popular feminine dragon tattoo designs?

Some of the most popular feminine dragon tattoo designs include small, delicate dragons, colorful dragons, and dragons with other girly elements such as flowers or stars.

What are some of the best places to get a feminine dragon tattoo?

Some of the best places to get a feminine dragon tattoo include the upper back, the lower back, the sides, and the stomach. These are all areas that allow for a large tattoo design without it being too intrusive or uncomfortable.

What are some common misconceptions about feminine dragon tattoos?