101 Best Wolf Skull Tattoo Ideas You Have To See To Believe! 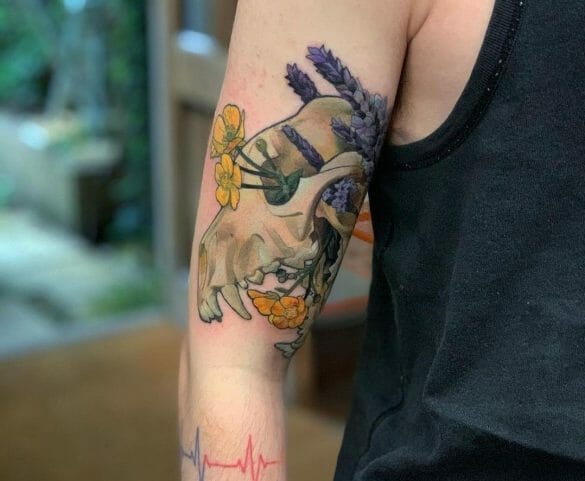 Hey friend! Are you looking for a cool skull tattoo? Why don’t you try the wolf skull? Here are the 10 best wolf skull tattoo ideas you can choose from.

Wolf and Skull tattoos are some of the most fantastic animal tattoos.

If you are not already considering getting a wolf skull tattoo, you would surely want to get one after seeing these wolf and skull tattoo designs.

But, first, do you want to know what a wolf skull tattoo means? Well, a wolf signifies guidance and loyalty, and the skull symbolizes death. A wolf and head together represent the understanding of death and the afterlife. These tattoos also signify the experience of the afterlife and the power beyond just a physical being. A wolf skull is also considered a spiritual guide, as they guide and lead the pack. These tattoos represent the philosophical aspects of life with such beauty. Do you know that wolf eyes are considered supernatural eyes? Isn’t it incredible that such a badass tattoo has such a deep meaning? You should probably think of getting a hunting wolf skull tattoo to show everyone how deep this thing means.

You can consider a Celtic wolf tattoo, or a family of wolves, or a tribal wolf skull tattoo. So, here have a look at some of the best wolf skull tattoos so you can choose a perfect fit for your personality.

The wolf skull in this tattoo is engulfed in black flames all around. The wolf skull has black, hollow eyes and sharped, white teeth below. This lone wolf skull tattoo signifies leadership and loyalty. This is because wolves always lead the pack and are considered good leaders. You can get this tattoo to show your leadership skills and impress everyone around you. This fantastic-looking wolf tattoo can be created in any size. This will look so good, especially on your arm and wrist. You can show this lone wolf skull tattoo design to your tattoo artist and create your own mysterious wolf tattoo.

What an excellent and gorgeous idea to show leadership and beauty together! This is one of the unique and elegant wolf skull tattoo designs. It shows the lone wolf’s spiritual side. This tattoo is not like the deadly ones but has a nice and decent look. The crystals look like the full moon, which has strong associations with wolves. The two flower stems with leaves appear as if they are dangling from the wolf’s skull, one on each side. The wolf skull itself is quite detailed in black dot work. It will represent bold leader in you as well as your calm and steady side.

If you are looking for a haunting wolf skull with a touch of smoke, take a look at this captivating wolf skull tattoo. This wolf skull tattoo is placed on the arm and shows smoke around the wolf skull. The skull is attached to Maine with long hair. This innovative and unique form of wolf skull tattoo represents the fearless nature of these creatures. Wolves are also used to symbolize working outside the laws and not taking orders from anyone. These creatures howl under the full moon with no fear and are not afraid of anyone. This smoky wolf is perfect for showing your stubborn and fierce side, which you use to help others when no one is there for them. This tattoo will earn a special place in your heart. Don’t you think this tattoo looks so amazing on your muscular chest or pumped-up biceps?

Aah! So deadly, scary yet artistic to look at! This is such a great representation of a wolf and a skull. The wolf skull is drawn in a simple black black outline in freehand. But inside it, the wolf’s mouth is filled in a flashy, blood-red colour. The red color represents danger, power, strength, and determination. It can also symbolise the wearer’s passion, desire, and love. It gives a sense of the untamed nature of the wolves. What a beautiful and dangerous-looking tattoo this is. This tattoo will look equally good on both men and women. How can you say no to this scary, powerful, and wild tattoo that symbolizes positivity?

This is an adorable and humorous tattoo, disguised behind a scary wolf skull. In this tattoo, we see an adorable bunny playing a prank and trying to scare others by wearing a wolf skull on its head. The wolf skull appears to be tied with a thread at the back of the head in a bow tie style. The bunny’s long ears are quite visible behind the skull. And the fluffy paws and soft tail are the cherry on top in this delightful tattoo design. The wolf skull is inked in black lined and dot shading. The skull has black holes in the place of eyes.

Wolf tattoos are always believed to have scary and dangerous looks, but this cute lil devil shows a lovable tattoo design. This tattoo is placed on the side of the torso and makes good use of the space. If you relate to the little prankster, you can get this cute and yet fierce wolf skull tattoo.

What’s better than a single wolf skull? Try three! The power, danger and passion symbolised by a wolf tattoo are tripled here with these three wolf skulls. The number three is associated with good luck. Also, the red color, which is associated with love, passion, and determination, compliments the concept of this tattoo. In this tattoo, you can see that the wolves are tied with a chain, but they are powerful enough to break the chain and escape. This shows the uncontrollable and untamed nature of wolves. This wolf skull tattoo is for those not born to follow orders but to lead the pack.

Most wolf skull tattoos are detailed and colourful as they reflect the wolves’ wild nature. But this simple black outline does it in a minimal way. Inked on the chest, the wolf skull is placed in center with two antlers right below it, on each side. Antlers are the symbols of fertility and growth. This is a great way to incorporate a wolf skull as part of a larger animal sleeve tattoo. You can place this tattoo on the back as well, if you prefer.

The deadly-looking wolf skull is inked entirely in black and flowers behind are drawn in a soothing aqua colour with a black stem. This is such a beautiful tattoo for the ones who balance their diverse nature to maintain peace and harmony in their life. This tattoo is placed on the inside of the upper arm. But you may choose to get this design on the wrist or ankle as well. Also, this tattoo is a small one which is an excellent choice for those who do not want to a large tattoo.

Half Celtic Wolf Tattoo With Skull

What a unique concept of a wolf and skull tattoo with so many hidden meanings. Usually, the wolf skull is shown as a complete skull or inside the mouth of the wolf. But this one depicted the transformation of wolf and skull. The wolf and skull both have their unique aspects. The wolf shows leadership, boldness, protection, and fierce things, while the skull shows death, the afterlife, and the world beyond our knowledge and experience. Together, it make as fantastic tattoo combo. This tattoo also shows loyalty which is highly associated with wolves. Bright red flowers above and below the wold design gives a royal look this tattoo. This wolf skull tattoo has a decorate, golden jewel on the forehead. The wolf’s eye is white, while the skull’s eye is hollow and has smoke coming out of it.

This wolf skull tattoo blends a white wolf skull design with purple lavenders. The lavender flowers here symbolize calmness, gentleness, silence, and healing. The skull shows the importance of the afterlife and the world beyond, and the lavender represents grace, devotion, and serenity. Together, it forms a powerful and spiritual combination of life. This is an excellent tattoo idea to express a person’s philosophy in life. You can replace lavenders with different flowers that are meaningful to you. This tattoo is placed on the upper arm, right below the shoulder blade.

In recent years, the wolf tattoo has been adapted in different styles. A wolf and skull tattoo carries a sense of mystery. If you are looking for more wolf tattoo designs to inspire your own, check out our suggestions below: